That is the question. And G-Vee doesn’t have the answer.

Back in ‘Blighty' after frolicking on the French Riviera, The Blogfather returns bang on form by laying into Gary Vee’s tireless guff at Cannes, before getting stuck into why you shouldn’t pull the plug on TV.

It’s been a fortnight since ad land descended on the Cote d’Azur for Cannes Lions Festival. So, why am I only writing about it now? Well, a tax-related rendezvous with the French Fuzz and my faithful Fedora being consigned to oblivion in Heathrow’s latest ghastly attraction, “baggage mountain”, derailed my plans. Zut alors.

Before that, my trip to the annual catwalk fashion moment of the industry ran smoothly, unlike most of the work on show, which has not actually run anywhere at all and most likely never will.

An exception though, was Burger King, who once again rubbed their mouldy buns in our faces. Mouldy Whopper, a campaign I wrote on two and a half years ago, won Creative Effectiveness Gold. I’ve not got intel on the judging criteria, but it was certainly effective in eliciting an encore from my hors d'oeuvres.

Whilst my own Tour de France had no Champs-Élysées, bicycles or dimwit trying to get on TV with a cardboard sign, it did have Paris, a ton of pedalling, and a dimwit with a microphone.

Unfortunately, it was Paris Hilton*, flanked by “the tireless mouth” Gary ‘Vee’ Vaynerchuk, both pedalling total sh!te. I’ll let you decide who’s the dimwit from that duo. Tough call.

*Seriously, does anyone know why she was there?

Top B2B marketer Graeme Fraser was in the room and revealed to Twitter that Gary Vee had “announced at Cannes that not a single person on earth is consuming a TV commercial”.

So Gary Vee, sitting next to Paris Hilton, announced at Cannes that not a single person on earth is consuming a TV commercial.

The full sh!te-spiel from Gary was:

My earlier dimwit comment was unfair. I don’t doubt that Gary’s a smart man. And he’s got the success and deluded adoring fans to show for it. His patter on NFTs is more WTF for an old-fashioned fella like me. But his first point is bang on.

All else being equal, funny ads are much more effective. Ad land’s favourite double act, Binet and Field (no, not these two knuckleheads), analysed 243 campaigns from 2012 to 2020 and found that those using humour tended to be most effective. On average, they had 1.7 very large business effects, versus 1.4 for less funny ones. 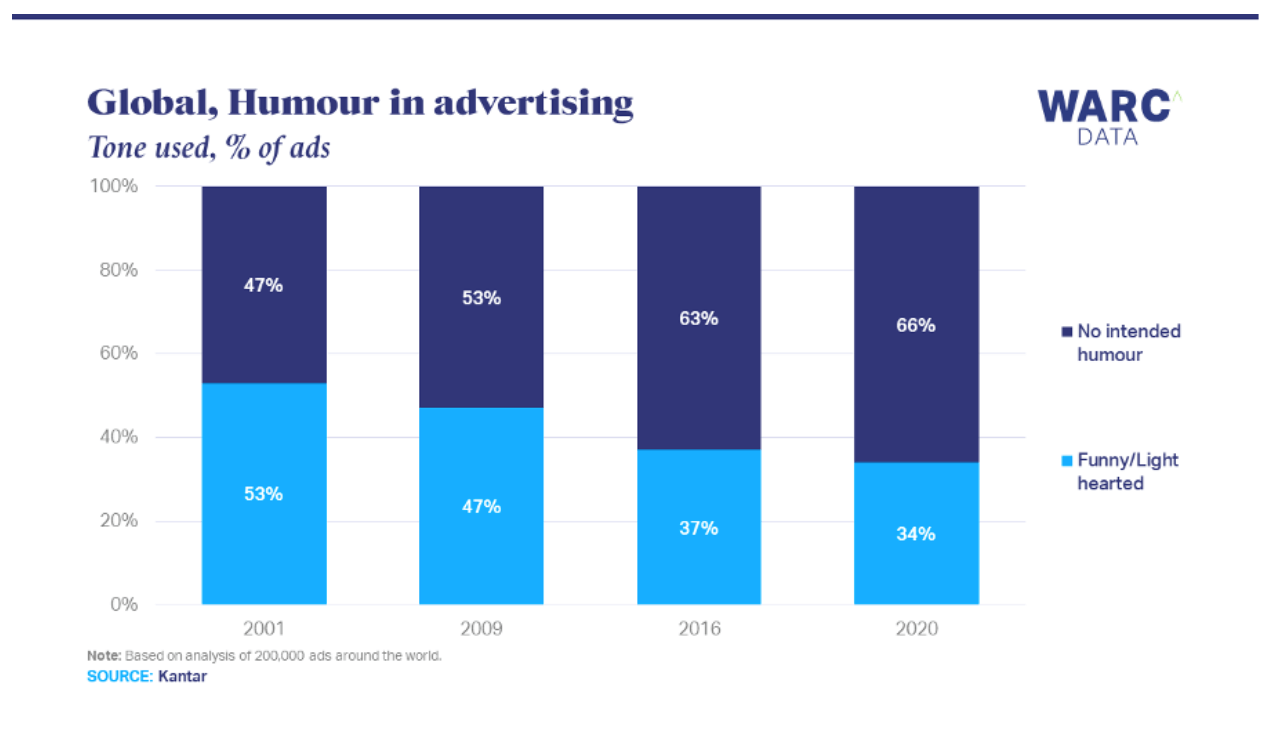 That’s enough time spent agreeing with Gary. Now, let’s get onto his second point. The one about no one on earth consuming TV commercials. Yeah, that one. Vayner-Guff.

Mark Ritson warned us back in 2018 in this article;

“Vaynerchuk shows that nobody, and he means nobody, watches traditional network TV anymore and that most have shifted their viewing to VOD options like YouTube and Netflix. As a result, he concludes that “70% or 80%” of the population don’t even have the chance to see a TV ad and that, as a result, the $80bn spent this year in America is wasted.

Too many marketers over the past decade have made the same mistake and used their own viewing behaviour and that of their industry friends to make media decisions and predictions that wildly underestimate the reach, impact and longevity of TV advertising.”

Perhaps most worrying of all, Mark highlights, is that he has “millions of followers across LinkedIn, Twitter, Facebook, YouTube and Instagram – where he is known as Gary Vee – mean that more people learn from Vaynerchuk on a typical day than the combined total of students who settle down for a marketing lecture at the universities across the planet.”

If it isn’t blatantly obvious, he’s wrong about TV. Here’s a few reasons why.

The lovely folk at Thinkbox have some neat nickable charts with the latest stats on how much TV is being watched. Spoiler alert Gary, it’s not none.

Viewing hours have returned to pre-pandemic levels and broadcaster TV accounts for 58% of our video day. In total, 2.2 billion TV ads are seen in the UK every day and 65% of adults watch over 50 linear ads a week. 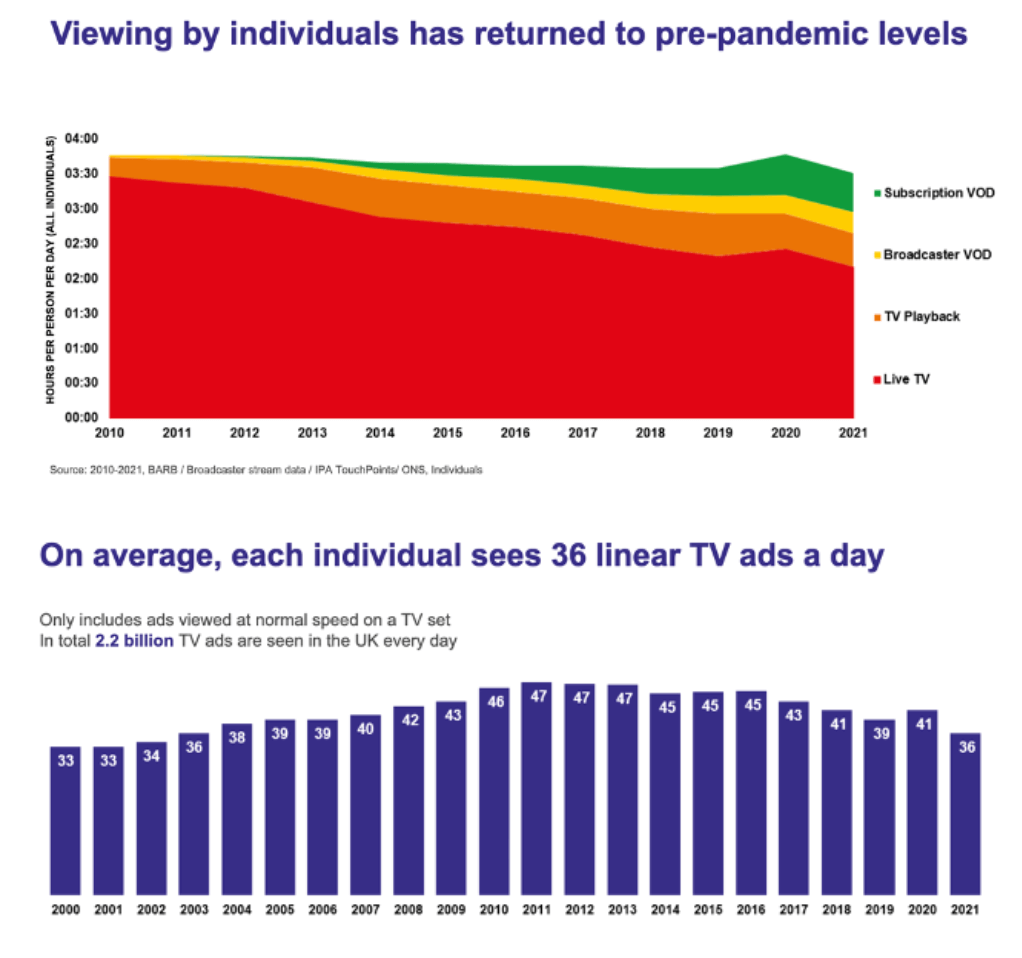 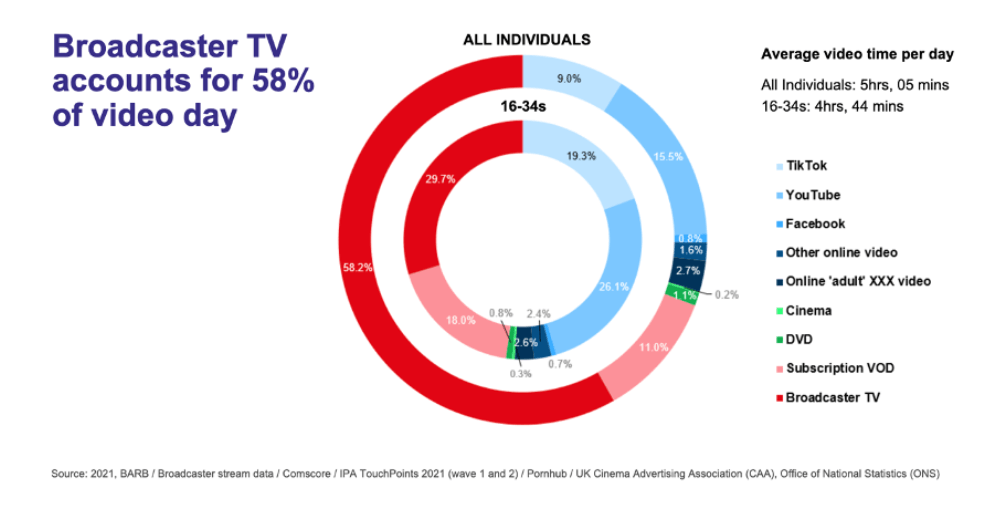 Whilst newer video on demand (VOD) options are gaining popularity, it still loses out to TV when it comes to what Brits are watching. Mark Ritson said it best;

“None of this fits with my personal behaviour. I hardly watch any TV of any kind. But I am able, unlike Vaynerchuk, to read a pie chart and appreciate that my own personal viewing is not representative of the world”.

2) Look to the peacock’s extravagant plumage

Our latest Call to Action pod guest, Alex Murrell, spoke to us on this.

He argues, on the idea that mass broadcast advertising is wasteful, that the drive towards more efficient media is due to three perceptions about digital: it’s cheaper, targeted and measurable response.

Alex is a mighty clever chap and chirps back that those things aren’t critiques or weaknesses, but points of strength. Being expensive, being mass and being ignored might just be a good thing.

Every year at Superbowl time, there’s a deluge of articles around the price of a 30 second spot and what you could get for that in other channels. But Alex points out, this argument misses a crucial point. One cracked by Darwin in 1859.

“The ornate tail feathers of the peacock or large antlers of a stag are signs of fitness. That these animals are so strong that they can afford to waste resources. They can survive despite their physical encumbrances. And that that would make them a more attractive mate because they were signals of their strength and prowess. Brands and high spend perform a similar role. The huge cost of the Superbowl ad is a signal to an audience that that brand is strong and financially stable and is confident and likely to go on being that for a long time to come.”

Even if a broadcast TV audience are completely uninterested in your ad. It’s not wasted. Alex uses Mercedes as an example. A huge proportion of the audience won’t be able to buy one. Thinking of this as waste would ignore the role of signaling and the self-expressive role of brands. If you’re seen driving a Mercedes, it communicates something about your financial status or sense of style.

As Alex says in his article The Errors of Efficiency;

And that means a ton of people need to see it. A highly targeted ad on Instagram can’t have the same effect, as you’re none the wiser as to whether other folk are seeing it too.

It usually takes a serious shakedown to get The Blogfather to admit anything. But as you’ve read this far, I’ll tell you. Keep it in the family though. Kapish?

Every night, I sit down to watch Love Island with my girlfriend, Katy. Other than talking to me, she’s totally removed from ad land. She doesn’t know her Ritson from her Sharp. Seriously.

Every ad break she groans and casts her attention elsewhere. Usually Twitter, to see if other people think Tasha is totally making Andrew look like a mug.

Alex acknowledged the criticism that mass media is wasteful because it’s often ignored. Attention expert and Call to Action alumni, Professor Karen Nelson-Field, has research to prove it. She found that video ads on Instagram received active attention for 89% of their duration. Facebook ads scored 48%. And dead last was broadcast TV with viewers only paying attention for 35% of the time.

But what if being ignored isn’t a bad thing. Katy ignores ads. But she’ll warble along to the Just Eat jingle. And tell me how much she likes the funny lizards. 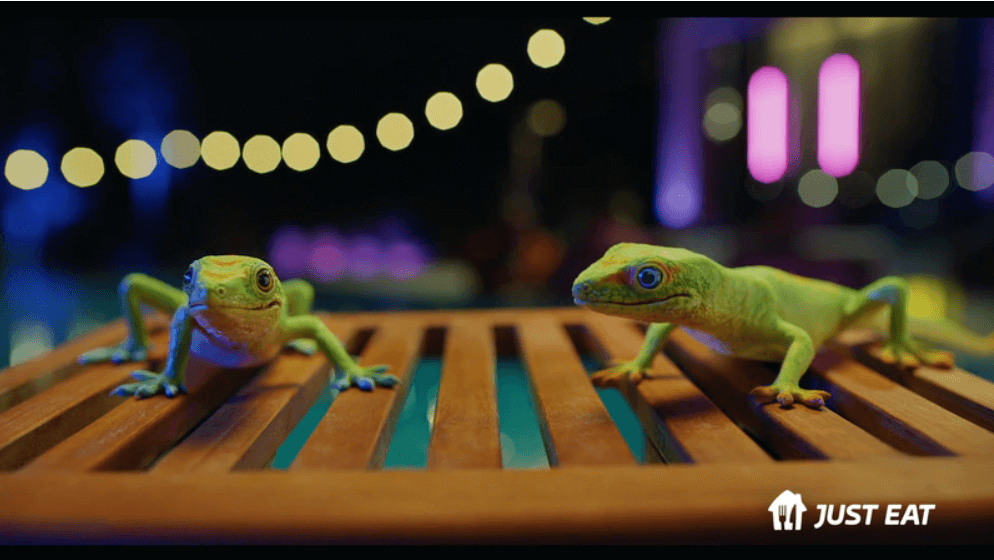 Alex told us of an experiment, mentioned in The Choice Factory by Richard Shotton;

“Festinger and Nathan Maccoby, academics at Stanford University, recruited members of college fraternities. They played those students an audio argument about why fraternities were morally wrong. The recording was played in two different scenarios: students either heard it on its own or they watched a silent film at the same time. After the students had heard the recording, the Stanford psychologists questioned them as to how far their views had shifted. Those who had heard the argument at the same time as the silent film were more likely to have changed their opinion."

Implying that when we’re distracted, we’re not able to generate counter-arguments. Our defenses are down. Said best by Paul Feldwick;

"When we don’t notice we are being influenced, we cannot argue back."

Perhaps advertisers should “couple up” with the subconscious. As Alex said on Call to Action;

“An inattentive audience soaks up our distinctive brand assets and our messages and the tone of voice we deliver a message in. All of that gets soaked up and lodges itself in the subconscious and long-term memory without ever deeply processing the message.”

Seriously, just check out this experiment by a baby-faced Derren Brown to see how even ad folk aren’t immune to the tricks of the subconscious.

So, even if, like my girlfriend, you’re baffled by the fact Lorraine is sponsored by Nesquik. Or think Gala Bingo just “wasted half a minute” of your life. Sorry Gala Bingo, she’s savage. Don’t pull the plug on TV yet. Alex summarizes it best:

Or as Tim Ambler famously put it: “The waste in advertising is the part that works.”

The Blogfather goes off on a ChuckleVision/advert jingle tangent before reining it back in to tell you why you really need to sort out your purchase funnel, sunshine.

The Blogfather gets right royally stuck into the topic of what makes a good ad and how the hell do you measure it this week, falling arse-first down a rabbit hole of ad efficiency & effectiveness, wastage, attention as a metric and more.

The Blogfather takes the fight to short-termism, an AI bot named Lucy, and rallies with the likes of Ritson, Binet & Field, and Hoffman to champion the TV Ad.