The Blogfather fires off a volley from the broadside bronze cannons to sink the boardroom bast*rds at P&O Ferries this week, as part of a larger rant on how nothing much has really changed the last two years.

"We all sat at home and completed Netflix in 3 months and gave Amazon Prime the elbow after the one month free trial period."

Remember all that talk about the new normal? How digital transformation would be accelerated by Covid. The high street would definitely die this time. ‘More digital!’ cried the short-term shiny thing peddlers.

And sure, for a while, things did change quite dramatically, with some severe short-term upheaval. Retail and hospitality are still trying to recover. Cinemas, and other sectors, took a right bashing, as we all sat at home and completed Netflix in 3 months and gave Amazon Prime the elbow after the one month free trial period.

Yet for all the short term shocks to the system, a lot of bollocks was also said, not least by this herbert, Martin Lindstrom:

“This change is so profound,” he said in 2020, “that one can talk about a global synchronisation of human behaviour establishing a completely new, universal change of consumer patterns.”

This is a man whose bollocks-talking levels are so high, that the BS detector extraordinaire Mark Ritson read all of Martin’s Covid-era spiel purely out of a morbid yet heart-warming fascination (Mark tells you more about this in his blog this week)

But this kind of hyperbole swept through all forms of media; a communal diving headfirst onto a free-wheeling change bandwagon that was not helpful to anyone.

Why did this hyperbole swirl around our industry? As Mark Ritson puts it in his usual succinct way:

“Our discipline is obsessed with the pornography of change. And Lindstrom is the Larry Flint of this whole misalignment.”

So, as everyone piled onto Zoom for business meetings, loads of chumps started predicting huge Covid-produced, irreversible long-term change; both the decline and death of various facets of society, or massive growth.

"Escalators on the Tube now have ads for theatre shows and household brands again, rather than…"

Looking around now, there’s not too much evidence left of what we went through over the last two years; just dog-eared floor vinyls, imploring us in vain to still keep a two-metre distance (the print firms did make some serious hay for a bit).

But most stuff has stayed the same, or rather returned to normal after a huge blip. A walk up from the depths of the tube at Paddington station now reveals escalator ads for theatre shows and household brands again, rather than ads for bitcoin and empty ad spaces. The concourse Caffe Nero has resumed its rather enigmatic character of ‘is it one queue, two queues or a bar-style free-for-all?’

Ritson’s latest blog has some more great graphs (detailing Zoom’s share price fluctuations, Google searches for men’s suits, and UK cinema audiences) that demonstrate how things have, pretty much, returned to normality. And old school normality at that. 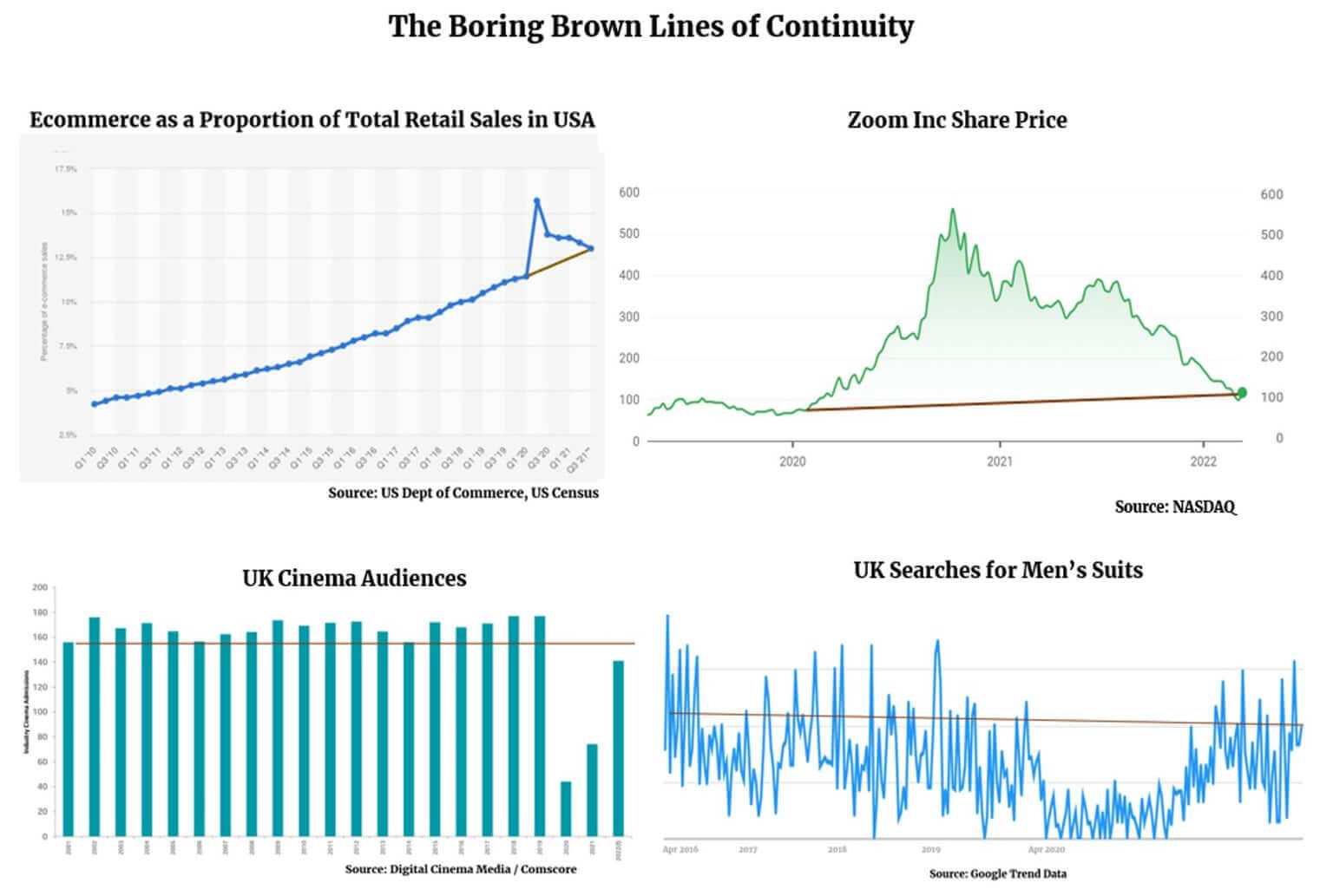 “Zoom out of the dramatic changes of Q1 2020 and look before and after them, and you clearly see broader themes now being restored...it’s clear that business as usual is gradually becoming business as usual again…the boring brown line of continuity is pointing back to normality and a future that is different, but not too different, from the past.”

As is often the case, there is a lot more nuance to reality. There are also some things that have seemingly changed for the long term. …Gasp! is actually rolling with the hybrid working vibe. The QR code has had a resurrection, so much so, it has now made it onto mainstream TV, as ITV are now using QR Codes on ad slots for brands like Moonpig. This follows on from the lauded Super Bowl ad from Coinbase that literally was just a QR Code pinging around the screen Pong style. Maybe Ad land is finally convinced of their usefulness.

We are also certainly more of a cashless society, with some businesses still not accepting cash. The contactless card limit is now £100, resulting in a tonne of impulse buys that now sit piled up in The Blogfather’s spare room (thankfully there is still a black market for flogging all that).

So things are changing, just not at the fast pace that some would try and hoodwink you with. A quote that is akin to a mantra and a regular reality check at Gasp is this one from Bill Bernbach:

“It took millions of years for man’s instincts to develop. It will take millions more for them to even vary. It is fashionable to talk about the changing man. A communicator must be concerned with the unchanging man, with his obsessive drive to survive, to be admired, to succeed, to love, to take care of his own.”

Attention spans are not necessarily shorter, something our recent pod guest Professor Karen Nelson-Field spoke of whilst discussing the attention metric.

Unfortunately, the last two years did see some big companies and brands go out of business while others had to make tough decisions on cutbacks, but there is a right way and a wrong way to go about it. Or rather, a legal and illegal way to go about it. Cue stage left, P&O Ferries. Another thing that doesn't change is the ability for market-dominant brands to act like complete arseholes.

"It’s easy to change your social avatar in support of Black Lives Matter, but less easy and likely for someone to actually carry out an action that does good."

With Boris stating it looks like they have acted illegally, and with millions of pound in fines potentially coming their way, you’d expect this to be certainly damaging to the bottom line of P&O Ferries, but also their brand reputation. Yet as PR specialist Mark Borkowski perceptively observes:

“We’ve witnessed Wetherspoons’ mass sackings, Amazon’s mass-exploitation of workers, RyanAir’s decades of customer service horror stories, Google slyly but – perhaps fittingly disavow its promise not to be evil, and Brewdog allegedly mistreat its own staff, undercut its supporters, and mislead the public, among a series of misdemeanours.

Even Facebook, perhaps the most scandal-riven of Big Tech’s oligopoly, could ride out its bad PR with a simple rebrand.

History is littered with examples, but even in the age of ‘cancel culture’ a PR scandal does not lastingly and damagingly impact brands that dominate their respective markets.”

So P&O Ferries may not suffer too much in the long term, which could largely be down to the behavioural trend of people just getting bored of controversies surrounding big business behaving badly. Most will do little more than an eye-roll, and not boycott P&O. Or they will for a bit, until they need the cheapest ferry provider. But the same can be said of the public’s reaction to events that inspire positive change. It’s easy to change your social avatar in support of Black Lives Matter, but less easy and likely for someone to actually carry out an action that does good. This doesn’t mean they are bad people, everyone just has their own lives to lead and their own problems to deal with.

As a by-product of this controversy, however, P&O Cruises is definitely copping some short-term collateral damage right now. They’ve had to respond to abuse from members of the public on social media, to clarify that despite having the same P&O name, it is not linked to the ferry company, with them being owned by the Carnival Corporation. This is a timely reminder that, for all your planning, sometimes things happen that are entirely out of your control and cannot be predicted.

When Covid struck, everyone assumed Corona beer sales would drop due to its name being unfortunately similar to Coronavirus. There is quite a lot of misinformation about this (standard for the internet), but whilst their share price did initially drop markedly as the same fear swept investors, sales actually went up 40%, and Corona is the world’s most valuable beer brand (valued at $5.8bn, as of 2021).

As you’ve probably picked up on, Gasp is very much in the ‘things change slowly’ camp, and has been for years. But with good reason and logic. To some degree, it helps to define our approach to marketing. We certainly don’t go off chasing the latest shiny new short-term activation with no thought on whether it fits the strategy.

We don’t zig just because everyone else zags. We do it because our industry has become a playground for charlatans selling their wares. The sky is not falling (OK, maybe a few cracks appeared in the last two years). People are people, and our habits and desires evolve at a rate that is barely noticeable over thousands of years.

So keep calm, and carry on doing proper marketing. And of course, we’re partial to you doing a bit of that with us.

Here’s a hot off the press, a brand-spanking* case study to whet your appetite following the 3 proper marketing stages of Research, Strategy, Tactics.

*We may be media neutral, but we draw a line at spanking brands.**

The Blogfather gets right royally stuck into the topic of what makes a good ad and how the hell do you measure it this week, falling arse-first down a rabbit hole of ad efficiency & effectiveness, wastage, attention as a metric and more.

The Blogfather’s had enough of too much linear thinking and hyperbole about ‘change’ in the time of COVID-19, so he’s got a learned rabble together, dusted down the sawn off and gone after it.

The Blogfather gets his opinionated chops stuck into the succulent subject of TikTok this week. What the Dickens is it, is it much cop, and should you be considering it as a serious marketing tactic?