Scrolling through a mucky, murky world.

The Blogfather descends into the murky underworld of digital advertising this week, dissecting an advert for Peroni, and another that appears to be intent on blackening Bear Grylls’ good name.

Here’s a brand-new game that anybody can play: guess the landing page of the dubious digital ad.

This is the ad in question: 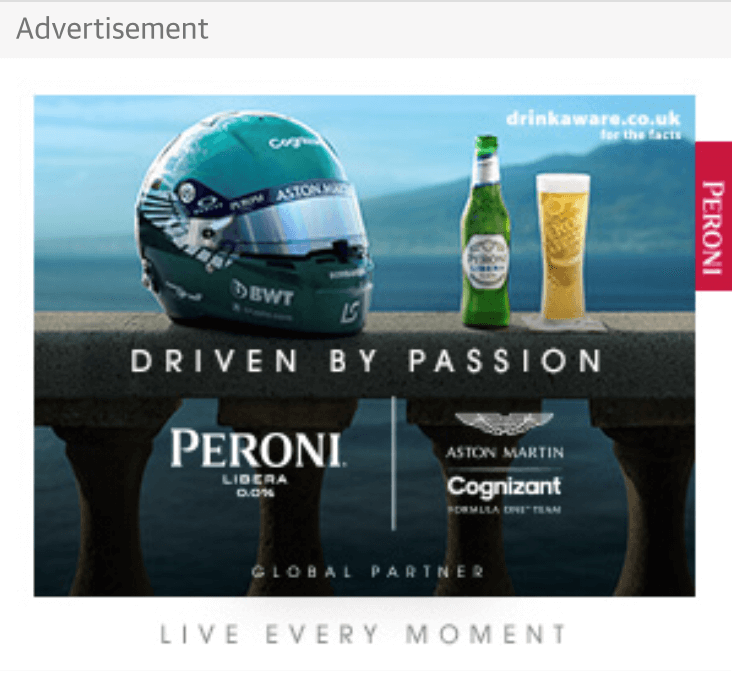 With the sprawling view of a Mediterranean coastal resort, you’d be forgiven for thinking it would take you somewhere premium, something a bit classy. Ah, but this is digital advertising, remember. In terms of brands, you have a choice of 4; Peroni (most likely) but also Aston Martin, Cognizant, and, for a bit of an outside bet, Formula 1.

Specifically, the webpage with all the job lots of crates of Peroni on offer.

The Blogfather has nothing against Beer Pronto personally, and the merits of receiving beer, and quickly, are well known to him, but this ad is so shockingly shite it is hard to know where to start.

But how about with the creative. It feels like it has been lifted straight out of a low-res PowerPoint. It’s horribly over-cluttered and you have essentially four brands vying for your attention, it’s not immediately obvious it is Peroni trying to talk to you.

Remembering this appears on mobile, arguably this ad’s biggest problem is legibility. It is actually for Peroni’s alcohol-free beer, ‘Libera’, but you wouldn’t necessarily be able to see that. Clearly, messaging that on the face of it combines driving very very fast and having an alcoholic beverage is not ideal.

But there is another element to this: do Aston Martin know (and also to a lesser extent Cognizant and Formula 1) that their brand equity is essentially being used to help flog Peroni on BeerPronto.co.uk?

Also, the intent of creating a premium feeling ad is utterly undermined by the jarring, ugly context the ad appears in, almost certain to be scrolled right past, and signals anything but premium. Probably it would have a negative effect on the brand equity for all brands involved, including The Guardian newspaper itself.

Does Peroni even know this creative is being used by Beer Pronto? It all feels a bit murky. Who knows what is agreed and in the small print of these sponsorship and partnership deals, but it would be surprising if Aston Martin’s brand custodians know and approve of this ad being out there?

Surely not much good can come from these kinds of ads. The team at Gasp was fortunate to recently attend the book launch of (recent Call to Action podcast guest) Steve Harrison’s updated Can’t Sell, Won’t Sell, and this ad can’t help but bring to mind some of the sections from the opening chapters.

Steve references a survey by Alix Partners in 2019, which concluded, “of the $60 billion spent on digital advertising in 2018, around $30 billion had either a negative return or its return was not even measured.”

Steve also quotes that perennial thorn in the side of digital, Bob Hoffman, who says, “you are more likely to complete Navy SEAL training than interact with a digital advertisement.”

But this ad is still not the best amazingly ‘bad’ digital ad. Number one goes to this rascal spotted on Instagram. 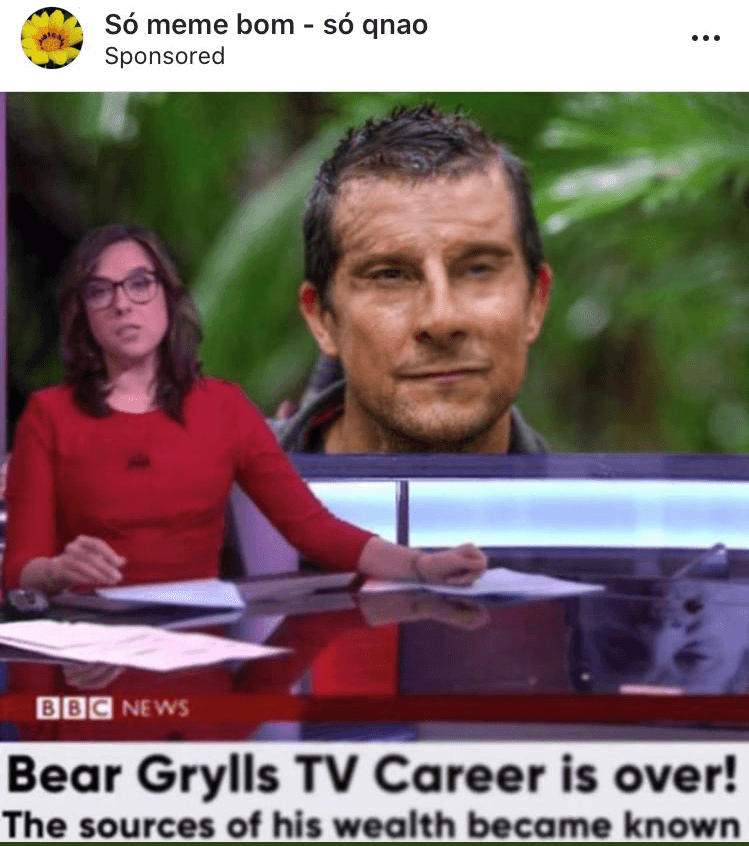 The first question that comes to mind is; what the Dickens is this ad trying to achieve? The second question, trying to elbow the first out of the way for prominence is; How the Dostoevsky did it get approved and run?

We don’t have much to go on, but the Instagram account it is from appears to be in Portuguese (The Blogfather is no bilingualist, however). The only explanation that comes to mind is:

Ray Mears, whilst in the Brazilian rainforest, partook of a hallucinatory shroom just for the craic, and in his paranoid, self-reflective come down, launched a reputational attack via social media ads against his largest wilderness expert rival, in the vain hope to get more TV time himself.

What else could it be?

But it was whilst having a nosey around the London Transport Museum recently that I saw something to serve as a reminder that all hope is not lost. Check out these 1990’s grab handles from the Tube. A very unique kind of product placement, it is just a shame that they are now consigned to be behind glass in a museum cabinet. 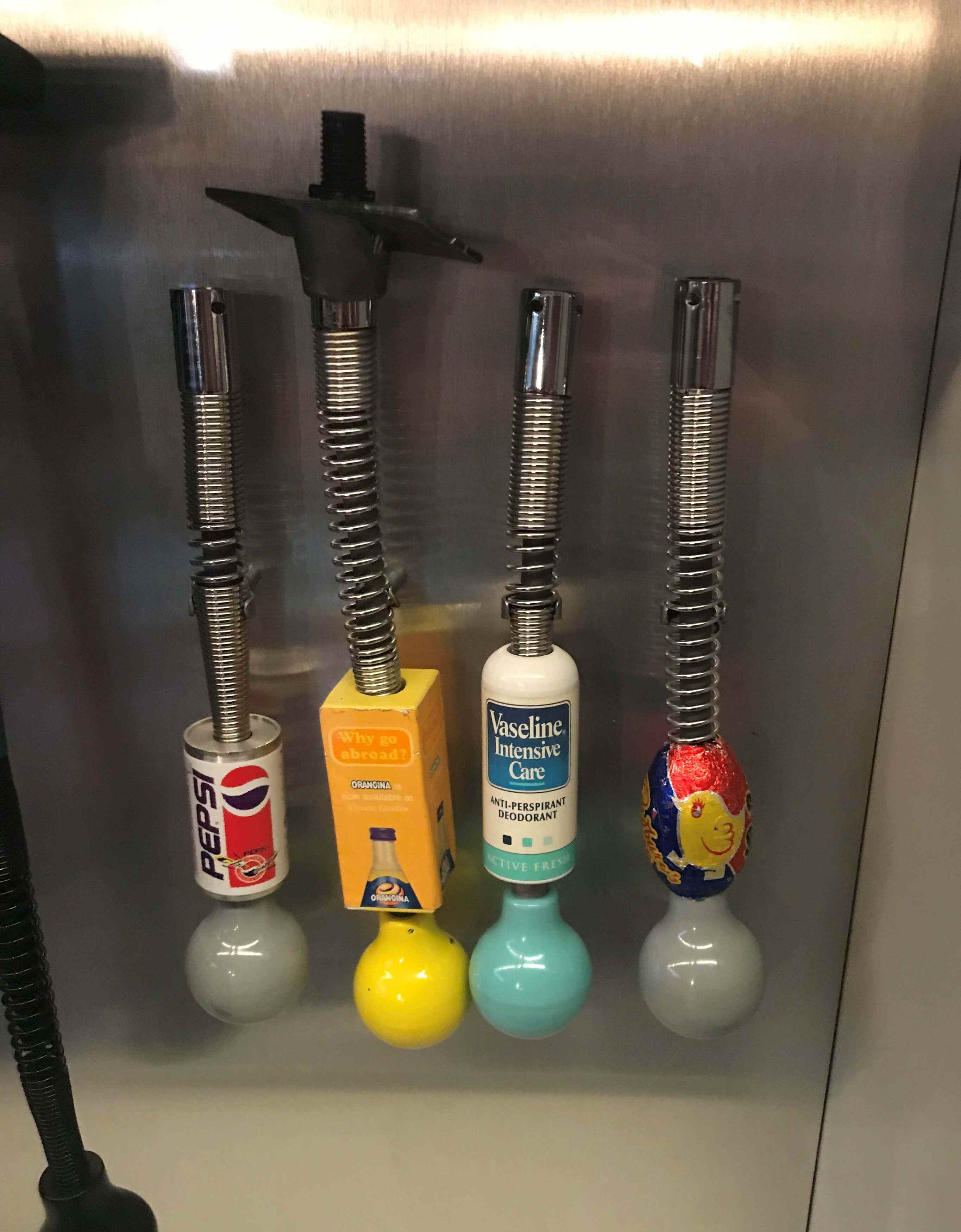 Amazing, creative, and imaginative use of space to place adverts, and a reminder that there is a lot more than just digital available to executing marketing and advertising.

Start with a good brief and a good proposition then allow your creativity time to soak it all up and go from there.

The Blogfather goes after Tottenham and England striker Harry Kane for a cringy Coca-Cola endorsement this week, before setting his sights on Amazon and their penchant for dodging tax.

The Blogfather emerges from the shadows to get stuck into Share of Search and the work and views of marketing’s best, including Les Binet and Mark Ritson, before telling tale of how he went full ahead both engines into Bitcoin, off the back of an advert he saw on the Tube.

The Blogfather returns from a stretch away to batter programmatic advertising.