The Blogfather goes after Tottenham and England striker Harry Kane for a cringy Coca-Cola endorsement this week, before setting his sights on Amazon and their penchant for dodging tax.

You don’t have to scroll and click too far before hitting something cringeworthy on the internet. Cue this tweet from Harry Kane of Tottenham Hotspur and England:

And celebrity endorsement does work if done well; you only have to see how Nespresso is synonymous with George Clooney for evidence of that.

Thankfully, Harry hashtagged it as an #Ad for us, less we all feel duped by this subtle, nuanced piece of philosophical musing.

This ‘Ad’ is a pretty pointless piece of endorsement content. Harry Kane’s posts usually get likes in the range of 25k-130k, sometimes more (something Coca-Cola obviously want to tap into). This tweet has 1.6k likes. It’s fair to say that it’s turned the audience off somewhat, with a casual look at the sentiment of the comments revealing a trail of cynicism.

Of course, likes are a pretty poor vanity metric, and should not be seen as the only evidence of ad/marketing success. And celebrity endorsement does work if done well; you only have to see how Nespresso is synonymous with George Clooney for evidence of that. Harry and Coca-Cola need to up their game a bit. If they end up hitting the heights of Nespresso and George Clooney’s recall and association, then the quality of the ads themselves becomes less important.

To be fair, the video ad itself is fairly innocuous, run-of-the-mill football tournament ad fare of over-excited football fans in a sunny setting. The issue is more the crow-barred framing of it with Harry Kane endorsing it, and the signalling that comes with that, which makes the skin crawl a bit.

The consumer really doesn’t expect nor care enough that a soft drink will get them close to the emotional ecstasy of scoring a goal. They’ll settle for not being mugged off for a bottle of pop at extortionate prices in the stadium (assuming they are let in), where they may or may not choose to buy one.

“For most brands, the biggest opportunity for growth comes from taking people from buying it zero times to buying it once in a typical purchase cycle. Starting with zero means you’ll start from the right place – a place which assumes most of your customers don’t often buy your brand, don’t think much or care about it and certainly don’t give a s**t about your advertising.” 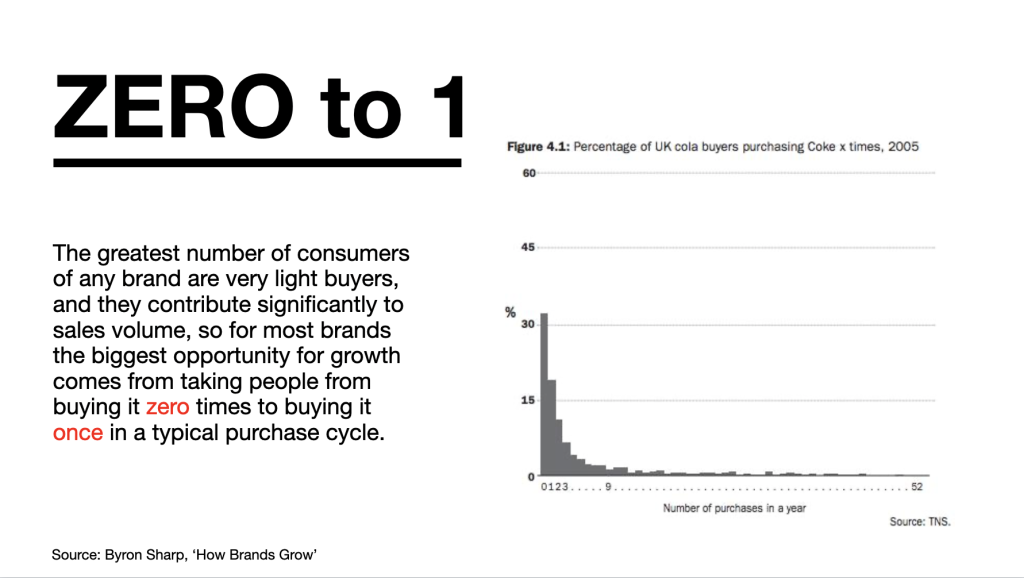 The Euros start soon, and no doubt heartache for England at some stage is about as inevitable as Amazon avoiding taxes.

(As an aside, maybe Coke Zero, devoid of any sugar and thus taste, was a kind of concept art piece; the embodiment of how hard it is to get people to go from zero to one purchase).

It’s fair to say that this advert falls into the 84% of advertising that doesn’t even get noticed or remembered, as per the studies done by the Ehrenberg-Bass Institute. The remaining 16% gets both recalled and correctly attributed because it is distinctive enough to make an impact.

Somewhat ironically, Harry Kane has in the past made a somewhat unintentional and sublime cameo in this unquestionably memorable and distinct advert by Licor Beirão, entitled; We’re sorry, Harry Kane (cheers to Parvez Sheik Fareed for sharing it).

Of course, Coca-Cola is a master brand, amassing years and years of brand equity and recall (everyone loves their ‘Holidays are coming’ ads, no?), you’d just be forgiven for expecting more imagination and creativity than this kind of lazy and painfully-forced marketing activation.

The Euros start soon, and no doubt heartache for England at some stage is about as inevitable as Amazon avoiding taxes.

Speaking of which, the glorified Cash and Carry merchants are at it again, this time off the back of what ostensibly looked like a globally important Robin Hood moment at the recent G7 summit, where a landmark deal was agreed that aims to make the biggest companies such as Apple pay more tax.

However, the ‘tech’ giant, whose Amazon Prime Air venture for drone deliveries is making about the same amount of short haul flights as Ryanair currently, are likely to still pay very little tax due to a loophole whereby only those companies making more than 10% profit will be heavily taxed (Amazon’s bottom line comes out at about 6%, if you believe their books).

Amazon’s façade of tech (of which their PR admittedly does a great job of creating), reminds me of the wizards and dragon-filled world of Discworld and the work of the late, great Terry Pratchett. Anyone familiar with Pratchett’s work knows that the invention of the camera (called an iconograph in Discworld) came along and was seen as this amazing, magical object. But when you open it up there is in fact a very little imp, frantically painting the ‘photo’ on an easel before pushing out the finished canvas like a polaroid camera. Genius, and also akin to Amazon throwing a shit tonne of manual labour at their warehouse operation.

Anyway, that’s my annual Amazon-bashing off my chest. Feel better now. ‘Til next time.

The Blogfather refrains from joining in on the Dulux bashing, coming to their defence in the name of marketing effectiveness, whilst also wishing an alternative to Eric Dier could come to the Spurs defence.

The Blogfather emerges from the shadows to get stuck into Share of Search and the work and views of marketing’s best, including Les Binet and Mark Ritson, before telling tale of how he went full ahead both engines into Bitcoin, off the back of an advert he saw on the Tube.