Are we punch-drunk with the promise of online fame and riches?

‘Influencer’ is a self-important piece of jargon meaning product placement for the masses, in a nut shell

Monetize the children! Set them to work, you can never start them grafting too young.

No, not an extract from Fagin’s diary. This is Instagram 2019, and the murky world of ‘influencers’.

I recently read an article on these charlatans, from BuzzFeed wannabe clickbait merchants the BBC, which seemed to be intrinsically linked to the heaviness of my heart the more I scrolled down.

It is about a 2-year-old ‘influencer’ called Ralphie Waplington. The page was set up by his parents, so the story is not that he is a two-year-old tech and social media genius.

‘Influencer’ is a self-important piece of jargon meaning product placement for the masses, in a nutshell. Always a somewhat blunt instrument in advertising’s arsenal, what was once solely the realm of the likes of James Bond, flashing a Rolex watch whilst entering an Aston Martin, you now have the likes of Ralphie Waplington’s Dad sitting in a hatchback, applying Bite Away insect repellent to his long shanks (maybe it was writing plotlines like this that got Danny Boyle sacked from the latest Bond movie, but we digress).

Let’s leave the social commentary to Dickens, but is there any true marketing value in influencer marketing?

If they have a genuine, and large following, and it makes sense as part of a larger marketing strategy, then yes. You only have to look at the success of a You Tuber like Ryan ToysReview (a seven-year-old who reviews toys) who made $22m last year, and whose videos get literally billions of views, to realise that he is capable of help shifting a tonne of Disney merchandise.

A past podcast guest of ours, Amy Kean, also spoke very positivity on how influencers triggered an uplift in sales of her book, The Little Girl Who Gave Zero Fucks (which, if you haven't already, you must buy at scale, enjoy and share). Clearly there can be a place for them, in the mix.

But the value of what are now called ‘micro’ or ‘nano’ influencers’ is often negligible.

Looking more closely at the insect repellent post, for example. It has 154 likes, which for an account of 20k followers, is quite poor. It also has 10 comments. Which are all from Ralphie’s Mum, running the account, or from ‘hueyandhattie’ and ‘hayleyandmax’, who are, unsurprisingly, other toddler influencer wannabes. They seem to work in packs, to boost one another’s engagement.

Putting the Ralphie Waplington accounts into a fake follower service online gives interesting results. The most striking part isn’t the proportion of fake followers (which isn’t as high as we’d expect in truth) but the fact is that only 0.8% of followers have ever liked or commented or “engaged”. So, if we do the maths, starting with 20,000, minus fake followers, gives us 16,000. Of which only 0.8% have engaged. So that’s 128 people. And therein lies the answer to the question of influencer value, surely?

Influencers are certainly a big market; The World Advertising Research Centre (WARC) predicts global influencer marketing spend to grow to $5-$10billion by 2020*, but there’s certainly more than a whiff of bullshit about it.

There’s probably no better example of this than the one Wiemer Snijders shared with us on our podcast (listen from approx 46mins in, specifically).

A scientific, peer review paper ran a story demonstrating that nano influencers can realise a 30% uplift in sales. You seriously expect us to go to the likes of Heineken with this? That can only come from a tiny number, to produce a huge uplift. It turns out it was based on sales on a plane, a single plane, and the nano influencer on board has helped raise sales of whisky from the usual 2 bottles, to 3. Great. Now try that at scale.

There is a broader lesson here, something Wiemer learnt from corresponding with Byron Sharp, to always ask; can I really tell that from the data? Always interrogate the claims.

But back to influencers.

There is a now ‘Selfie Factory’ in West London, somewhat dismayingly, where would-be influencers can go to take selfies against randomly wacky backgrounds (although, if successful, Instagram will presumably end up with photos that all look the same).

The ‘Lifestyle’ influencer Tiffany Mitchell received a load of negative press recently for selling her soul when publishing Instagram Story images of her motorbike ‘accident’, and trying to flog some of Coca Cola’s Smartwater and name dropping her tattoo artist, whilst laying prone by the roadside.

Speaking of fakery, influencer marketing has its problems with fake followers; a form of ad fraud, in essence. Clueless brands send money to Instagram accounts with large followings, completely unaware that the following is largely fake. It is such a significant problem that the same WARC article referred to above also gave 8 tips to spot fake Instagram followers.

The Gasp view on influencers is closely aligned to the great Bob Hoffman, who recently shared the brilliant story of an ice cream van owner who was so fed up of influencers promising social exposure in exchange for free treats that he put up this sign: 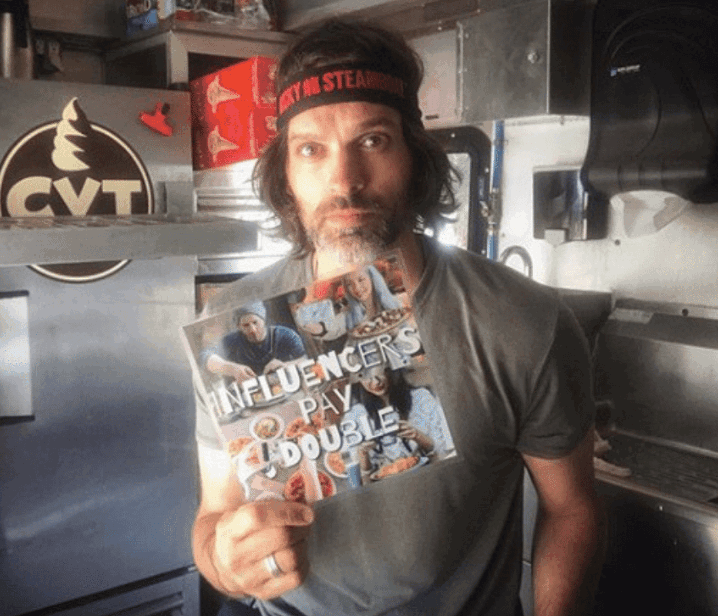 But of course, it’s not all doom and gloom, and there are some genuine, good people on Instagram, such as our most recent podcast guest, the quite unique Tricia Wang.

She goes and gorges herself on BBQ just because she likes it, not because someone’s dropped her a few quid to do it. Her Instagram Stories are randomly, brilliantly, nuts, so you’d do well to guess that she is one of the world’s best Researchers and Ethnographers (she’s actually rebranded the term ‘Researcher’ as it is so boring).

You should follow her, and listen to her chat with us on our podcast, on a whole range of interesting nuggets. So go!