You don't mess with an Englishman's sandwich. Nor should you fiddle the accounts

I assumed the Taste The Difference range had been included in the meal deal by mistake; a work experience dude had got trigger happy with the meal deal sticker gun

Anger. Up in arms. Outrage. Yep, it's another social media storm from the volatile crucible that is the internet. This time it was Sainsbury's turn to feel the force of a public backlash. What have they done to rankle their customers into such an outpouring of hyperbolic vitriol?

They've pulled the fancy sandwiches from the £3.00 meal deal.

It may seem a little silly, but Sainsbury's have managed to get themselves into a bit of a mess on this. They probably shouldn't have stuck the Taste the Difference sarnies into the meal deal to begin with. When I last popped into Sainsbury's, I assumed the Taste The Difference range had been included in the meal deal by mistake; a work experience dude had got trigger happy with the meal deal sticker gun. The range is arguably a bit cheapened by seeing a Brie and grape on batch bread beauty slumming it on a shelf with a limp tuna and cucumber number. It's almost like they mixed their Basics and Taste The Difference ranges, so their sub-brand identities have become a little muddled, losing clarity.

So they made a rod for their own back, and when they looked to change it, the people weren't happy, perceiving the brand as mugging them off. Hence the nut cases like this hitting social media: 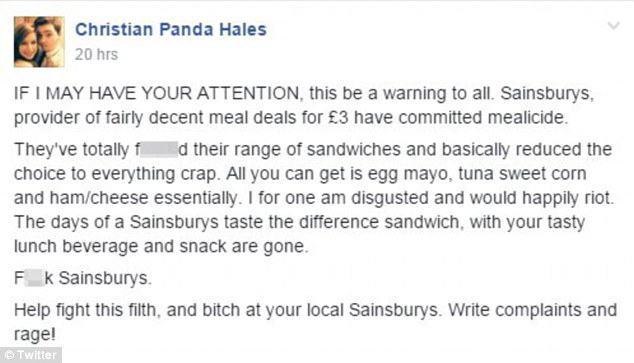 Curiously enough people seem to be more pissed off if you cease to sell Ribena than if your directors commit multi-million pound fraud.

This is another example of how a social media pounding can grow out of something that is seemingly harmless. They didn't really help themselves in the nature of their official response either, when they started using phrases like“ambient snacking lines” to talk about the likes of cocktail sausages and pork pies. They have clearly lost the communication plot a little. It's likely to cost them a bit of the meal deal market, so it's not clear exactly what they were trying to achieve.

Yet the most interesting thing about this latest example is how it has become apparent that a social media storm has become actual content itself. On the one hand you have people crafting pithy, witty tweets in the hope they get cut and pasted into online articles, whilst on the other you have the media lapping it up and using them to produce quick-to-assemble articles like this one from the BBC. The upshot is that it's certainly got Sainsbury's in the news, and it won't all be negative; “there is only one thing in life worse than being talked about, and that is not being talked about,” to quote Wilde.

Sainsbury's can be forgiven for not being able to foresee a furore, but the same cannot be said for the top-brass, cheeky, corrupt monkeys over at Tesco. Three of their old c-level scamps have been charged with fraud and face trial this month, in relation to the artificial inflating of profits by a mere £326m. This has been casting a shadow over Tesco for two years now, and could jeopardise the brand recovery effort that has seen them post back-to-back quarters of growth (assuming these new results themselves haven't also been artificially inflated by a chicken nugget being sold for a billion pounds or something). Tesco have also been on the wrong end of social media's scorn in recent months, primarily for pulling some major brands from their stock line. Curiously enough people seem to be more pissed off if you cease to sell Ribena than if your directors commit multi-million pound fraud. Odd human race!

Another headline that stood out this week was: “Lidl’s UK boss Ronny Gottschlich suddenly departs.” I had visions of Ronny clearing his desk and making for the hills with the company laptop under his arm whilst still owing a fiver to petty cash. Gottschlich helped to elevate the Lidl brand in the UK and introduced more premium products to attract consumers, doing the kind of job that Sainsbury's and Tesco would kill for at the moment, so it will be interesting to observe Lidl's output from here.

Sainsbury's and Tesco were the top dogs for so long that you wonder if they just got complacent. And with the likes of Lidl and Aldi chomping into their market share, they have to up their game a bit to become more in tune with their customers.