The Blogfather refrains from joining in on the Dulux bashing, coming to their defence in the name of marketing effectiveness, whilst also wishing an alternative to Eric Dier could come to the Spurs defence.

A social media shit storm can be forecast to come along with reasonable frequency these days. In most cases they induce cringes of inexplicability at how those responsible could be so stupid, and rightly so.

At first glance, the mini squall around Dulux’s social media output in promotion of their new sponsorship deal with Tottenham Hotspur appears the same. The general view was that Dulux had got this horribly wrong, with the likes of Campaign writing that:

“Yesterday’s unveiling of Dulux as the first official paint supplier to Tottenham Hotspur FC degenerated into farce after the brand’s Twitter account started ridiculing the team.”

What did Dulux tweet exactly? Dulux joined in on some banter as regards Spurs’ long wait for a trophy of any description and their current lack of a decent centre-half pairing. 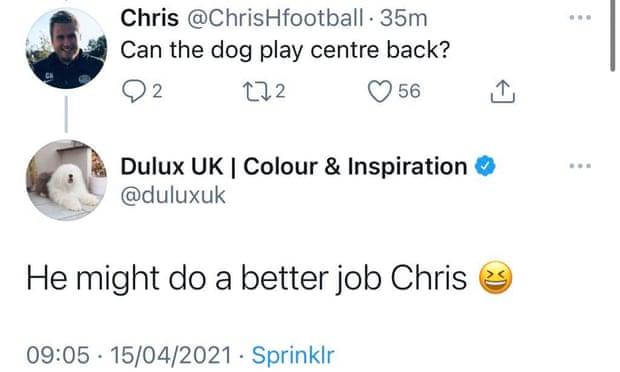 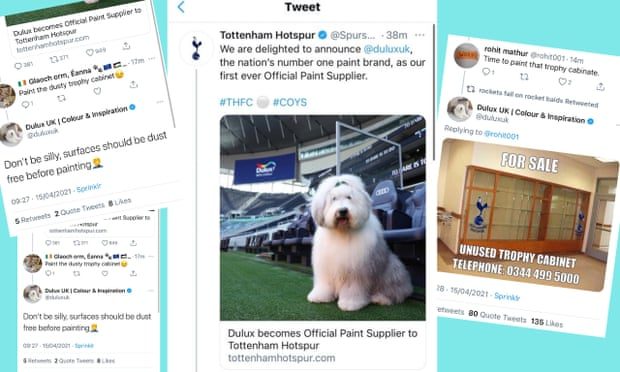 Yes, these tweets raised eyebrows and were surprising, but they are funny and true. The reason they were surprising is because the usual social media output for such sponsorship deals is devoid of any genuine truth and fun

The Blogfather (and Gasp Founder Giles too) speak from a position of being long time Spurs fans. Yes, these tweets raised eyebrows and were surprising, but they are funny and true. The reason they were surprising is because the usual social media output for such sponsorship deals is devoid of any genuine truth and fun; exercises in cloying kiss-arse comms.

So, what else could they have put out? Well, Nuno Pena, the AkzoNobel (Dulux’s owners) marketing director for UK & Ireland, said of the partnership: “Together, we are joined by a shared passion for colour. Spurs fans will know only too well the powerful impact putting on their white and blue scarves and shirts has on a matchday, and as a business we’re committed to using colour to transform lives.”

Spurs fans and Dulux really aren’t joined by a shared passion for colour. For a brief while we were joined in a knowing, self-deprecating lament for our team’s travails. The Dulux dog probably is about as mobile as Eric Dier, whilst having the same capability for accurate distribution from the back.

Arguably, Dulux’s biggest mistake was deleting the tweets and offering the grovelling apology. If there is a sure-fire way to ensure a tweet gets shared more it is, somewhat paradoxically, to delete it. Screen grabs of deleted tweets always go viral and end up in newspaper articles.

We have to remember the end goal here. What’s the point of sponsorship? To create brand awareness and recall. From a purely marketing effectiveness viewpoint, these tweets must have achieved ten-fold of the awareness and media coverage compared to just putting out ‘normal’ comms. How many people know that Liverpool’s official coffee partner is Lavazza? I’d wager a lot of the UK now know Dulux have a sponsorship deal with Spurs.

The poor person who was behind these tweets probably received their P45 when they should have been getting a bonus.

Colin Lewis recently wrote about something similar; the furore over Volkswagen’s April Fool’s stunt when they changed their name to ‘Voltswagen’.

It hoodwinked loads of media outlets, with most commenting it was a ‘botched stunt’, yet Colin makes the astute point that is shows marketing effectiveness in action, making the brand more famous for electric vehicles, which is exactly what they wanted.

Give the whole blog a read, but in referring to the work of Binet and Field, Colin says:

“Field tells us that the IPA’s data suggests ‘fame’ is the single most effective strategy: “Fame is not simply about generating brand awareness (which turns out to have limited value for most established brands). It is about building word-of-mouth advocacy for the brand – getting it talked about, creating authority for the brand and the sense that it is making most of the running in the category. Fame works – and it makes hard-pressed communications budgets stretch further by getting consumers to do some of the work.””

The Blogfather bowls into Fortnum & Mason to send chutneys flying as he blows open what is truly essential, with influencers getting both barrels, just for a change, but marketing strategists getting his blessing.

The Blogfather returns from a ‘business’ trip on the Costa del Sol with a fresh view on effectiveness in marketing, and a job lot of Marlboro Lights, if you’re interested?