What does it take to create a great advert?

...some Shoreditch hipster spiv is banging on about opening pop up Bloody Mary bars...

So England’s turned into the Costa del Sol.

Global warming may change the nature of our future summers (if you believe the fear mongers), but some things will never change.

One of the biggest myths peddled in marketing and advertising is that everything is changing, and the old ways are dead. Yet even now, the following quote from one of the founding fathers of advertising, Bill Bernbach, is as true as ever:

“It took millions of years for man’s instincts to develop. It will take millions more for them to even vary. It is fashionable to talk about changing man. A communicator must be concerned with unchanging man, with his obsessive drive to survive, to be admired, to succeed, to love, to take care of his own.”

Going almost hand-in-hand with the fad-chasing and past-bashing is short terminism and talk of ‘agility’. Everyone is agile now. What do they mean? They’re trying to convince you they can move fast and get results quick, but the reality is invariably switching budget spend quickly to the latest bright new thing, without any real thought or strategy (we’ve recently blogged on the importance of Strategy and Tactics).

By way of a timely aside: as I write, I’m watching Channel Four’s Sunday Brunch, where some Shoreditch hipster spiv is banging on about opening pop up Bloody Mary bars, as they are ‘re-inventing the Bloody Mary’. Who concluded, diagnosed, that needed re-inventing? How many people are looking at each other thinking the Bloody Mary is past it? Standard Shoreditch Bollocks Bubble fayre.

Anyway, moving on. Insurance commercials. Never thought I would flag up one of these as a great, humourous example of advertising, but it was during a stint holed up in a safe house in the States a few years back, that I first saw what is now a long-established advertising campaign.

It was Mayhem for Allstate Insurance, from Leo Burnett Chicago. Have a butcher’s yourself.

"Can you point to a single brand which has really suffered because it has stuck with the same strategy and creative approach for too long? Because it changed tack too rarely? Because it retained an old endline?" – Rory Sutherland

Allstate is positioned as the hero, and Mayhem as the villain, played by Dean Winters, an occasional guest television actor, who portrays the personification of chaos as an insanely masochistic adult man in a suit and tie. He’s everything from a “Random Wind Storm” to “an emotionally-compromised teenage girl”.

With more than fifty unique spots, the ad ran consistently for nearly six years from 2010, and after a short hiatus in 2017, they announced a comeback with a timely New Year’s resolution campaign in January this year. And it’s just as good as the spots from the years before. So why does it keep working?

Dave Trott’s Impact – Communication – Persuasion breaks it down perfectly. An ad needs to get your attention before it can communicate the main message, and only after it’s accomplished those two things can it persuade you to take action.

According to a study by the Ehrenberg-Bass Institute (via Byron Sharp’s How Brands Grow), as little as 16% of all advertising is both remembered and correctly attributed. So that’s 84% of advertising spend you could argue is wasted. Most of it fails as it doesn’t have that initial impact.

So, that’s what makes this campaign work, but what makes it work for so long? I break it down to this basic concept; one, simple and flexible message that’s true to the brand, with a dash of dark comedy and ignoring short-terminism trends.

If you want people to remember your key message, you’re best delivering one message, not two. Analysis of the Link database (a tool used by the world’s leading advertisers) shows that the more messages you try and communicate, the less likelihood there is of any single message lodging in the brain of your audience. 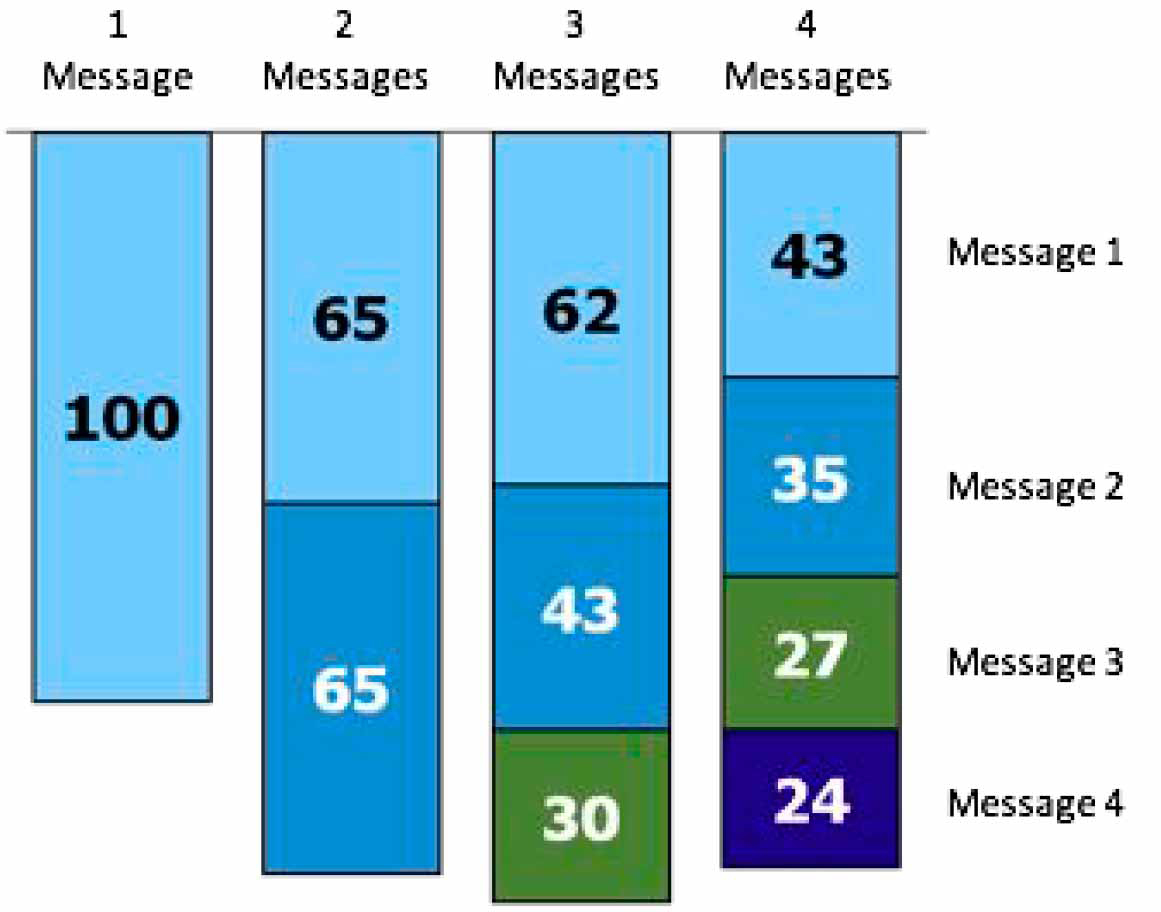 Any advert that is emotional is more memorable. The Mayhem ads make you laugh. The John Lewis ads make you (not me) well up. According to Binet & Field in ‘The Long and Short of It’, emotional campaigns are twice as likely to achieve top-box profit performance as rational campaigns, driving market share growth in the process. 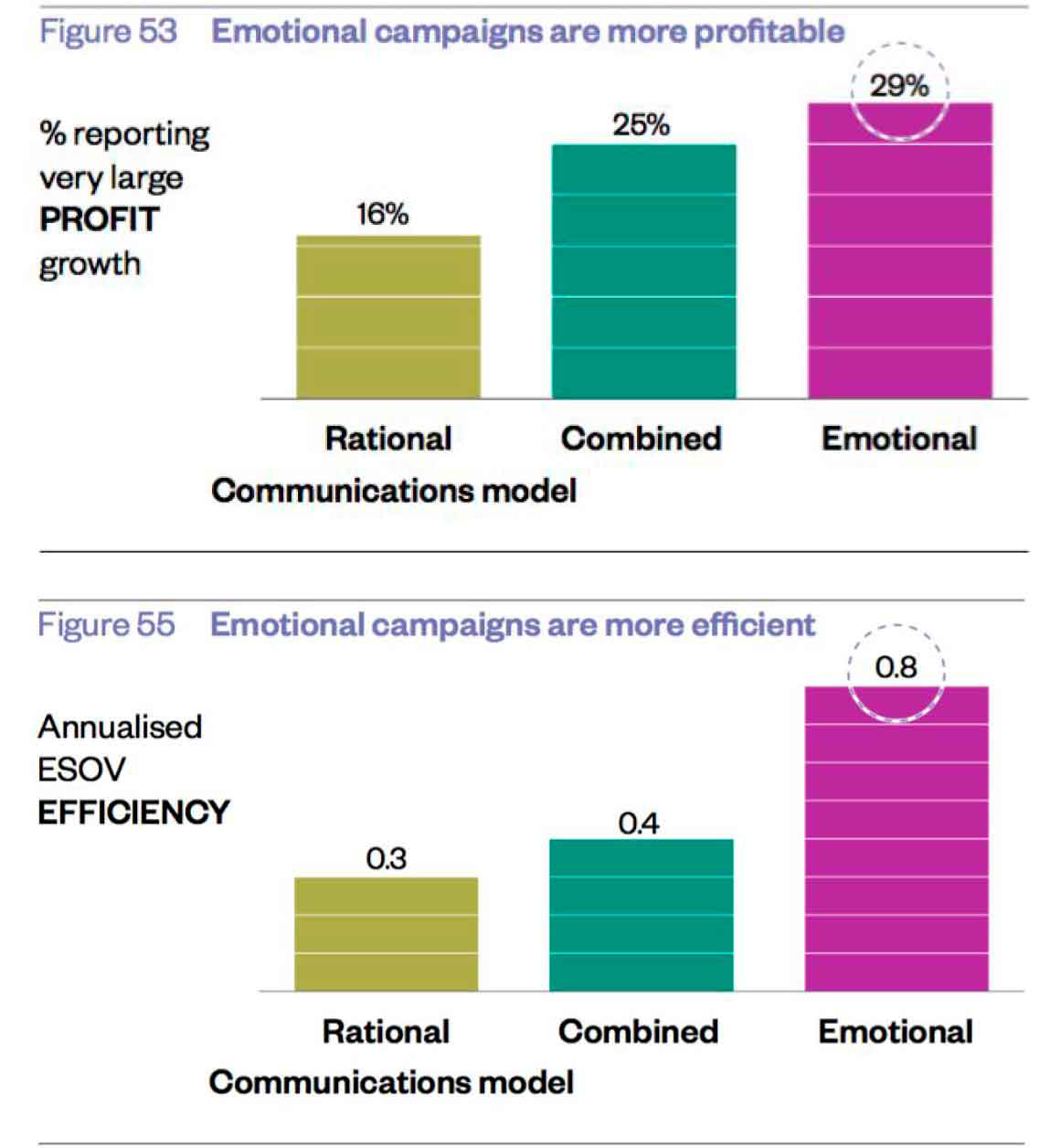 However, emotion alone may not be enough. You also need motivation. Phil Barden recently wrote a great trilogy of blogs on the oft misunderstood role of emotion in advertising. It is motivation that determines behaviour and choice. You’ve got to make people do something: ‘I’m going to buy that as it will make my life a bit easier/it will save me a few quid/my daughter would love it’.

It’s easier said than done, but create something that is distinct and unique. People are voluntarily watching the Mayhem adverts, searching them out on YouTube. It’s at this stage that tactics can come in. In this case, social media made sense, as Mayhem created a successful and verified Facebook page for the villainous star but it wasn't the starting point.

A blog we thoroughly recommend is from an agency that’s a bit of a similar soul to Gasp; Sell! Sell! Here’s a pertinent slice from their most recent bloggage:

“In the long run, a big advertising idea that might have taken longer to see the light of day will create significant economies of scale further down the line as clients do not have to keep paying for the process and output of constant reinvention of idea, message and execution."

This is something that’s backed up by the legend that is Rory Sutherland:

"Can you point to a single brand which has really suffered because it has stuck with the same strategy and creative approach for too long? Because it changed tack too rarely? Because it retained an old endline?" – Rory Sutherland

I’m sure you all have your own iconic adverts you can recall. For me, one is the R. White’s Lemonade adverts from the 80s. I still know all the words. And I think the last time I watched it was when I was 8, back in 1988...

(A further Sunday Brunch update-aside: A deluded band called Slaves just proclaimed they are re-inventing rock and roll. Having listened to some of their stuff, I assure you, that they very much fucking aren’t).

Anyway, probably time to step out into the rain, and cool down. I’ll leave you with this confession: I’m still a secret lemonade drinker. Furtive swigs from the fridge when no one else is looking. Nothing’s really changed.

The Blogfather considers the art of storytelling, bumps into Gio Compario in the Swansea Job Centre and educates us about Barrys.

The Blogfather continues his Behavioural Economics journey of discovery, with an exploration of the importance of context.