…the marketing world learnt the power of Storytelling. It’s as easy as 1), 2) and 3)

The Blogfather considers the art of storytelling, bumps into Gio Compario in the Swansea Job Centre and educates us about Barrys.

Remember that advert they put out that didn’t have the Go Compare opera singing man in? No, neither do I.

Are you sitting comfortably? Then The Blogfather will begin. With the Pessimist Plague destroying life as we know it, The Blogfather is ready to hand out his kiss of death.

If you’ve spent any time at all reading my previous rants you’ll know I’m a sucker for a Dave Trott sweet nothing. But, quite frankly, I’ve been making myself sick lately. So I think it’s about time I moved on.

As luck would have it, at Marketing Week Live, Mark Ritson certainly managed to grab my attention. Mark isn’t really into the sweet nothings, but his dirty talk definitely never fails to get me fired up;

"Innovation does not have to involve taking a gamble on costly, ‘disruptive’ projects. It is often more profitable to refine and reimagine already popular products."

If you’ve managed to find a way of marketing your product which works for you (kudos, you’re in the minority) it just makes sense not to completely scrap it and try something different. Just ask Go Compare. Remember that advert they put out that didn’t have the Go Compare opera singing man in? No, neither do I. But it happened. After making Wynne Evans sweat over the complete lack of Opera in the Brecon Beacons, they yanked Gio Compario straight out the Swansea job centre and instead revisited and reimagined their advertising campaign.

There are some giants in marketing who are absolute masters of reimagining existing ideas. Take a look at Coca Cola. For more than 60 years Coca Cola have hogged one of the prime advertising spots in London’s Piccadilly Circus. How boring, sticking with the same thing for 60 years! Wrong. They’ve found something that works for them and they’ve run with it, not only that, they’ve managed to develop something extraordinary which their competitors will struggle to compete with (Pepsi who?). Over the course of the past 60 years they’ve constantly revisited and reinvented their original idea, ensuring their marketing remains anything but ordinary.

“If we, in presenting Coca-Cola to our consumers, are content to do ordinary things, in an ordinary way, we must of necessity be content to become and remain, an ordinary product.”
- Delony Sledge, Coca-Cola’s Advertising Director

Another pro when it comes to reinventing old material is the movie industry. They’re constantly churning out sequels in an effort to cut back on the time and effort that creating new characters would cost them. The unquestionable king of this is Disney, they’ve got; the whole damn Marvel Multiverse, Toy Story 2&3 (and apparently 4, because why let that cash cowboy retire with any dignity?), Cars 2&3, Monsters University, Finding Dory, Moana 2: Is there anything The Rock won’t do? to name just a few.

If I asked you to tell me all the famous men you know called Barry, I’m willing to bet you’ll name Barry Evans before you come up with J.M.Barrie (if you even know who he is at all).

If I asked you to tell me all the famous men you know called Barry, I’m willing to bet you’ll name Barry Evans before you come up with J.M.Barrie. Which is completely bonkers seeing as Barry Evans was the EastEnders village idiot 14 years ago, whereas, Barrie created one of the best loved stories of all time - Peter Pan. So how is it that so few know who Barrie is? A solid piece of reimagining, trust and a little bit of Disney amnesia dust. Every decade brings about a new hum-drum imagining of Neverland and the boy who never grows up, but none create that lasting canon status like Disney’s Peter Pan.

Moving on to the main issue before I get side-tracked into ranting about the powerhouse that is Disney and their possessive, money-grabbing tendencies. Dave Trott (honestly, it’s laughable if you thought I’d moved on) breaks down the essential components needed to create a story into:

Within Disney’s Barrie’s Peter Pan is the key to the art of storytelling, dumbed down to a level where anyone* can apply it. If we sidestep the Freudian wet-dream of calling the girl you like ‘Mummy’, and instead focus on Wendy you’ll realise that she is a manipulative, storytelling wizard. She uses Trott’s 1), 2) and 3) to perfection. 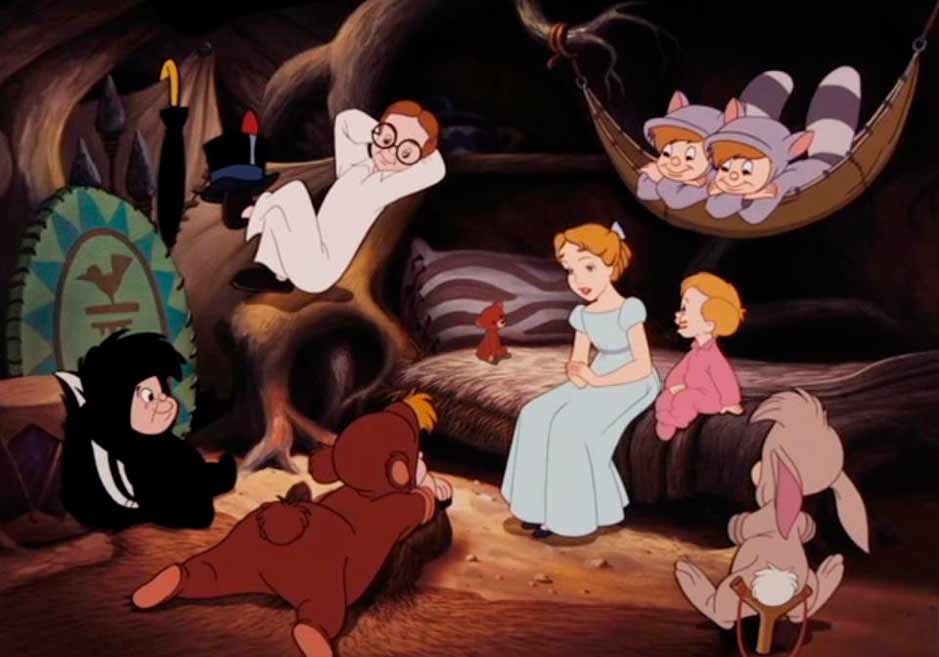 (Wendy) is a manipulative, storytelling wizard

1) Hook (pun not intended).
Wendy orientates her stories around her audience (the Lost Boys). She creates a basis for a story-world where her audience can actually envisage themselves.
2) Build.
AKA the fun bit. Wendy weaves in action and excitement all about the Lost Boy’s thrilling adventures with Captain Hook, making the Lost Boys itch to hear more while still keeping it believable.
3) Payoff.
Here’s the clever part, so pay attention. She finishes her story by really bringing home what it is the audience are missing and encouraging them to buy into her product - a mother – without ever explicitly telling them that’s what they need.

If a dummies guide to storytelling wasn’t enough, there is something else which we need to thank/slap J.M.Barrie for. ‘To die will be an awfully big adventure,’ is one of those popular pseudo-meaningful tattoos that kids on their gap year get to feel edgy and express their life-altering experience of spending two weeks getting drunk on an idyllic beach in Thailand. They have absolutely no idea who said it or why, but it just seems cool. Well, it was Peter Pan in Barrie’s version (I’ll forgive Disney this alteration seeing as Peter Pan was released post WW2), but it seems increasingly relevant in the overly dramatic culture I seem to find myself in. Mark Ritson nailed it recently, at Marketing Week Live, when he called out everyone who claims that ‘ is dead.’

If someone is there shouting about how it’s dead, odds are it’s not. If we believed everything we heard TV, cinema, radio and countless others would all have dropped down dead thanks to the Pessimist Plague. All these things are not dead and never will be, we’re just as f**ked as we were before. If anything, I’m ready for marketing to die a death. Briefly. *Clap* I do believe in marketing! If Tinkerbell gets to come back to life and be reincarnated into a slightly less bitchy state then why can’t marketing be brought back to life with a focus on the tried and tested formula of Strategy first, Tactics second (AI rarely, and Google Glass never?!). In the absence of that ever happening, just give Gasp a ring and we’ll Hook (pun was definitely intended that time) you up.

If you really want to dive down Alice’s rabbit hole into the Disney marketing Wonderland you’re in for a hell of a journey, but for now you need to Let It Go and do that on your own time. It’s high time for a bottle of rum that will carry me straight on till morning.

*That may be a too bold statement, I’ve worked with some codfish.

The Blogfather starts as he means to go on, with his first blog of 2018 taking a 2-by-4 to pretty much anything that moves (Except Poundland. He likes them).

Whilst at my first Gasp lunch, Giles (Creative Director), George (Designer) and I got talking about pool, and lamented how there are fewer and fewer decent pubs to play in. I think this is a huge social issue and if we don’t act now we will never be able to reverse the process, but it seems that the gorgeous couple in the latest Wilkinson Sword advert have found somewhere to play.