The lockdown of the UK in response to the Coronavirus pandemic in March 2020 had various seismic effects on society, not least enforcing a lot of people into social isolation.

A growing number of people would be affected as the pandemic removed social aspects of our communities, our habits, and a heightened state of anxiety would further affect everybody’s lives, both directly and indirectly.

What happened next was subsequently described by the charity Samaritans as “the biggest mental health crisis ever experienced”, and news media soon identified and reported a “mental health ticking time bomb”.

It became vital to ensure people knew that, despite often being on their own in isolation, they were not truly alone.

Around the globe, events were being cancelled, leaving a lot of very talented people all dressed up with nowhere to talk, and numerous attendees with nowhere to attend, listen, learn and (crucially) connect.

Advertising is about sharing ideas that inspire people to help others and think differently. There was an opportunity to give these talented voices a platform to be heard and to keep sharing ideas, yet also there was a wider, greater need to support individuals in the industry and beyond by helping to maintain good mental health.

ISOLATED Talks® effectively took these two ideas and began creating a non-physical place for a community of togetherness, forged by connecting thousands of people in isolation, inspiring them to keep sharing ideas and supporting mental health and wellbeing.

With an affectionate, effective and simple brand identity nod to TED Talks, ISOLATED Talks® was positioned as TED Talks but recorded from isolation. The platform launched and became the central hub for the project, allowing adland’s finest to donate video talks for the industry to enjoy. Viewers could choose to donate to Samaritans, our very first charity partner on this project, and were regularly nudged to check in with friends and family.

In fact, to date, 150 talks from key names within the industry (and overlapping) have been donated and enjoyed, including the likes of Dave Trott, Jane Evans, Rory Sutherland, Vikki Ross, Rob Schwartz and Nicole Yershon. Topics on creativity, advertising, copywriting, not to mention music, mental health, wellness, and even monster zoos (from a former BBC QI Head Elf).

And from this ISOLATED Talks® grew. And grew. Within 6 months the site’s content was being used in all manner of ways, connecting people in a way we could not have anticipated, and worked its way into education establishments and university syllabuses across the UK and beyond.

❤️ “One of those ideas I wish I’d had myself” – Dave Birss, Creative Legend

❤️ “Thank you for envisioning and architecting such a meaningful platform” – Harjot Singh, Global CSO, McCann 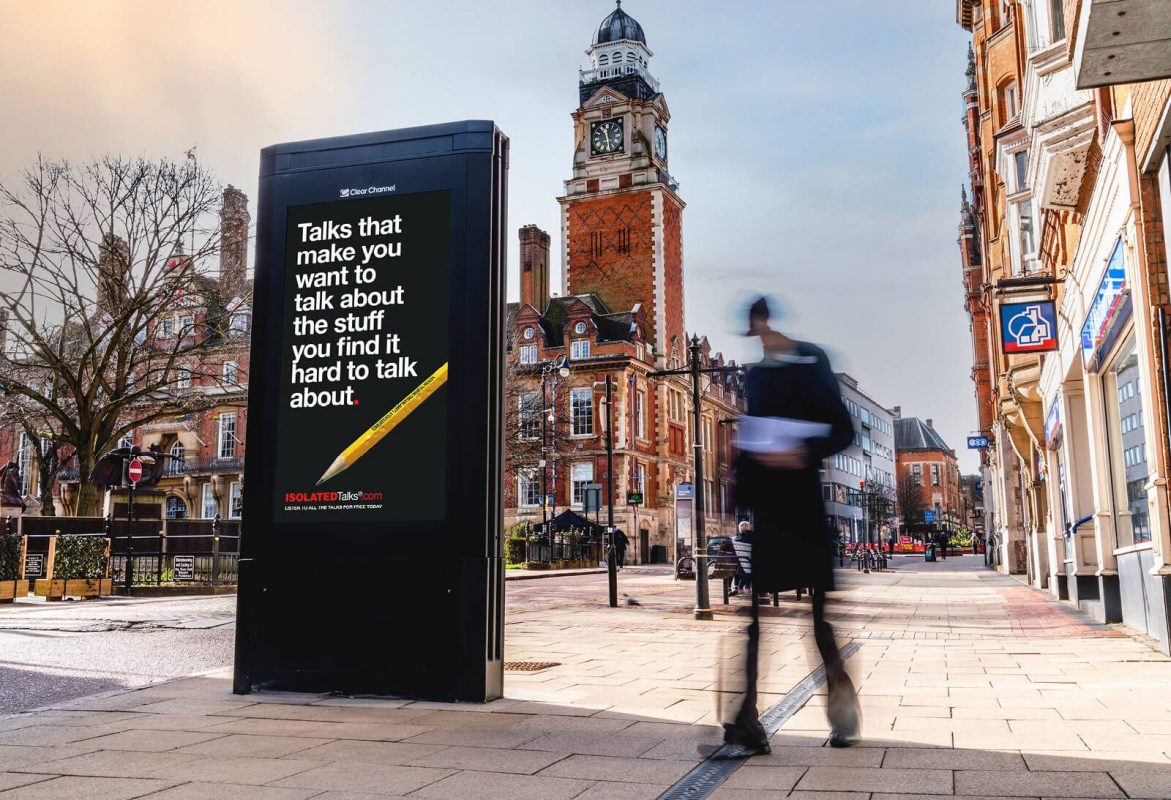 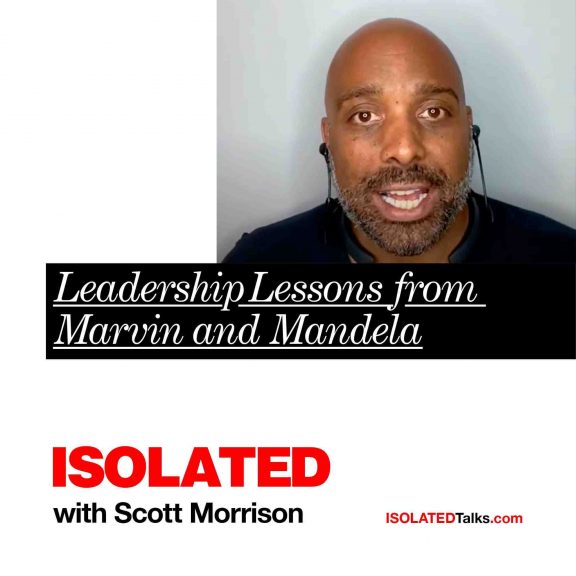 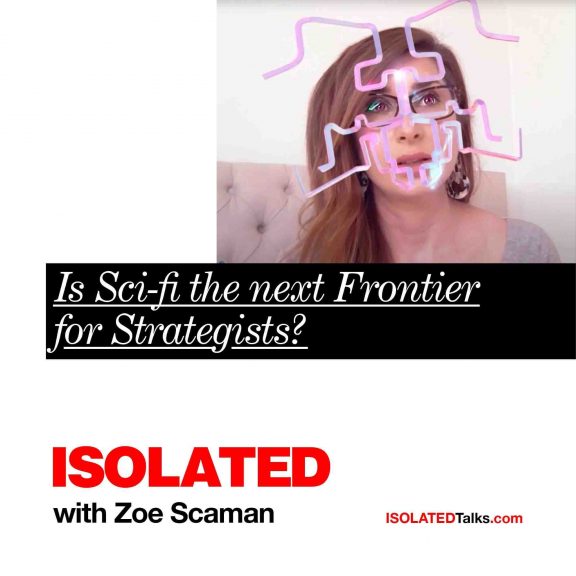 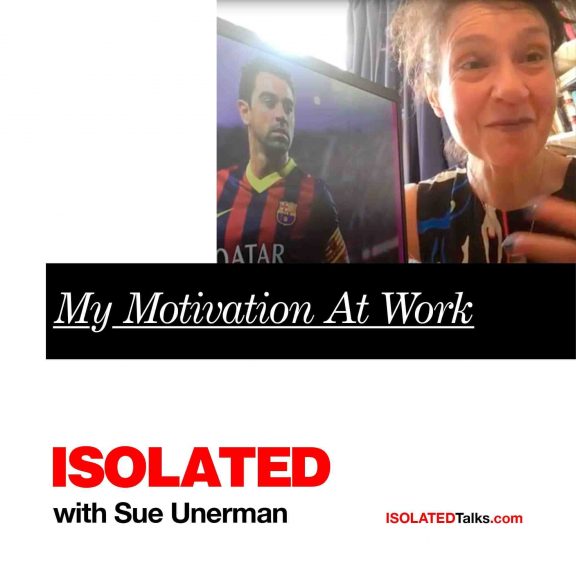 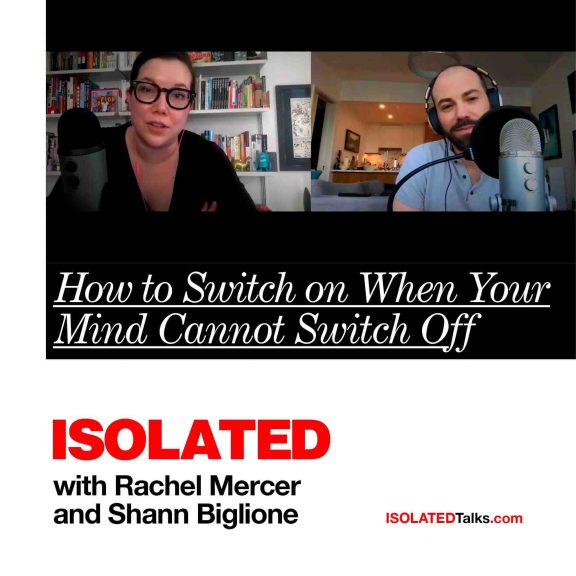 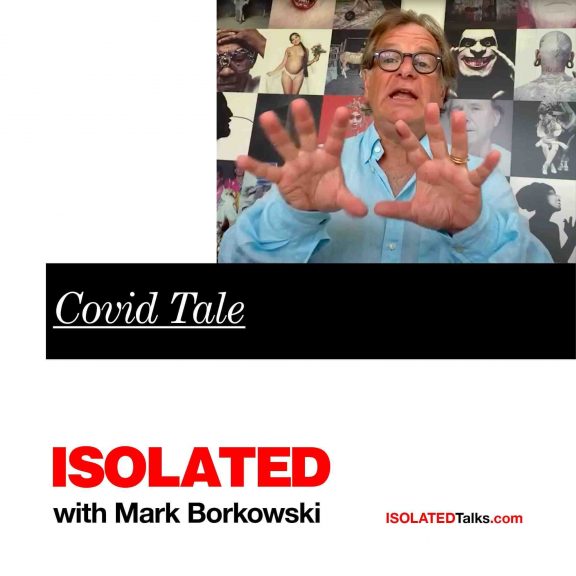 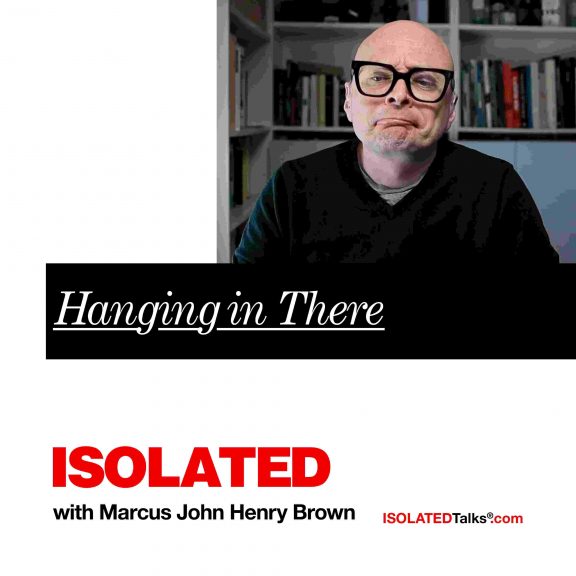 Establishing a network of amazing partners has become a critical part of the ISOLATED Talks® evolution, using numerous media to reach, connect and collaborate at a significant scale.

Partnering with Clear Channel, one of the UK’s largest Out of Home advertisers delivered approx. £300k’s worth of advertising across approx. 2000 sites nationwide; a great vindication of the true value of such a project.

True to the purpose of our initiative, we partnered with the Creative Advertising students at the University of Lincoln, giving them a great opportunity to show their talent, at a time where students are facing a dearth of industry opportunity.

Not resting on our laurels, we wanted to bring these talks to more and more people. Also, partnering with Startle Music, who use behavioural science to improve people's moods through music (amongst other great things), meant we had the power of music at our fingertips to really make a difference. This led to us launching ISOLATED Talks® Radio together; a unique, happy mix of listening to music and great ideas.

Our talks are accompanied by tunes specially curated using scientific data built on the psychological responses to music to help improve mental health. The station has already attracted several special live-broadcast feature shows, including #Sunday7Social, a growing social community playlist built on the belief that there is power in the communal listening to the same music at the same time as others. The popular Salmon Theory has made the station home, with the ‘A Slice of Salmon Theory’ show providing a bite-sized dose of philosophy.

The incredibly talented gem Higgins donated one of the highlights of the whole project with a beautiful gif garnished piece of advice to all... 👇 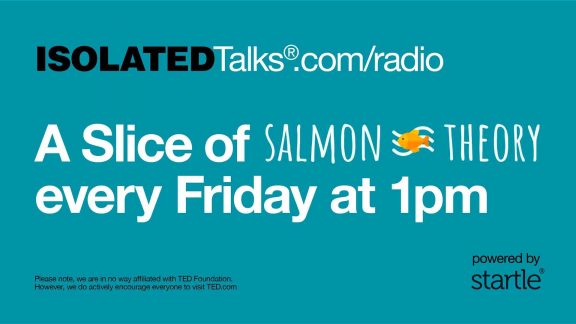 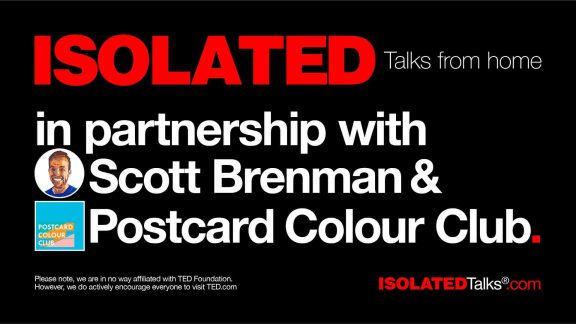 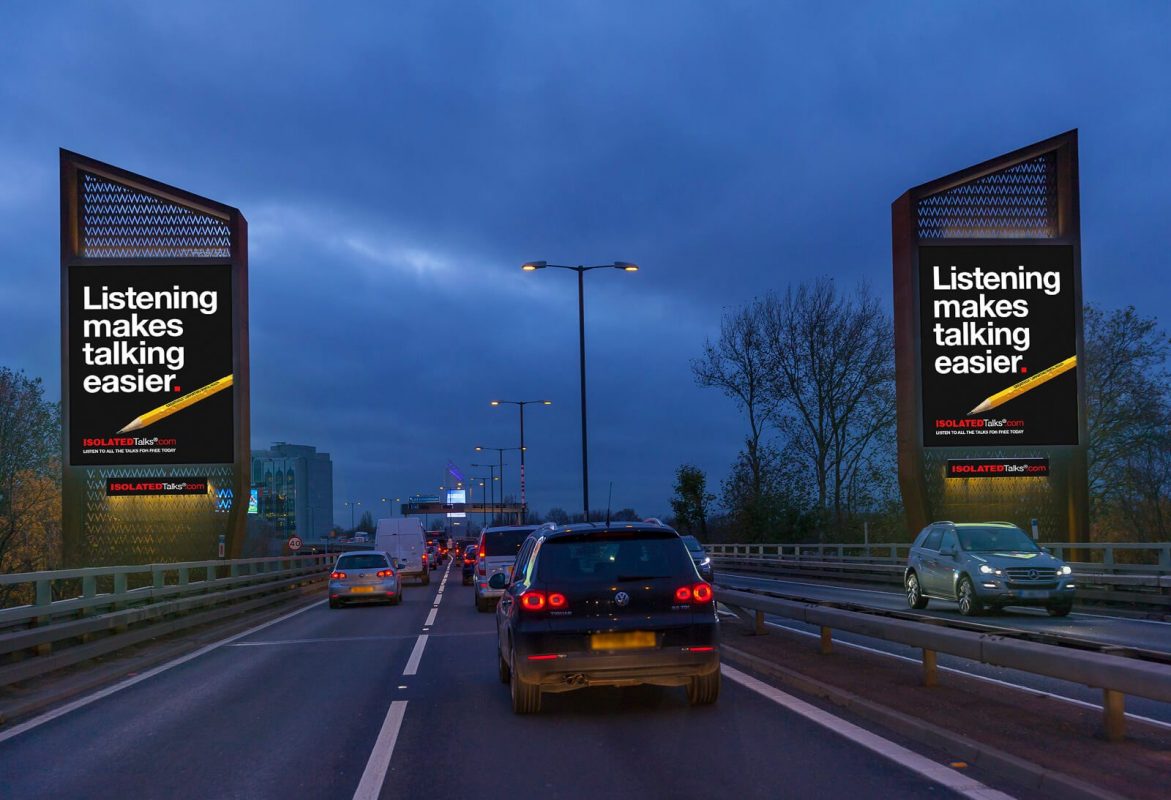 It is not an overstatement to say that ISOLATED Talks® has helped to save lives, both indirectly, via the thousands of pounds donated to Samaritans, yet also directly, as numerous people have stated that they would not have got through lockdown without it. The credit for this goes to those who have participated, donated, shared, commented, and crucially discussed and further destigmatised mental health.

The website had over 10,000 hits per day in it's opening week, and the talks have over 1 year’s worth of video views so far, and continues to prompt real connections with people from all over the world, with well over 80 countries making up repeat website traffic.

The free radio station continues to chart across radio directories and attract new special features. The vast network of diverse partners ranges from the simple yet wonderful concept from The Postcard Colour Club (colouring in and sending postcards to bring calm, colour, connection & improved mental health to people’s lives), to AD-Cademy, who plan to use ISOLATED Talks® as part of their course material and are in discussions on further ways of partnering.

In the very near future, ISOLATED Talks® will be hosting a mental health event with Samaritans and Clear Channel plus special key names who have supported the initiative, to deliver stronger, vaster connections to those suffering in isolation.

The establishing of an ISOLATED Talks® radio station and a U.K wide billboard campaign was something that could have only been dreamed of at the start. ISOLATED Talks® recently had its 1-year anniversary since launch, but the truth is that this is just the beginning. Feelings of isolation affect all of us, were around long before the pandemic and will outlive it.

And so, our purpose to destigmatise, normalise and creatively support mental health must also continue, as we reach out to corporate sponsors to help us by giving their expertise, budgets, people and genuine belief in the work we’re doing, to build the next chapters. 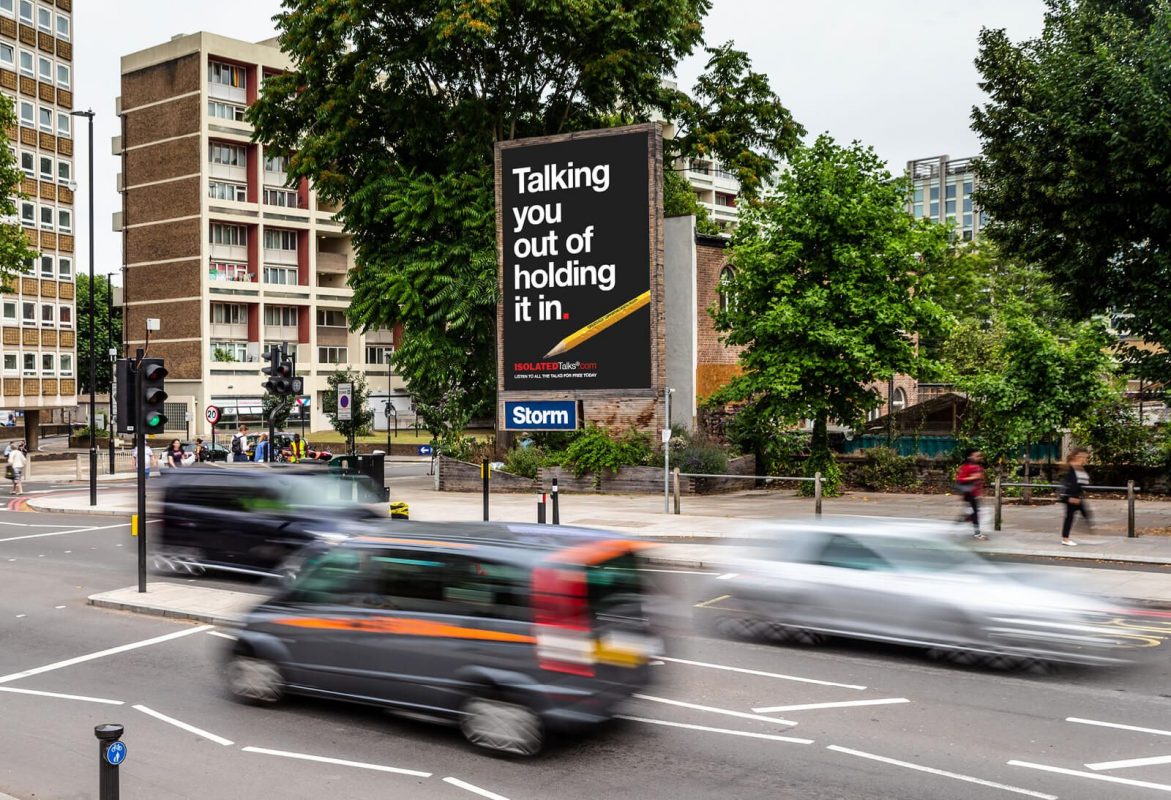 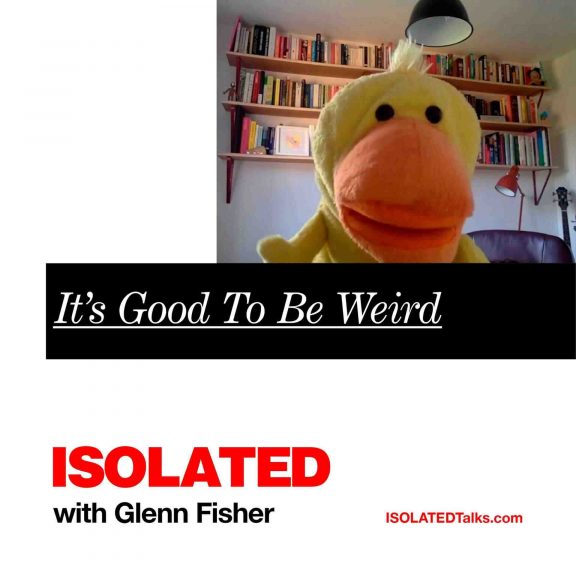 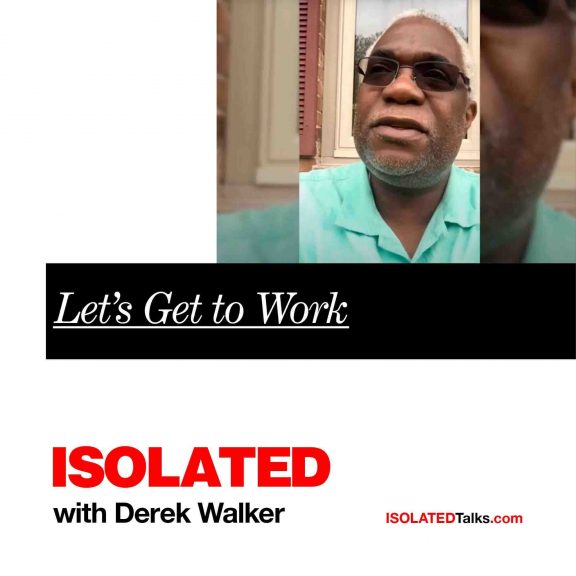 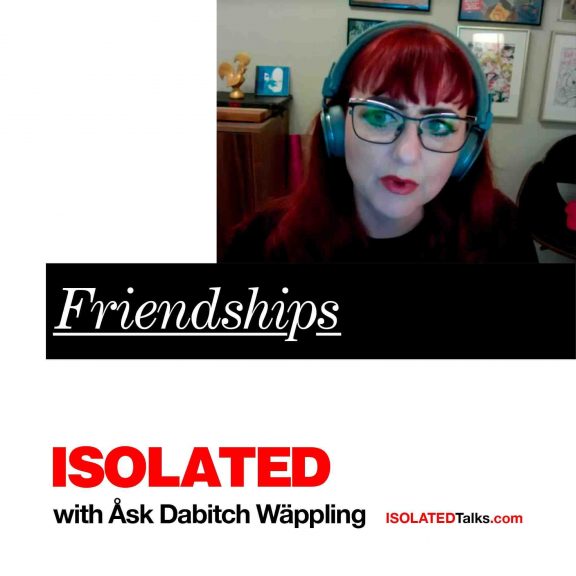 ❤️ It's hugely important to note, that this project was launched with the brilliant Glenn Fisher, Tommy Mason and Matt Ballington, and would not have been nearly as successful without their talent and generosity. ❤️

What they say about ISOLATED Talks®...

“Amidst widespread social distancing measures and national lockdowns, Giles brought people together to share ideas. Thanks to his phenomenal efforts, and the support of some incredible contributors, the project has raised thousands. Thank you so much.”

“The #ISOLATEDTalks series is fantastic - over 100 talks from a huge variety of marketing minds, we often wouldn't get the chance to hear from, on the broadest topics imaginable”

“This is without doubt, one of the most valuable and vital platforms for sharing ideas out there”

“ISOLATED Talks is absolutely brilliant. It's one of those ideas I wish I'd done myself.” 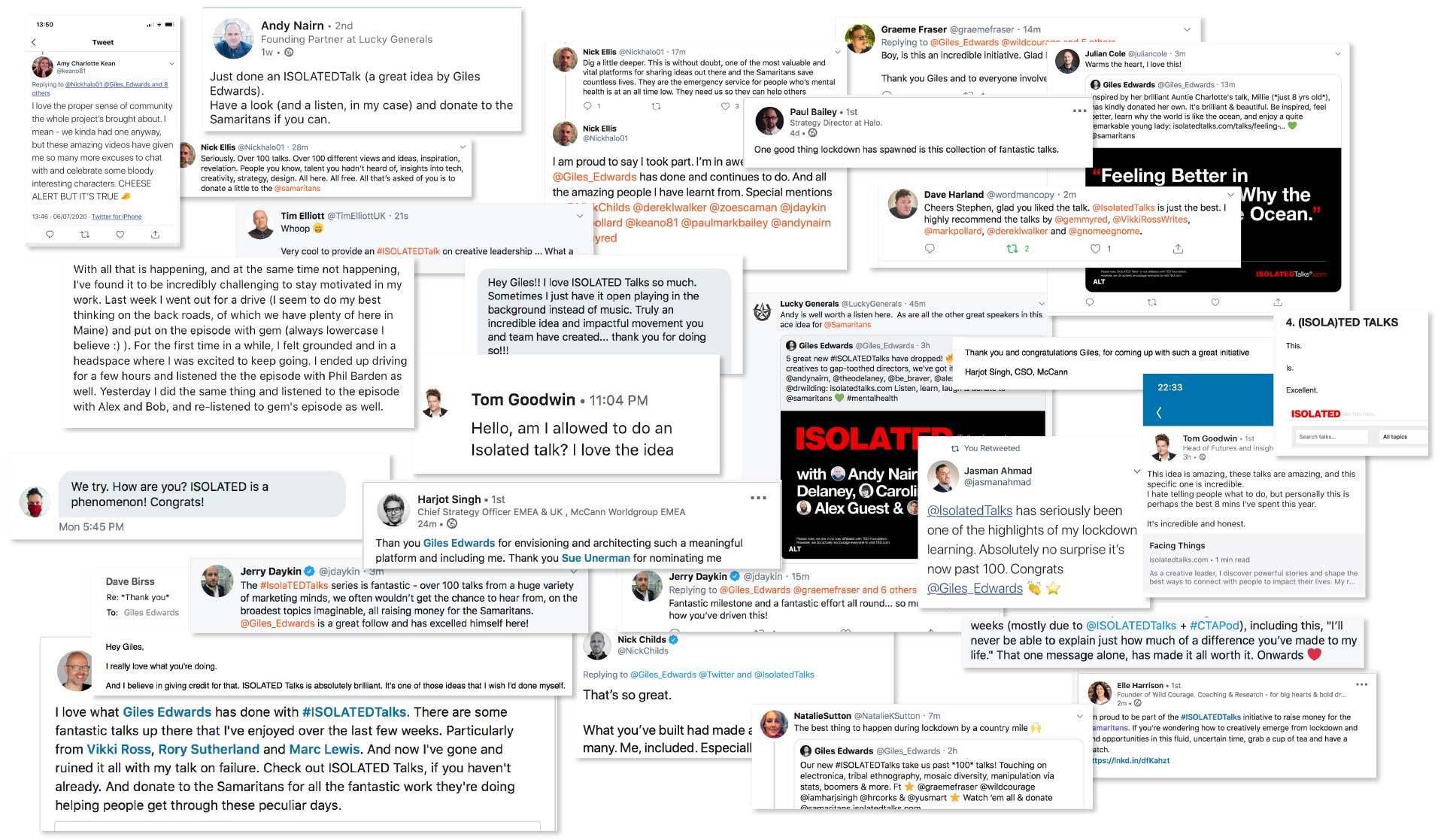 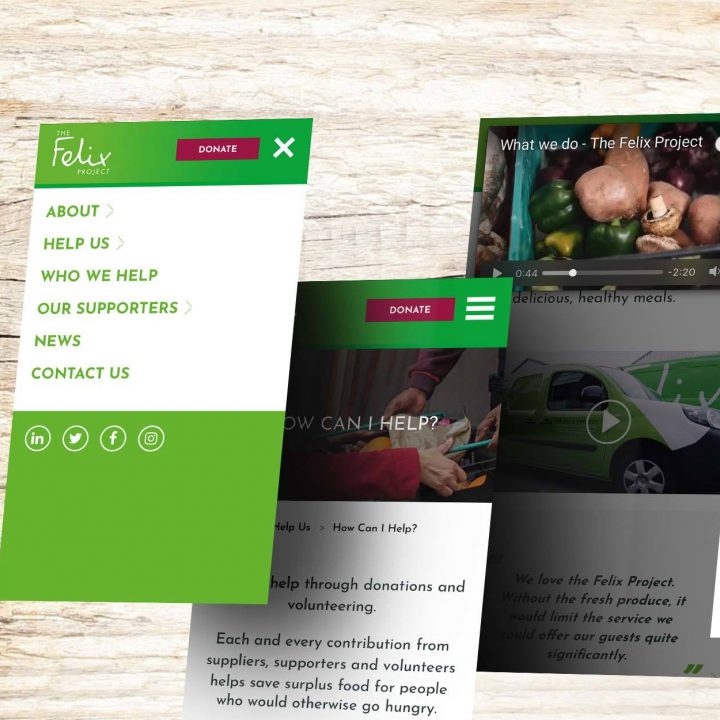 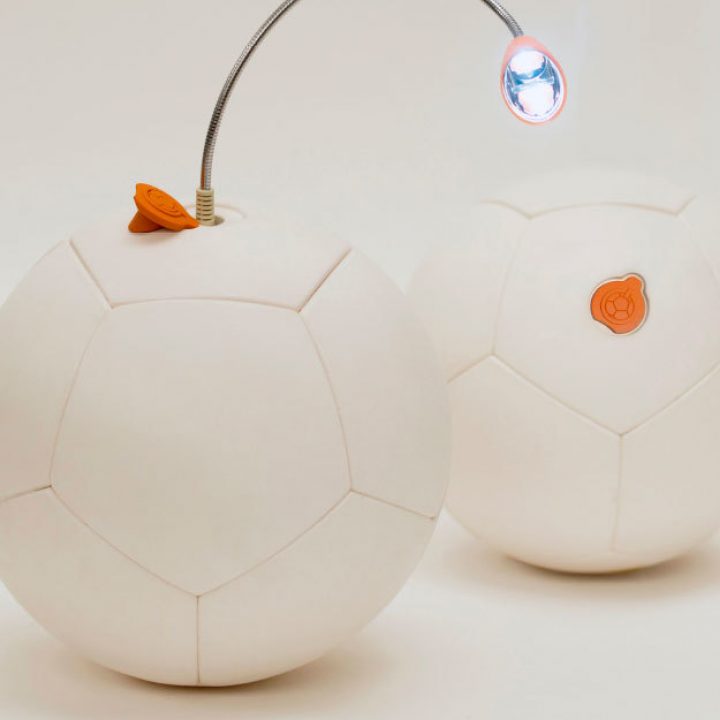