Is it truly of any value?

I am constantly targeted by the Pantene Pro-V ad featuring Ellie Goulding.

For about the last 2-3 months, pretty much every time I visit YouTube to listen to music (my Discman is in the menders), I am constantly targeted by the Pantene Pro-V ad featuring Ellie Goulding.

I don’t like Ellie Goulding. I never listen to her music. It’s nothing personal, it’s just that it’s shite. I was meandering through obscure Libertines recordings on YouTube, for the most part, but it got me thinking on the bigger picture of online advertising, and why was I being served this advert. It was so misplaced and a waste of time. It even began to infuriate me a little.

It’s the advertiser’s biggest fear. No ROI. And you may well have been on the receiving end of it. That £1k spend on online ads, and 4 weeks later, what have you got to show for it? A hastily put together PDF, detailing 6 click-throughs that resulted in a 5 second read of a 3 year-old blog post, a nosey at your secretary’s bio page, 3 basket abandonments and a ‘we welcome your feedback’ comment from a dandy enquiring if your secretary is free for elevensies.

So I started to read about value for money in online advertising, and it quickly led me to Ad Fraud. Estimates are that billions of dollars are lost annually because of fraudulent clicks, fake traffic, and the like. But because of the way the online-advertising market is structured, with a hazy myriad of middlemen and ad networks, there is little incentive for anyone to stop it. The following diagram, from the World Federation of Advertisers (via the great blog of Bob Hoffman) provides a good visualisation of this. 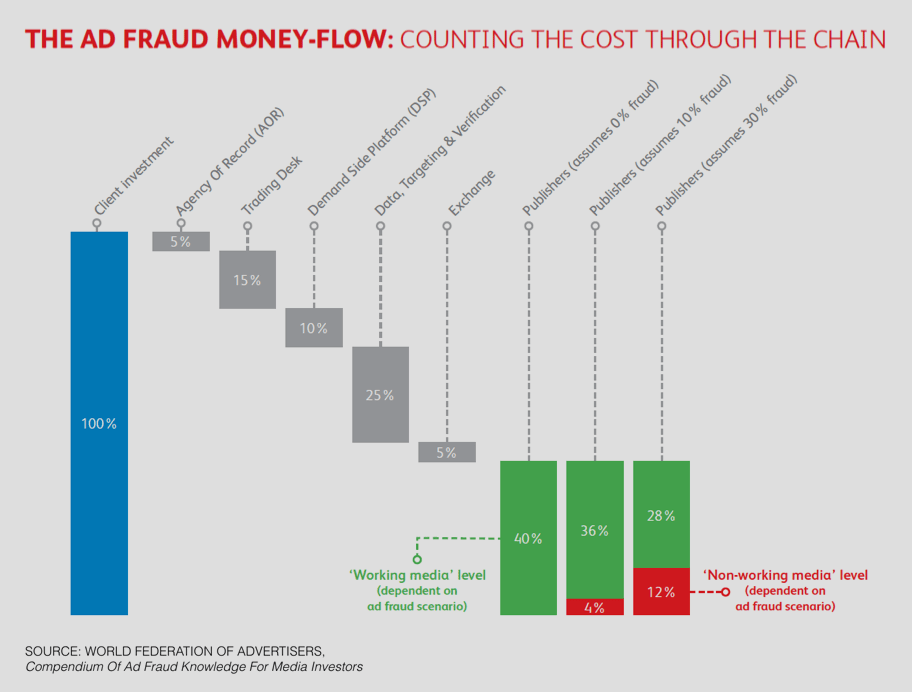 Online advertising is for the most part impersonal, emotionless and untrustworthy...

Here are some quite eyebrow-raising stats and facts I’ve come across:

• Less than half of all Internet ads are even seen by humans.
• The Guardian reports that 60-70% of online ad budgets are being scraped off by ad tech middlemen.
• The average click-through rate of display ads across all formats and placements is 0.06%.
• There are now at least 198 million active ad block users around the world.

It’s enough to put you right off. Also, not many people like ads, that’s the cold, harsh truth. They certainly don’t like bad ads. Online advertising is for the most part impersonal, emotionless and untrustworthy, and thus the mass disengagement and huge rise in ad blockers is understandable.

So if you want to spend a few quid online, what’s best? Naturally some will point you to social media. Maybe Facebook is best of a bad bunch. For all their own smoke and mirrors, it has a qualitative worth for gauging brand reputation, if nothing else, amongst the 100’s of emoji-laden comments your boosted post may get. Facebook advertising, or boosting, if done well, can get you into the inner sanctum of a person’s life, as the adverts are somewhat native in nature, and don’t disrupt the intimate person-to-person dynamic of social too much. Native advertising in general could well be the key to successful online ads, something that I’ve blogged on previously.

It’s worth remembering, however, that a hell of a lot more people are directed to your website by search than they are by social media. So Google AdWords does have some merit. It is not too invasive and puts your business in front of people who are at least searching for the product/service you provide.

What’s an alternative away from online? Well, if you have a sumptuous budget, TV. A bit like those internet death hoaxes that announce the untimely demise of the likes of Paul McCartney and…Dave Benson Philips, TV is actually very much still alive. You only have to look at Christmas to see that. Both Bob Hoffman and Mark Ritson make this point; people are watching just as much TV as they were before, and the vast majority of video watching is happening via our TV screens, not our mobiles, nor our tablets/laptops.

Here are some numbers from Bob Hoffman’s recent blog:

In the last year, the average adult consumed 2,295 minutes of video a week. Here's the breakdown by device:

I actually recall watching a great talk by Mark Ritson, where he broke down the stats and compared the number of weekly active, engaging followers of a brand on Facebook (a mere few thousand), to the millions who would watch a TV advert.

"6.8 million viewers certainly appears impressive. But as usual with digital video it’s only impressive if you use ridiculously self-serving horseshoe metrics." Professor (and legend) Mark Ritson

But what if you don’t have a budget to take on John Lewis’ Buster the Boxer? As an agency, can we guarantee that none of the online advertising we do for you won’t get gorged on by a fraudulent Russian super-bot machine* that eats views? No. But then no one can. If they tell you they can, they are lying. The industry is just not on top of ad fraud. At all. But at Gasp, we do have our Andrew who is a guru on Google AdWords. I’m sure he would tell you a bit about it, and see if it’s right for you.

But of course, there is so much more to online. Maybe online is not the answer. We love a bit of offline creative mischief at Gasp, no more so evinced than in this piece of Guerilla marketing we did for Windlesham Golf Club. Please peruse.

If any of this has piqued your interest, and you want to pop in for a cuppa, a chat, and watch our Creative Director and Founder, Giles, play darts and check out in three darts from 117 (we have not heard the end of it), then give us a call.

We’d love to talk to you.

A couple of weeks on, The Blogfather deconstructs the recent Pepsi ad to glean some useful nuggets of insight, before laying into United Airlines.

The Blogfather goes on his first inquisitive delve of 2016 to see if billboards are still a relevant part of the Marcom mix.