Make it worth my while

It’s time to start charging for the magic, people.

The Blogfather has called in a few favours, spoke to a fence, and got his hands on, just for you, how to break away from billable time and charge for creativity.

A well-known and well-used phrase.

But the correlation between how much time you spend on something and what you get out of it, as a result, has such a vast spectrum of different potential outcomes, that it means something different to everyone.

For example, take Kylian Mbappé; the overpaid, yet still, miserable pig’s bladder belter who is the most highly paid footballer in the world. In the time it took me to write the opening sentences of this blog (a minute), he has pocketed €416. Obscene. His wage ticker looks like a U.K electricity meter. And he probably hasn’t even produced anything in that minute, other than sending an email to confirm his attendance at a Killing Kittens ‘sex festival’, to quote the amazing Lynn from Alan Partridge.

By way of contrast, in the time it has taken me to write this blog, a freelance copywriter somewhere has probably nailed the market positioning for a new app release, just for a monkey. Yet the value of that could run into tens, hundreds of thousands to the client…

A relative bargain, right? Slight tangent; here are two cracking copy lads that the Blogfather can tip the wink to and make an introduction to at a quiet cafe just off the docks (not before 4 pm though) if you like: Andrew Boulton and Dave Harland.

We’ve blogged on the topic of creating the perception of value before, including a great experiment from Richard Shotton and one of Rory Sutherland’s infinite golden nuggets, but it has come into focus again with a recent talk that …Gasp! gaffer Giles Edwards gave, on how to break away from billable time and charge for creativity.

The significance of pricing correctly cannot be overstated. You can work harder, smarter, change your processes, or whatever else – but if you’re not charging correctly, it’s not going to change the prospects of your business.

Here’s some pearlers of advice, plucked from his oratory oyster, by way of a tempting taster.

Firstly; stop charging for your time!

Sell your value, not your costs. And also change the language you use to talk about it. 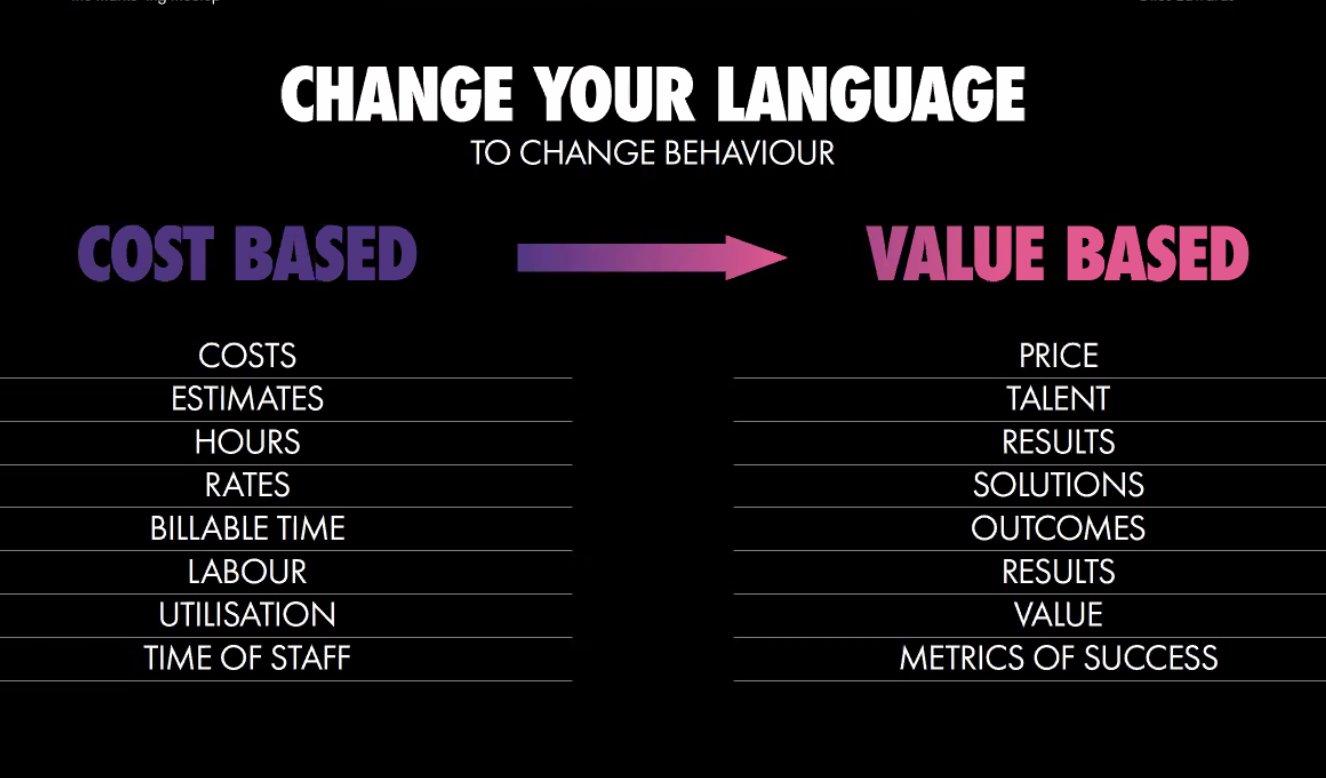 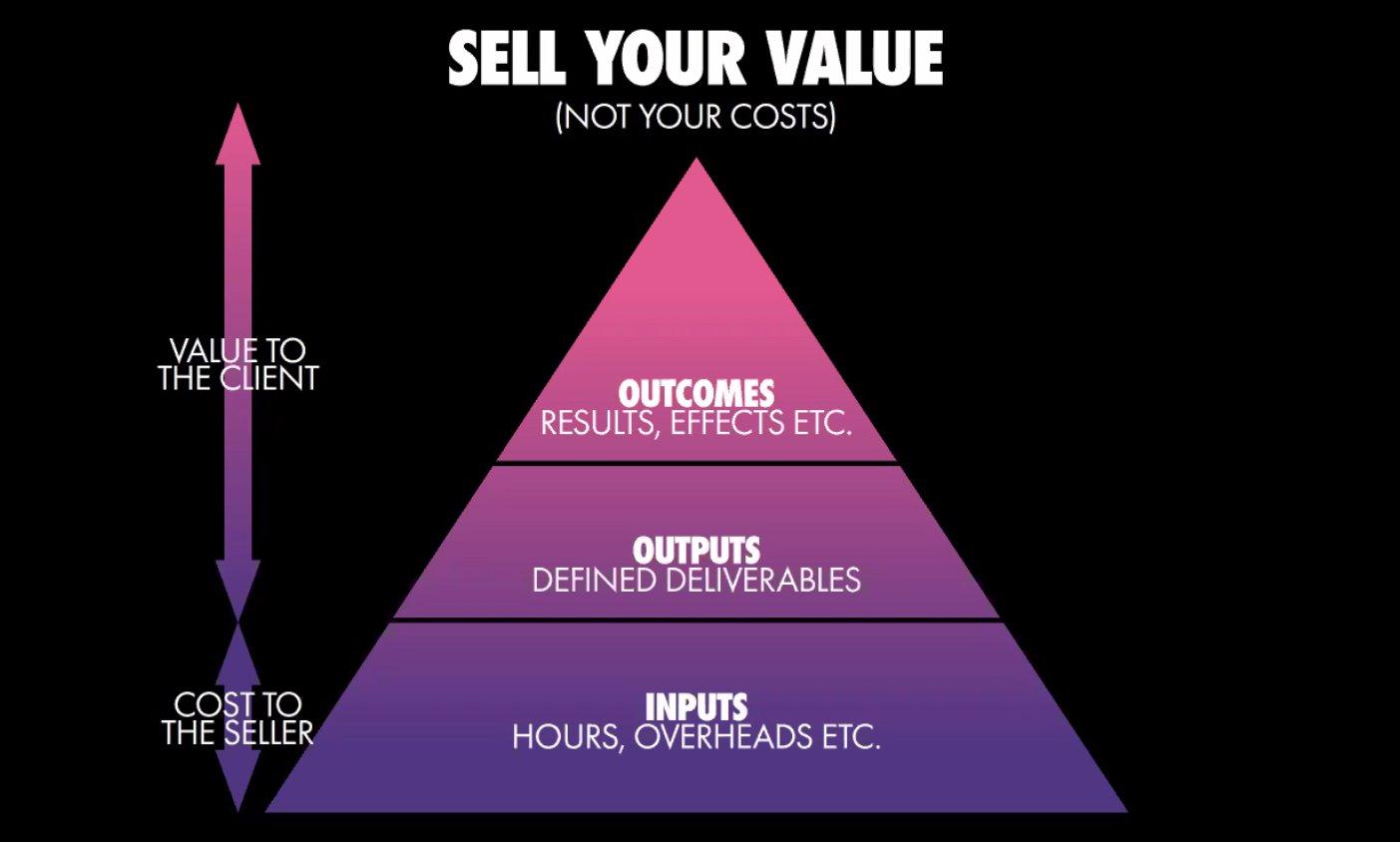 Here is a meatier takeaway, like those Brazilian restaurants where they carve meat straight off a large skewer (handy impromptu fencing weapon) directly onto your plate. Yum.

In creative projects, there are two kinds of work. First, there is the ‘factory’ work (the gaffer acknowledged the crudeness of this statement). This is the day-to-day work: an example being something like resizing an ad for a client. It might be general admin or operational work. Here, a ‘cost-plus’ model will probably cut the mustard.

But then there is the ‘magic’ work. Creative, knowledge work that is ideas and value creation. Here, the value of the work has no correlation to the output. In these cases, point number two comes into play…

Crucially and succinctly, your mindset needs to be:

Anyway, enough tasty titbits. This is just the tip of the tipsberg (?!) when it comes to the talk itself, so go digest it all until you are bloated and need a little glass of schnapps in your armchair afterwards.

But before you leg it, here is some bonus content, off the back of the talk and further questions Giles got.

“My advice to many of you, it feels, is simply to start breaking down what you already do into two categories. The factory work and the magic. The lead gen campaign I shared in the talk, for example, could be:

There is flex in the first price, dependent on all sorts of variables. And working this way will allow you to start exploring pricing options without jumping straight to the dreamy lands of outcome-based. And without, crucially, making wholesale changes.”

This talk is just one in a whole series from Joe Glover’s marvelous The Marketing Meetup, so go check out the rest and give them a follow.

And if you want to talk to us about creating the magic, you know where we are.

You know it makes sense.

A recap of a rowdy rendezvous between …Gasp! co-founder and Creative Director, Giles Edwards, and a pair of pesky pals across the pond, The Brief Bros.

The Blogfather goes off on a ChuckleVision/advert jingle tangent before reining it back in to tell you why you really need to sort out your purchase funnel, sunshine.

The Blogfather tucks into the meaty topic of marketing planning, giving guidance on how to approach it and which Godfathers of planning to get stuck into, namely Mark Ritson and Stephen King (not the horror writing dude).

The Blogfather and his better half learn the true value of things the hard way, going all ‘Bonnie and Clyde’ as they go after eBay sharks, Marks & Spencer and an extortionate t-shirt seller, but do find time for Ikea.