A Long Road Back

Just 5 weeks ago I was sitting in a tone of voice session where Volkswagen were held up as a great example of both short and long copy, and rightly so.

Deliberate deception is worse than a faulty part. It undermines the honesty and trust that their iconic tone of voice has carefully cultivated across the decades. It will take quite a bit of time and a lot of exceptional marketing for them to get back up to their once lofty place.

Volkswagen has a long history of nailing their advertising, all emanating from the iconic ‘Lemon’ and ‘Think Small’ ads which helped launch the VW Beetle in the U.S, back in the early 60’s.

The main thing that strikes me when reading the long copy for these ads is that they could have been written yesterday. It must have been exciting in the 60’s to see these ads breaking the mould. Boldly honest with a fresh, self-deprecating humour. Pioneering, timeless copy that is true genius.

Jump forward to now, and the future is looking exceptionally uncertain for Volkswagen. Their manipulation of car emissions, by inserting a defeat device into some diesel engines to falsify emissions data, has rocked the company, wiping billions off their global value and causing its chief executive Martin Winterkorn to resign, with the prospect of criminal charges to come.

This topical VW Viz Top Tip made us laugh:

"VOLKSWAGEN. Put things in perspective by pointing out it’s not as if you fucked a dead pig in the face."

It actually raises quite a pertinent point. Putting their misdemeanor into perspective could help. Initially I thought that long-term, Volkswagen won’t be permanently damaged by this. The story is still unfolding and expanding, and it seems more car manufacturers may get implicated, so it then becomes a bit like the MP’s expenses scandal; public opinion dismisses and forgets it, as all parties have done it. It could become a car manufacturing industry problem, not only Volkswagen’s problem. Also, as much as it disappoints me to say it, I am not sure how much the average person truly cares about emissions. If Volkswagen had created a device to accelerate diesel consumption, in a dodgy deal with oil companies to boost diesel sales, then there would be more outcry, as it hits the consumer’s pocket.

But this morning I read a piece in The Drum containing some findings from YouGov BrandIndex UK, which indicate some severe brand damage for Volkswagen.

Sarah Murphy from You Gov, states: “experience tells us that once this metric begins a concerted move south, a brand is in trouble as it points to it being more than a headline-generated storm in a teacup and instead being a real problem that is having a notable impact on all areas of its public perception”.

Deliberate deception is worse than a faulty part. It undermines the honesty and trust that their iconic tone of voice has carefully cultivated across the decades. It will take quite a bit of time and a lot of exceptional marketing for them to get back up to their once lofty place.

The current situation has naturally made them ripe for parody. Vikki Ross pointed me in the direction of some great topical ads created by students she teaches at the London Advertising School, including this inspired ‘Melon’ ad. 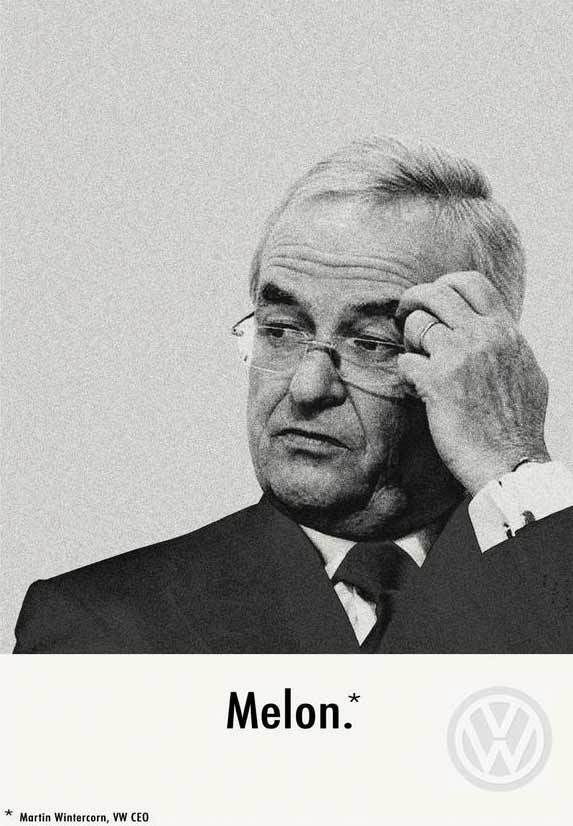 But if anyone can deal with the current situation with deft comedic self-deprecation, it is Volkswagen themselves. Maybe this could form part of the comeback; ads that send themselves up. It would be bold, but Volkswagen has certainly been bold in the past. Once the dust settles, maybe they should employ the bright young things at the SCA, and it will be time to resume being bold and honest. But the jury is still out on whether the public will see them as trust-worthy ever again.

The Blogfather defends marketing and goes after the Thomas Cook top brass who creamed off profits as they sailed the company into the rocks.