A virtual waste of time

The Blogfather had the misfortune to watch the biggest damp squib of the year, which got him pondering what makes for an engaging, ‘real’ experience.

...eating a plate of white bait in a dockside London pub is laced with fractionally more danger.

In terms of suspense, Jaws it weren’t. In fact, eating a plate of white bait in a dockside London pub is laced with fractionally more danger.

It was billed as an eagerly anticipated race, the latest in a long line of man vs beast episodes. But in reality, or whatever you want to call it, Phelps vs Shark was a virtual CGI shark taking a leisurely, slowed-down swim, superimposed onto footage of Michael Phelps taking a very energetic swim, aided by a fake fin. The shark showboated as it came to the finish line, to make it fractionally more interesting, but ultimately the whole thing was rather underwhelming. Have a little look below.

...we could not have expected Phelps to have been put in a pool with a real shark in some speedos and a pair of goggles (I’d have loved that too)

It did draw 5 million views, to be fair, although 4.95m of them subsequently said they thought it was shite*. It left a lot of people feeling short changed, but the creation of virtual worlds and CGI is the future, right? That’s what everyone bangs on about. So why didn’t people really take to this virtual shark?

Well, it’s a bit like going to the Zoo, walking past the bear enclosure and seeing Bungle from Rainbow camply waving at you (personally, I would love this). Clearly, we could not have expected Phelps to have been put in a pool with a real shark in some speedos and a pair of goggles (I’d have loved that too), but when you boil it down it doesn’t convince because it just isn’t real.

There’s a real obsession with creating virtual worlds these days, encapsulated perfectly in this spoof ‘Real Reality’ video from the NHL.

I saw this video as part of a great presentation from Mark Ritson this week, entitled; Making Marketing Great Again. He spoke of how we need an end to the prevalence amongst marketing peeps to think that all new stuff is completely and utterly cool, which leads to it ending up everywhere, with everyone becoming a champion of it; VR headsets and Pokémon Go being good examples.

Escapism is understandable, but for all its faults, the real world is ultimately where you’re going to make your money, and where all our most meaningful interactions happen. There’s no doubt that tech, VR and all that jazz are capable of some cool stuff, and it will be even better in the future, but it takes time for stuff to happen, things change slowly, a point also made by Mark.

Furthermore, it takes people even longer to change, and adjust; that’s if they ever truly do at all. Mark Ritson quoted Bill Bernbach in his presentation:

“A communicator must be concerned with the unchanged man.”

Anyway, by way of a nice contrast, I chanced across something a bit different at Waterloo station recently.

(As an aside, I arrived at Waterloo having travelled on a few escalators with blank advertising display boards. Considering that the advert for an old pantomime mentioned in this blog is still on display at Romford station, maybe advertising on public transport is on its arse a little.)

But to continue. You often find random, eye-catching marketing props on the concourse at Waterloo, and in this instance, it was a huge pile of top hats, with a single letter emblazoned on all of them. Invariably I walk straight past any promo stuff I encounter, but with my curiosity piqued, I stopped to take a photo. As I did so, a well-dressed gentleman approached to inform me what the Dickens it all meant. It was, in essence, a word search, and when you had found the word, you had to either say it to one of the guardians of the hats or enter it into a website, for a chance to win goodies. 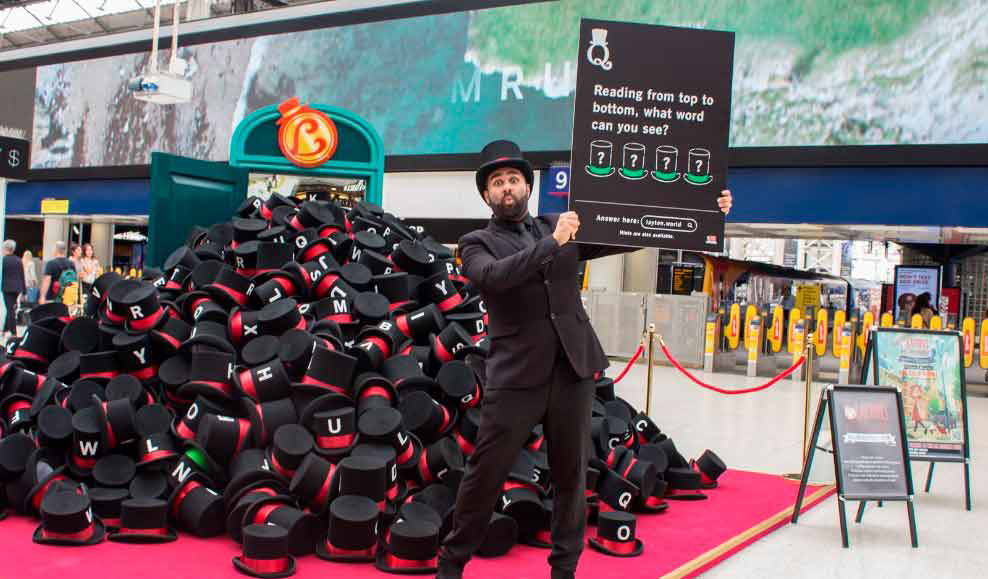 It was in essence a word search, and when you had found the word, you had to either say it to one of the guardians of the hats, or enter it into a website, for a chance to win goodies.

It was created by the MKTG agency (part of the Dentsu Aegis network) to promote the launch of the latest mobile app strategic/puzzle game from the Professor Layton series (had never heard of it before this, in truth).

It probably won’t win any awards, but it was a clever tweak on an old past time, and crucially it worked due to the very real, physical curiosity of the piece, and the interaction with the well-dressed players.

In writing this blog I looked at social for any photos/sentiment around the Layton’s piece, but found little. Part of my brain immediately thought; no social coverage = unsuccessful idea. It’s easy to get sucked in to thinking that all good marketing campaigns must get a tonne of social mentions.

I had to remember my own engaging experience on the concourse of Waterloo, and those of the other commuters around me. There’s no real ‘digital’ record of that, just a few photos, but maybe that’s a good thing.

*Absolutely zero stats to back this up. None.

The Blogfather puts on his irreverent boxing gloves and lands one on the chops of Tech, and gives Will.i.am a pounding.

The Blogfather explores if we can artificially produce creativity, and what we may lose in the process.

The Blogfather scythes through the hoo-hah in an attempt to see why the human race is rejecting the real world and disappearing down a Pokémon-style rabbit hole. Or getting stuck in a cave. Or trespassing onto someone’s private residence.

The Blogfather looks at robot auctions and reminisces on Lovejoy whilst considering the larger sphere of programmatic mobile advertising.