Message in a Bottle

Why waiting 25 years for a message can be a good thing.

The Blogfather dissects what makes for good messaging this week, inspired by a message in a bottle washed up on a Norwegian coastline 25 years after it was dropped into the Scottish sea.

If you are messaging via an overused channel, it’s very hard to make them give a toss.

The vast majority of messages sent these days are delivered instantly, be it via messaging apps, email or a cheeky wink. Whilst this is clearly exceptionally handy, these means of message delivery have nothing special about them, nothing memorable.

That’s why mass email sending returns such a relatively small yield of opens, clicks and replies. You could have the most perfectly written piece of long-form sales copy in the world, but if the receiver hasn’t a clue who you are, and you are messaging via an overused channel, it’s very hard to make them give a toss.

So, by way of a beautiful contrast, and a timely metaphor, this story caught my eye recently.

Back in 2020, a message in a bottle was washed up on the shores of Norway, found by a lady called Elena and originally dropped into the sea by an 8-year-old girl called Joanna from a fishing boat off Peterhead, Aberdeenshire. An 8-year-old girl who is now a 34-year-old woman.

So it took 25 years for this message to be delivered. At Gasp we do a fair bit of unique direct mail fulfilment, and if a client’s DM took 25 years to be delivered we’d be straight on the blower to the fulfilment house for some answers. Some might say putting something in the second class post achieves a similar effect.

But in this context the long wait takes on a huge magical quality. To some degree, if what was written on the paper within the bottle had been very mundane it would not have mattered (as it happened it contained some gold and was signed off with; “By the way I hate boys”).

As an aside, the reason it has taken two years for the story to get into the press is because, somewhat ironically, it took Joanna two years to notice Elena’s message request on Facebook.

But to continue. If you want something to have an impact on a potential prospect and target, to even be opened to begin with, it pays to be creative and think of the means of delivering the message.

The more messages you try to communicate, the less likelihood there is of any single message being communicated.

We are not ones to overly blow our own trumpet at Gasp (we are more into sexy saxophone), but our last blog covered some distinct and effective ways we’ve sent something the good old fashioned way, via the post.

So, your ‘Trojan Horse’ DM has found its way past the gatekeeper and into the target’s premises, rousing curiosity as it goes and lands on the CEO’s desk. What should your message say?

Well, in most cases, as little as possible. If you want people to remember your key message, you’re best delivering one message, not two or more. The more messages you try to communicate, the less likelihood there is of any single message being communicated. 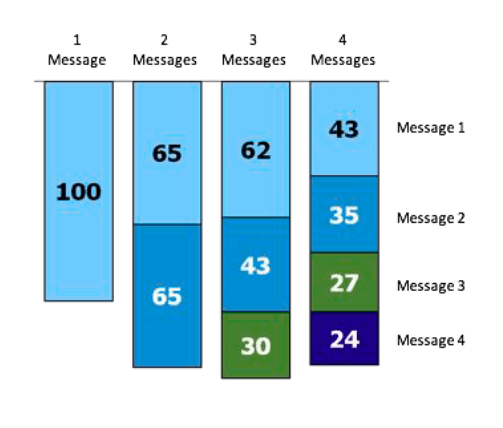 Now, it may be harsh to say, but this is where the 8-year old Joanna went wrong. She describes her pet dog, her school projects, her love of collecting Blu Tack, her "rather big house", her love of teddy bears, and of course, the fact she hates boys.

But The Blogfather is not going to start berating an 8-year-old girl. Not after last time, and the debacle at the local soft play area.

That’s a story for another time.

The Blogfather tears into all things digital and virtual this week but talks up his love and respect for Drayton Bird and Malcolm Auld before leaving you with a great suggestion for your 2022 marketing mix.

The Blogfather explores the marketing merits of Gwyneth Paltrow’s vagina…candle and looks ahead to the Super Bowl ads dropping, whilst hoping his meta data is not truncated awkwardly by Google with an ellipsis…

The Blogfather reflects on simplicity in marketing, always inspired by Dave Trott and, surprisingly, Norway.