Is Digital Advertising about as useful as a poster for a pantomime in Spring?

The Blogfather concludes his Digital Advertising Trilogy, writes a bit of fake news, and encounters a pantomime in Spring.

Yet Bob Hoffman believes there is a bigger issue: the prevalence of one, large fantasy “that people would want to interact with online advertising” in the first place.

I found myself all of a quandary with the subject for this week’s blog. Akin to Peter Jackson, who must have wondered if there was really enough source material to stretch The Hobbit out to three movies (before the $ signs said ‘yes, Peter’), I likewise pondered whether I could write again on digital advertising, having recently blogged on signalling and context, all with an undercurrent of online ad-bashing.

But as the Google ad scandal escalates, and as the great Bob Hoffman persists like an articulate dog with a bone in his delightful, lid-lifting blogs on the subject, it’s clear that the topic is still all the rage.

It’s a case of take your pick in terms of the scandals on offer with Google. On YouTube, they just don’t seem to be able to stop brands’ ads appearing alongside inappropriate content. Trust has been well and truly lost, so YouTube have turned to third parties for help. Omnicom has waded into the situation, sifting through hundreds of thousands of YouTube videos on a daily basis to ensure they are safe for its advertisers to appear in context with.

Google has also tweaked its auction and removed ‘Last Look’ (where its own exchange can bid last and thus outbid the rest), so it no longer favours its own bids over the competition.

Yet Bob Hoffman believes there is a bigger issue: the prevalence of one, large fantasy “that people would want to interact with online advertising” in the first place.

It’s hard to disagree with this, in principle. It’s questionable how many people truly interact with online ads. What is a Facebook Impression truly worth? Facebook tell you that the cost per 1000 Impressions is £1.49p or similar. It’s such a good ratio, it must be good value, right?

In Dave Trott’s most recent blog, on the subject of digital advertising and entitled The Chairman’s Wife Syndrome, he states that, “the Internet Advertising Bureau standard for viewability is this: 50% of the pixels visible for one second.”

His point is that the great creative and resource put into your ad can be undermined by the poor context it appears in; in this case being scrolled over in a par sec by a disinterested consumer. This doesn’t sound particularly like good value. However, there is even worse value out there to be had. To be fair to Facebook, they have become more transparent about their myriad of metrics in recent months however, the result of this transparency is the revealing of some rather embarrassingly meaningless metrics.

Andrew Bosworth, Facebook’s vice-president of ads, revealed that they count an impression as, "more than zero pixels onscreen for more than zero seconds."

Makes you think. And it’s quite staggering that you are paying for that.

There’s no doubt that the signalling around online advert placing is of a low integrity, and it is the likes of click bate, fake news and disguised sponsored ads that contribute to this, leaving the majority of people thinking that the ads they are being served are cheap and untrustworthy.

Fake News is intriguing. An increasing and very real problem, although you could argue the Daily Mail has been publishing fake news for years. 2017 saw the inaugural International Fake News Day, taking place somewhat appropriately on April 1st. Facebook has recently rolled out a new tool to discredit Fake News quickly; it alerts users attempting to share fake news articles with a warning that the story has been disputed by one or more of its independent fact-checking partners. In the clampdown that media outlets are threatening, hopefully satirical stories don’t get outlawed. There should always be a place for ridiculous stories like this:

Richard Bacon speaks out on similar altercation suffered in 2009

“Whilst we loved him in Tremors, and can forgive him those frankly awful EE ads, we just couldn’t be 100% sure Kevin contained no bacon. His labelling would indicate the presence of bacon.” – Restaurant Owner

Dave Trott’s blog also spoke of the poor context of online advertising being the modern equivalent of a poster placed on a badly lit street in a poor part of town. True, but I encountered a beautiful reminder of how context still goes beyond digital on my commute this week.

Context is tricky. It can bite your arse. It can change form suddenly, like the sea, or a Tinder date, and become something you could never foresee. Most people would consider getting some over run for your above the line advertising as a good thing: free advertising, especially when it can cost a small fortune.

However, a few weeks after we have entered British Summer Time, and as the first blooms of Spring have well and truly burst forth, I came across this poster on Romford train station…for the pantomime Dick Whittington, starring the slightly scary Matthew Kelly. 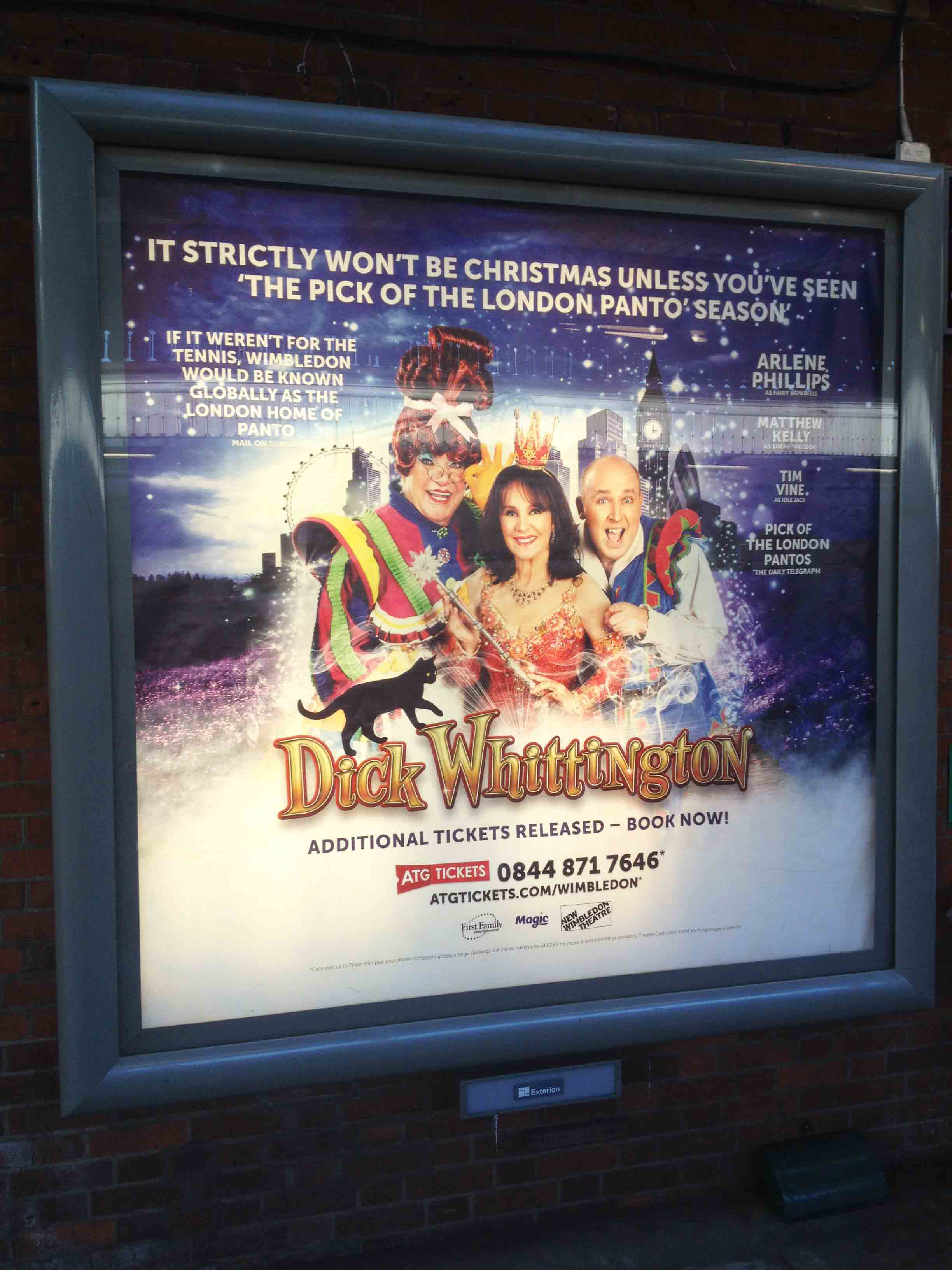 “Additional Tickets Released – Book Now!” it asks of you. But don’t try. No, this isn’t the most popular pantomime in the history of theatre, with an extended run into April. The poster has simply stayed up for 3 months after the event has closed.

It’s a little ridiculous, and induces a bit of melancholy in the viewer. It makes Exterion look like they can’t sell ad space, and The New Wimbledon Theatre Company look like their advertising calendar is seven months out of kilter. Not good for either party. Maybe they need an ad place holder like the below. I’m curious as to how much longer it will remain there. I’ll keep you posted. No pun intended.

It may sound like the name of a shit font, but could the work being done by Big Data company Cambridge Analytica lead to major advances in targeting? The Blogfather looks at the cut of their jib.

The Blogfather looks at the absurdity of Man, Marketing and Advertising as we find ourselves on the threshold of 2017, and mulls on what it could hold for us of a creative persuasion.