Unshackled creativity (and a good night out)

The Blogfather celebrates a stand-out advertising competition, and looks at how no limits and no rules is an exciting yet daunting thing.

There are three sure things in life: death, off-shore tax avoiding wankers like David Cameron’s dad, and the fact that the Chip Shop entry deadline will get extended (and it has been, to 13th April).

It’s that time of year again. That wondrous time of year, where there’s suddenly a bit more stretch to the evenings. Fresh from Easter, where we all prayed for the resurrection of the old Cadbury’s Cream Egg recipe, we now find ourselves plonked straight into the Chip Shop Awards season.

In their own words, the Chip Shop Awards “celebrates pure, unadulterated creativity.” In a world where provocative and uncompromising imagination is being increasingly shackled, it’s understandable why they get, quite literally, thousands of entries. Born ten years ago, it is very much an irreverent take on the whole advertising awards scene; if I told you there was a category called “Best Use of an Animal” well, you get the idea.

Yet it is still fiercely competitive, with a Chip being a much sought after thing, and the Awards as a whole is a huge, shiny bastion in a sea of fear of offending someone. There are three sure things in life: death, off-shore tax avoiding wankers like David Cameron’s dad, and the fact that the Chip Shop entry deadline will get extended (and it has been, to 13th April). But that’s good for us, as we can hone our entries, and think of new ones.

We love getting our creative fangs sunk into the Chip Shop’s succulent categories. We’re also fans of One Minute Briefs, created by Nick Entwistle, which condenses the creative process down to an instant atom of explosive ideas. Nick is also on the Chip Shop judges panel this year, so he knows his onions. And Chips, presumably.

My own personal inclination with a Chip Shop is to go for the biting satirical funnies, hence this rejected concept of mine for Best Ad from the Future: The Amazon Prime Attack Drone. The premise of the idea was that if you suspect your neighbour is in fact an ISIS sleeper cell (other terrorist brands are available), then you could avail of the Amazon Prime Attack Drone service to take them out. Didn’t quite work as an ad, but it is a fractionally more feasible business plan than Amazon trying to deliver their orders via drone. Or, I had Maria Sharapova fronting an ad campaign for Norfolk’s Waterways canal holidays. But I just couldn’t get the ‘no one touching her with a barge pole’ tag line to work. Shame.

But we can give you a sneak peak of a couple of our entries that did make the cut. The first is this one for Best Use of a Celebrity (Zayn Malik, formally of One Direction). It is built around a strong pun. Simple, witty and memorable.

The second entry is distinctly different.

We’ve taken the decision to publish our Chip Shop entry that feature’s Aylan Kurdi’s image, at the bottom of the blog. We realise some people may find it offensive, so please don’t scroll down if you feel it will upset you. Yet amongst all the often glib words about the "ongoing migrant crisis", it’s exceptionally easy to forget the reality of the desperate situation facing many refugees, which is the inherent motivation for the ad.

In a competition where the rules are removed, quite a bit of the discussion around the Chip Shop Awards centres around where is the line between being provocative and going too far.

Barney Worfolk-Smith, director at That Lot and a Chip Shop judge this year, answers this with the three C’s:

“1) The Client (is it congruous with their comms) 2) The Context (stuff on Snapchat will be more 'raw' than on traditional channels, for example) 3) The Climate (people are very sensitive in general after events like the Paris attacks, for example).”

There is quite a lot to be said for these guiding principles. The hypothetical ‘Client’ in our instance is Save The Children, and charities have always needed to create maximum impact to garner donations. Strictly the ‘Context’ is the Chip Shops, where pushing boundaries is encouraged, but we would not fear to run this on billboards or in print magazines. Climate is very subjective, but you could argue that in the UK we have a Prime Minister advocating a stricter policy on immigrants that creates a climate where it is very easy to be less mindful of those a lot less fortunate than ourselves overseas.

The image of Aylan Kurdi speaks for itself and has already been spread widely across media. I recall first seeing it on Channel 4 news, it stopped me in my tracks. Putting it into this context and referencing the somewhat overblown controversy of the Beach Body advert adds weight and creates a strong call to action for Save The Children. There is no shirking from it being very upsetting, and the truth is we struggled to even submit it. But ultimately we believe in it.

There is certainly a time and a place to be provocative. There will always be someone somewhere on social media just chomping at the bit to react negatively to something you put out. But sometimes you have just got to be brave and fearless (yet not reckless).

We’ve been nominated several times for a Chip Shop, but have not quite managed to bring home the bacon up to now. So we’re feeling a little bit Di Caprio, but hey, maybe this could be our year. 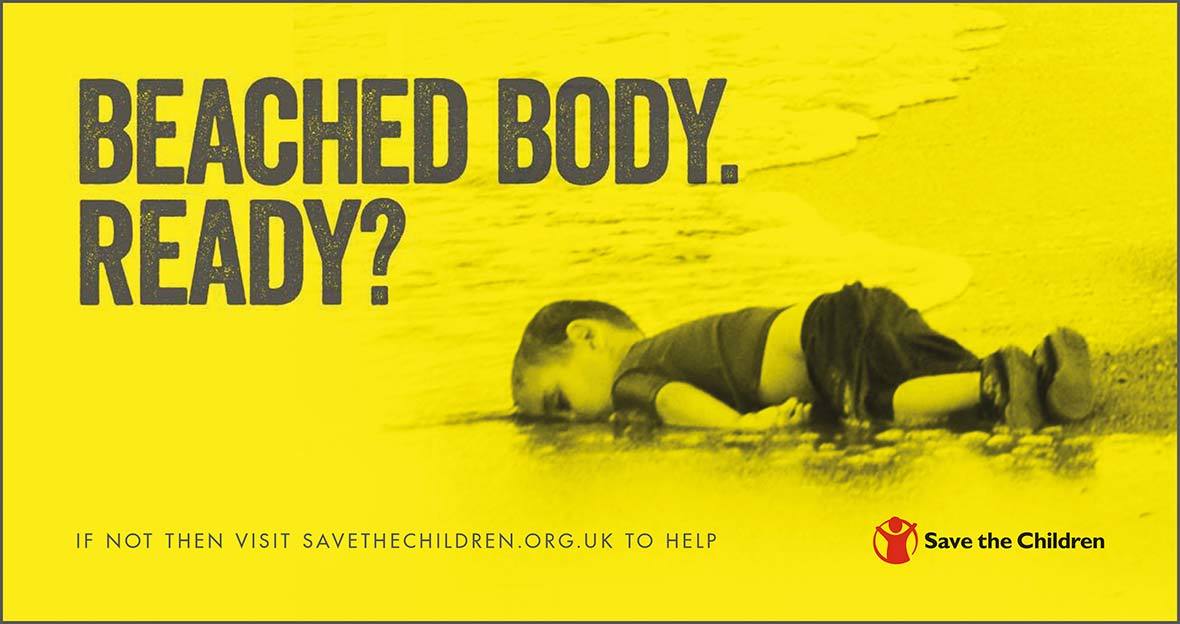 Last month the Chip Shop Awards judging took place and the panel, chaired by Nils Leonard from Grey LDN, met to decide who this year’s finalists are and who will be picking up the Chip and Vinegar awards.

Well the first bit is just good news for us really, but I hope you’ll take some vicarious pleasure from it.