My contribution to the ‘Fast Ads’ bit would be to hold Giles' jacket if he got a little warm, and generally convolute the creative process by suggesting shit ideas.

I thought I'd share a story with you this week.

You see - if you'd visited the Gasp office at the tail end of last week, you'd've wondered at the story behind the thousand-yard-stare on the face of our creative director - Giles.

It was The Drum Live that did it.

I'll start at the very beginning - which as Julie Andrews rightly pointed out - is a very good place to start.

Regular readers of this blog (and there are literally 'some') can't have missed my shameless posturing on behalf of the agency at our performance in The Drum's Tight Briefs competition this year.

To the uninitiated, Tight Briefs is to the creative department, what lifting weights is to athletes. It’s a challenge to create the best ad for a given brief in just one day. It’s run through The Drum’s website and readers vote for the winner.

We’ve had lots of wins in the competition you see, and it's resulted in Chip Shop Awards nominations and all sorts. However, perhaps the most exciting thing to come off the back of Tight Briefs was an invitation to attend The Drum Live. At the event, a whole issue of the magazine is created in just one day. Gasp was chosen to be one of the agencies to contribute to the ‘Fast Ads' section.

The ‘Fast Ads’ section was to work just like the Tight Briefs competition...or so we thought.

By the way, I should mention that in addition to our Creative Director – there was space for another Gasp attendee, and I - a humble account manger - was flattered when Giles asked me to accompany him.

Spirits were high when we arrived, the venue was cool and the breakfast was terrific - I had a coffee and ate about fourteen pastries.

Giles and I expected that over the course of the day we'd be asked to scamp-up a few ads and still have time to watch some of the speakers and of course hit the buffet.

My contribution to the ‘Fast Ads’ bit would be to hold Giles' jacket if he got a little warm, and generally convolute the creative process by suggesting shit ideas.

After the introductory talk from Dave Birrs and his posse, we filed into an adjoining room for the ‘Fast Ads’ talk - it would begin with an on-stage Q&A with: Unilever’s global media director Jay Altschuler, Barclays’ marketing director Sara Bennison and M&S's brand and marketing manager Ira Dubinsky.

Then came the setting of the briefs, and the divergence from the Tight Briefs formula. You see, with Tight Briefs, you simply get a one-sentence brief like;

‘Create an ad to cheer up Brazil’

And then you have one day to produce a one-page ad.

It quickly became clear that the Unilever and Barclay’s briefs would not be a single sentence, in fact they were more like a ten minute exposition…each.

Now this would be great, if we were to go away and work on a pitch for a couple of weeks, but when you've got just one afternoon to spunk-off two ideas for campaigns which have been troubling the two corporate giants’ appointed agencies for months - you do get slightly jittery.

Giles and I then felt the blood rushing through our ears when we were told that we'd have to present the ideas on the main stage in front of 400-odd people in just a few hours.

One of the creatives from another participating agency tweeted something along the lines of 'urrrmmm no one said anything about public speaking!?'

We jokingly discussed the possibility of simply 'running away' - I mean it's not like playing truant from school - you can't get a Saturday detention for bunking off The Drum Live can you?!

Rather than doing a runner altogether we legged-it to a coffee shop nearby to do a little 'organised ideation' (in P&G speak). And while I contributed almost nothing to the process, I did go and buy Giles an orange juice, and I don't mean to boast but I simply couldn't have done that had I not actually been there.

There was a further scare at lunchtime, when the ‘Fast Ads’ agencies were suddenly asked to get on the microphone and explain their initial thoughts on the briefs set just an hour or two earlier. Whilst it was nerve wracking, Giles did an excellent job while I stood next to him - giving the audience my ‘don’t fuck with us’ stare.

I also can’t emphasize enough that the lunchtime buffet was fantastic.

As the afternoon progressed, working on our slides and presentation became more frantic; the clock was ticking.

However I think we were about ready by the time one of the organisers told us that the show was running over and we’d have to truncate our presentation to just one brief.

I would be presenting Barclays you see, Giles - Unilever. This news meant we quickly had to force an equal compromise…so we agreed that Giles would present the Unilever campaign whilst I would sit in the audience and take pictures of him. I think you can be the judge of how well I did; here’s one… 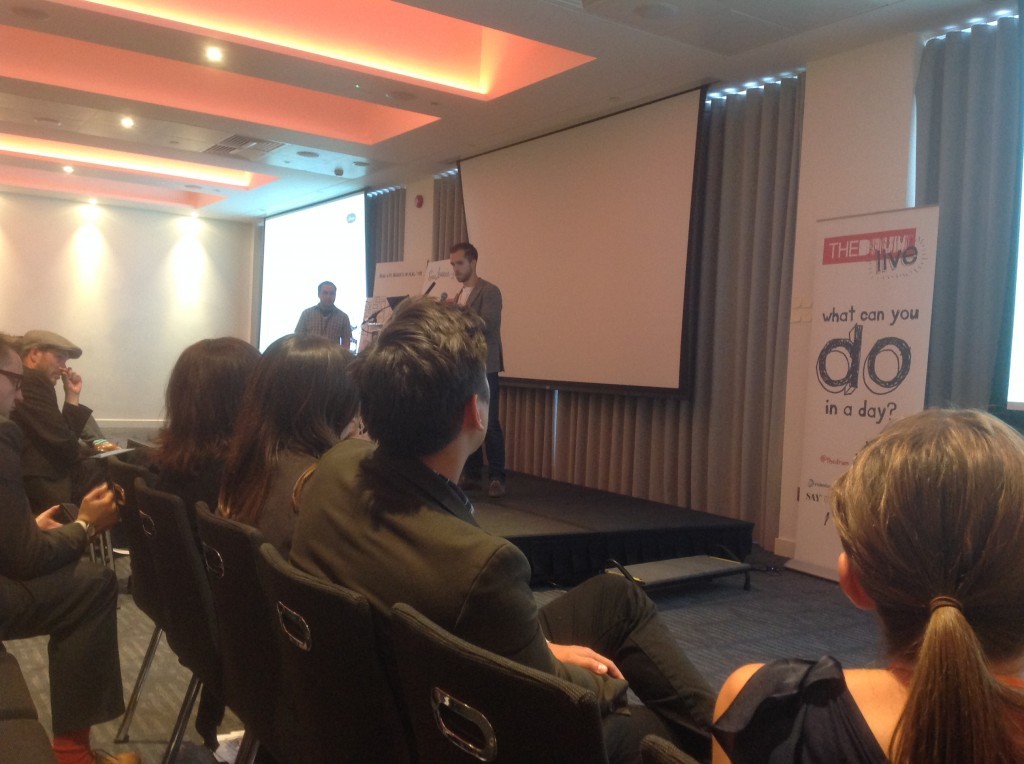 I must say, whilst it was a nervous and seriously challenging day for us, the event as a whole was great, and long may it continue. Furthermore, Giles did a wonderful job and was for my money the best of the ‘Fast Ads’ presenters. And if you think by saying that I’m just being sycophantic, then screw you…you weren’t there man!