Easier said than done, but vital for getting noticed.

...we love a bit of Dave Trott

Anyone who is even vaguely familiar with us at Gasp knows we love a bit of Dave Trott, and it was with much joy that we read a 30-year-old memo from Dave that came to light recently. In the memo, he asks his creative teams from back in the day at GGT to do things 'totally different' and create work that was 'unconventional'.

This could have been written yesterday, as its relevance is arguably even greater now, 30 years on. It is, without doubt, increasingly harder to stand out. There is a lot of mediocrity about. As another Gasp hero, Bob Hoffman, says; "Marketing today is a battle to be noticed. There is so much of it. It is so loud and so relentless."

So how do you go about being genuinely different? Having a grasp on how the human mind works helps, for starters. Last year, the Gasp team trundled off to see Dave Trott talk. One thing that stuck in our heads was how the human mind acts as a pattern making machine that organises things into groups.

Take a look at this:

What stands out? The X. Dave used the example of ads in an advert break (10 ads, with one that goes against the grain), but it can be applied to a lot of things. With one advert standing out as being genuinely different, the viewer lumps all the mediocre stuff, all the O's, into one group, leaving the different ad, the X, with 50% of the mind's attention.

Here is one of the greatest examples of achieving this kind of stand out in practice, from thrash metal band, Party Cannon, in this poster for Deathfest 2: 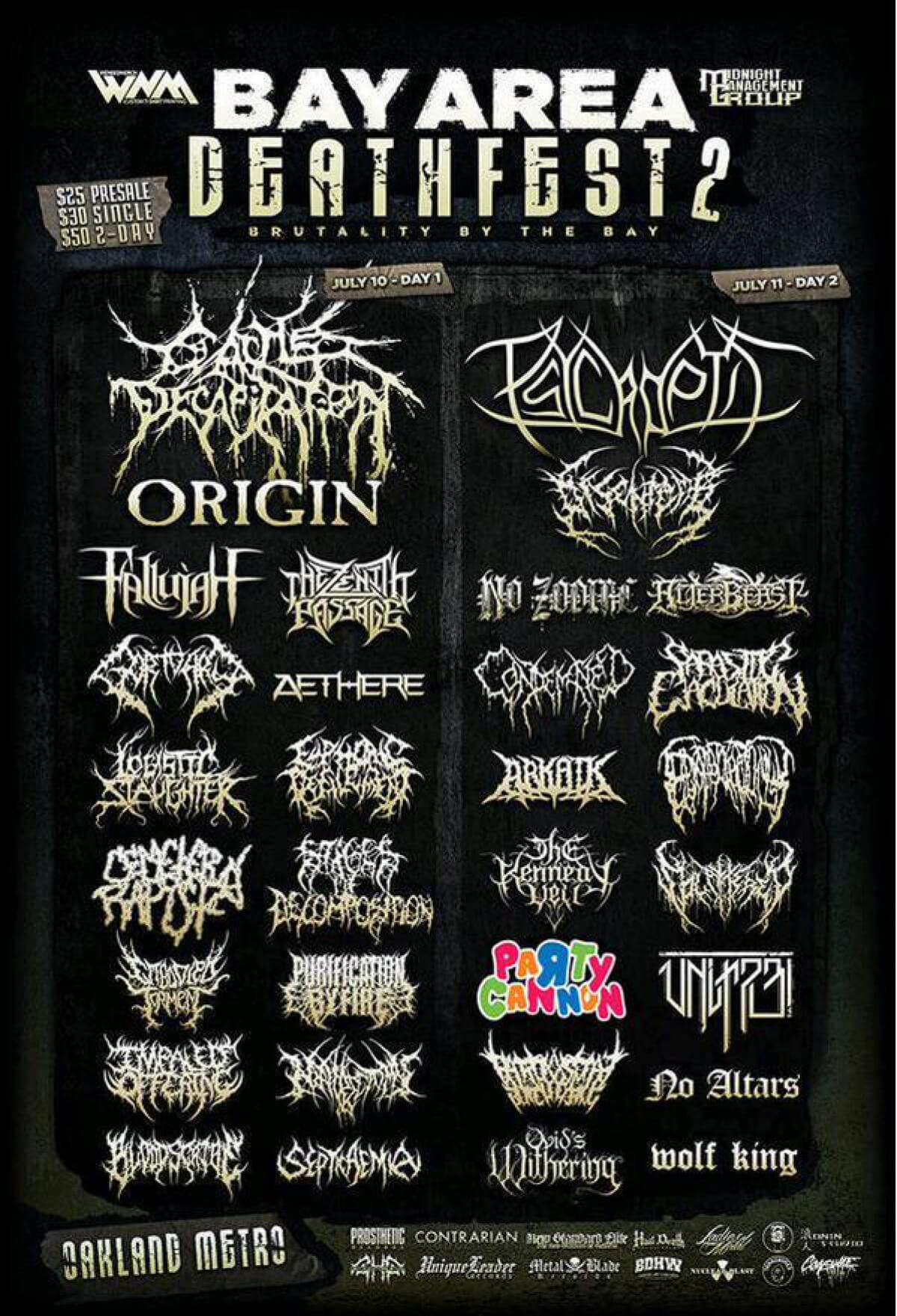 This is absolutely brilliant. Party Cannon wanted to send up the trend in thrash metal for logo fonts becoming nigh on ineligible, and in doing so gained at least 50% of the recall from this poster, from about only 3% of the media.

You have to avoid the 'Me Too' trap all the other thrash metal bands fell into. This is something we cover in our 6 fails to avoid in marketing, and it's something we frequently refer to with clients, and it is key when defining any aesthetic brand elements. It's something the founders of one of our long standing clients, Jump Giants, tell us they learnt from us, when we created some genuine brand stand out for them, and it now influences all they do.

There is more learning to take from the Party Cannon logo. People like humour. People like brands that don't take themselves too seriously. In fact, there is evidence that brands that exhibit imperfections are more appealing; "The Pratfall Effect" - something Richard Shotton covers in his outstanding new book, The Choice Factory. Fallibility is a very human trait. People empathise with this.

All of the above is why this copy in the response to the chicken shortage from KFC this week is bang on point: 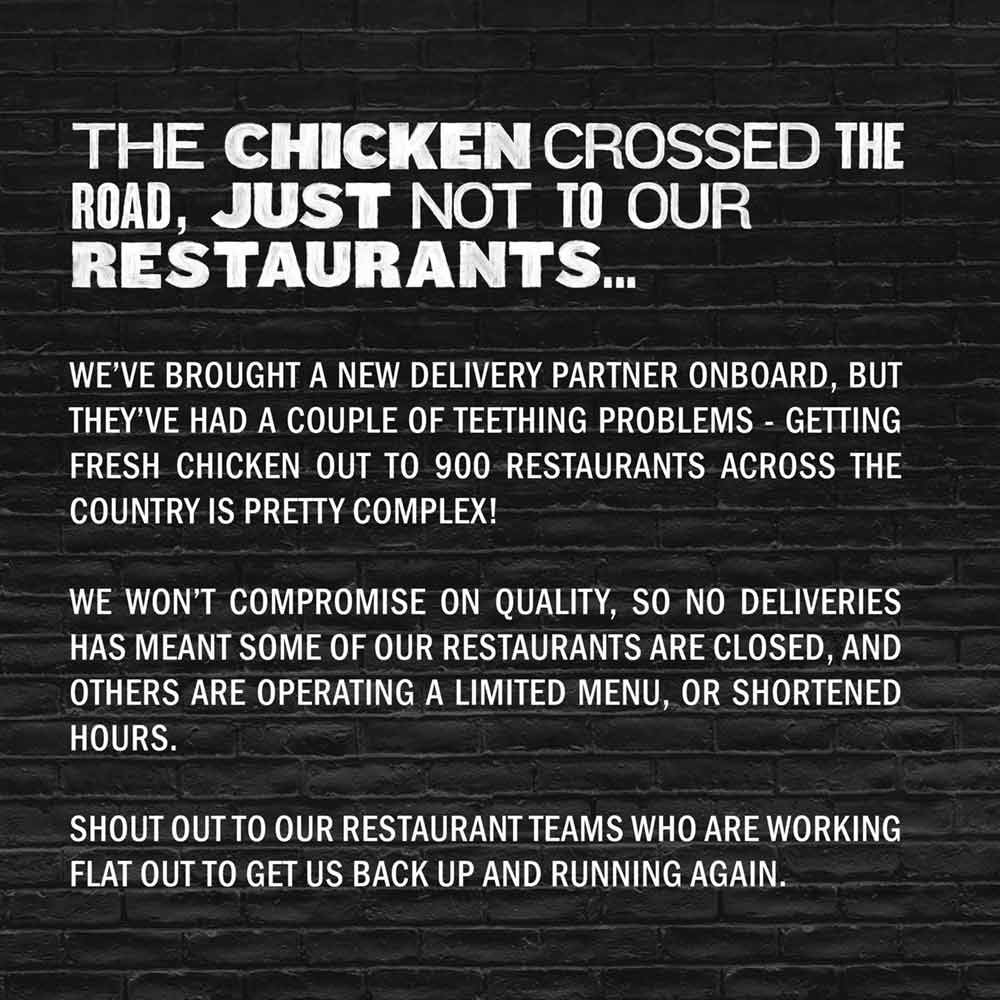 There are too many brands around that think they are the dog's whatsits. This great article by Ian Leslie, writing in the FT a couple of years ago, has lots of great points in it, but this thinking around brand perception is particularly interesting:

"Brands are not the rich sources of differentiation marketers like to think of them as…Marketers are usually surprised to hear this and find it hard to accept - they like to imagine that people who buy their brand are deeply attached to it. But the data show that even people who regularly favour one brand over others will pick a competitor if it happens to be more easily available or cheaper that day."

Leslie also makes the argument that TV advertising is far from dead, being a great way to make us remember a brand when it comes to the point of purchase. So, if you have a spare £100k, maybe a TV advert that stands out from the rest of your competitors is the answer? But if you do have that kind of cash, you need to be careful.

Here is a very different kind of banking advert from Lloyds:

It is so different, that it is basically an advert for a mental health charity, with Lloyds' logo pasted on it.

We've blogged on banks pretending they don't actually do banking before. Want to know why they do this? It's basically to deflect attention from them doing this (see right) kind of scandalous shizzle in the shadows.

There is nowt wrong with a company doing their bit and giving something back (something that we at Gasp are actually doing (to be announced shortly), but this effort from Lloyds just seems conceited and contrived. But it won Channel 4's Diversity in Advertising award, so it must be good, right? It is a lovely, moving bit of film, no doubt, just not sure it is even an advert though. Well, not for Lloyds anyway.

So don't force it when trying to be different and be something you are not. Brands do seem to be getting carried away with conveying their social purpose, trying to make the world a better place.

I'll leave you with this quote from a senior marketer from Diageo (via the Ian Leslie article) which offers a huge glimmer of hope to those of us banging the media-neutral-drum. They're starting to hear us after all...

"After 10 or 15 years of f**king around with digital we've realised that people don't want to 'engage' with brands, because they don't care about them."

Having never been one for keeping too many records lying about, The Blogfather sticks it to data this week, and wants to ask you something.

The Blogfather laments the nature of the British summer this week, before meandering off on a musing barge called Context in Advertising.

It’s the newest installment in a series from Weiden + Kennedy, New York. A continuation of their theme ‘Whatever’s Comfortable’.