In a dark, dark world, here come the brands to cheer you up.

The Blogfather provides a welcome tonic to the swathe of festive schmaltz as he casts his somewhat cynical eye over the Christmas ads offerings.

The Blogfather once applied for the position of Father Christmas. Didn’t get it. Shame. Would’ve made changes.

It’s all rather grim currently. The clocks going back mean, on leaving work, you’re faced by a black, cold void, coupled with transport delays. The love for your favourite star has been tainted by them either evading tax or being caught up in a sexual harassment claim. Aston was inexplicably voted off Strictly.

So what can be done to help change our mood, short of leasing the Fisher Price Jet you’ve bought your child for Christmas back to them to save on tax?

Well, here comes the avalanche of Christmas ads to cheer you up. Yay.

The Blogfather once applied for the position of Father Christmas. Didn’t get it. Shame. Would’ve made changes.

But I digress. As ever, the supposed jewel in the ad crown is John Lewis, almost by default. Although, having watched it, it’s a bit underwhelming. It seems to lack the emotional heart string tug of previous ads. It ticks a lot of boxes for the John Lewis model; huge budget, esteemed director, modern cover of a classic song, but maybe that’s the issue. After a decade of the doing the same thing, you hit a ceiling. Anyway, have a gander yourself:

...you can’t put naughty names, or even names laced with current trending infamy, but I found a way around that, which invariably is the most fun part of such things

One thing I quite liked from the marketing paraphernalia that sweeps around this ad typhoon is a link to a ‘Create your Own’ monster microsite. You can while away a few minutes, even choosing the type of fart your monster has. Annoyingly, you can’t put naughty names, or even names laced with current trending infamy, but I found a way around that, which invariably is the most fun part of such things. 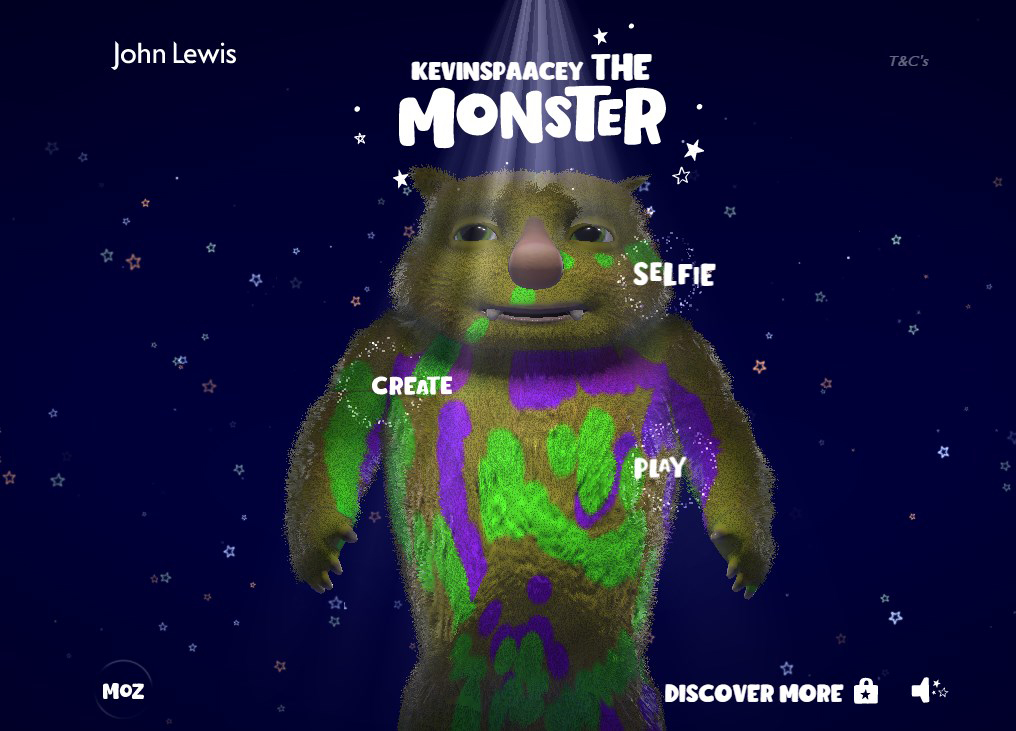 So maybe this is the year John Lewis gets usurped as King of Christmas. Who are the pretenders?

M&S have retorted with a volley of Paddington Bear. It’s M&S and Paddington Bear. ‘A Clockwork Orange’ it ain’t. If you haven’t seen it, it looks exactly how you are imagining it, so I won’t bother with a link. Well, other than the scene when Paddington briefly lapses back into a feral state and mauls a postman, whilst live streaming himself on Facebook. M&S announced this week they are accelerating their closure of underperforming clothing departments. I don’t think Paddington will save them.

Debenhams have gone for a modern take on Cinderella, with a bit of ‘Fake News’ and social media storm thrown in. Very 2017. By ‘Fake news’, what they’ve done is put a story on the front page of the Metro with the headline; “Shoe Hunt Sparks Social Media Storm’, as a piece of content to support the campaign, although the effect of the whole piece in undermined somewhat by ‘ADVERTISEMENT’ being emblazoned at the top of it. The legal requirement for ruining good ideas by clearly labelling them as adverts is a blog for another day, won’t start on that now. Respect to Debenhams for at least trying to do something a bit different, but an advert about a love story going viral, in the hope of having an advert that will itself go viral... well, maybe it’s a bit too knowing. 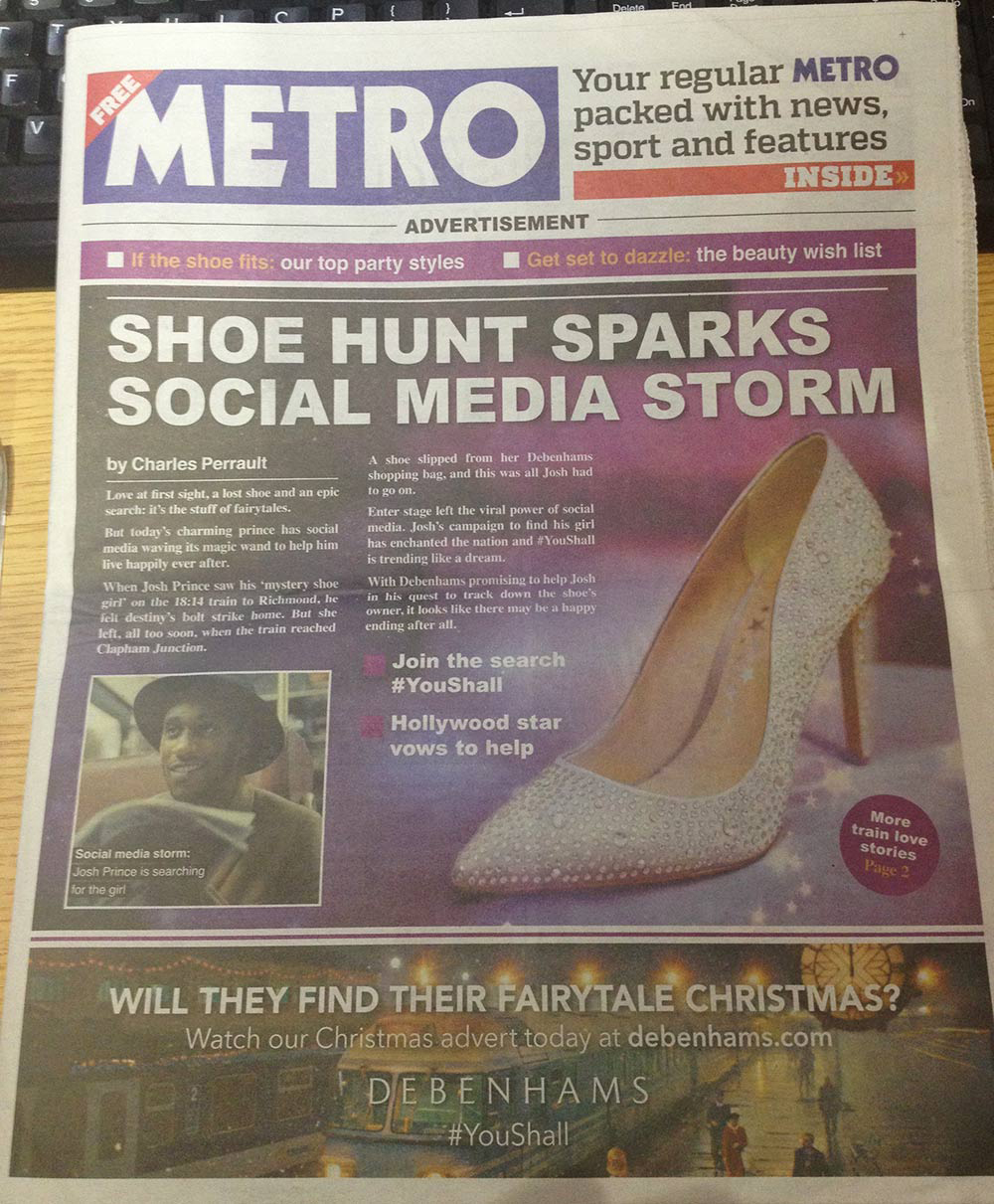 Curiously, all three of these adverts have multiracial couples/families at their centre. I assume all three brands attended the same advertising forum on ‘How to avoid what happened to Dove’ (if you missed it, Dove had an advert that made a black woman morph into white woman). This is indicative of the hyper-sensitive atmosphere brands have to tread carefully through, for fear of being accused of saying or doing anything remotely out of line. Another check box ticked.

In the days to come we will see brands (probably Aldi) piggy-back on the frenzy that now goes hand in hand with the annual John Lewis ad by making parody rip-off versions for social media. Sainsbury’s, Waitrose et al will also release their festive offerings in the coming days.

On the other end of the Christmas ad spectrum as it were, an honourable mention must go to this advert for Dick Whittington at the New Wimbledon Theatre. All seems normal, on the face of it; just your regular panto. However, this production was for Christmas 2016.

This rascal of an ad first appeared in one of our blogs back in June, and is still on show at two train stations (maybe more). Keep an eye out for it if you ever have the misfortune to visit Romford or Brentwood. It will be interesting to see how long this ad runs for. I foresee a dystopian, Blade Runner-esque landscape…with an ad for a panto featuring Tim Vine. Either that or Exterion need to review their rates.

Just FYI, this year it is Al Murray in Jack and the Beanstalk at the New Wimbledon Theatre.

The Blogfather takes a carving knife to the Christmas advert offering to see if there are any nice, succulent bits for you to gorge yourself silly on.

The Blogfather looks back at what was certainly a year of progressive change for women in media, but by how much?

The Blogfather applies his acerbic wit to the advertising phenomenon that is the John Lewis Christmas advert The Man On The Moon.

‘Tis the Season to be Jolly

I sit in a coffee shop, sipping a cappuccino. People watching through a slightly frosted window.