Will the Real Creatives Please Stand Up?

Don’t Try Too Hard To Be Innovative.

A somewhat niche blog this week. For the last while I’ve kept stumbling over stories on how standing at work improves creativity (oh, and your health). So I thought I would delve into this and the products out there and see if there is anything of interest and use.

It’s like an A level D&T project that is not really that marketable in the real world but because you are 16 the teacher just runs with it rather than saying: ‘you know that’s just a stool placed on a table, right?’

I should say that I write from a biased position of slumpage. In profile, my posture must resemble a Formula 1 driver in the cockpit. Our in-house ergonomics guru, Giles, bought us all some Satechi monitor stands recently, which has certainly upped my posture and eye line by a couple of inches, but I’m still a bad sloucher.

This fad has come about, in part, because of the prevalence of balanced and reasoned headlines in the media like; “Sitting is Killing us!”

No it’s not. Being mortal is killing us. You can basically make a case for anything being deadly. Vending machines kill.

But I digress. For the creative who wants to eek out more creative juice via standing we first have the StandStand. So good they named it twice. Maybe. It’s a stand for your laptop for when you are standing. In public places. That’s what it is.

Ergonomically, this product is somewhat restricted. It’s non-adjustable. But don’t worry, as you can order different sized stools StandStands. However, I imagine you will encounter tables of variable heights as you flounce your way through the hipster-riddled pop-ups of Hoxton, so it may not be ideal.

It’s not a bad idea. But it’s not great either. It’s like an A level D&T project that is not really that marketable in the real world but because you are 16 the teacher just runs with it rather than saying: ‘you know that’s just a stool placed on a table, right?’

It got financed via Kickstarter, which is a genuinely fascinating phenomenon, and aids all the independent creatives out there who want to see their concepts bear fruit. But naturally, quality control is a bit of an issue. There are a lot of people with too much money financing average ideas.

But it is under the “Other Uses for StandStand” section on Kickstarter that we get closer to the truth, as evidenced in this photo. 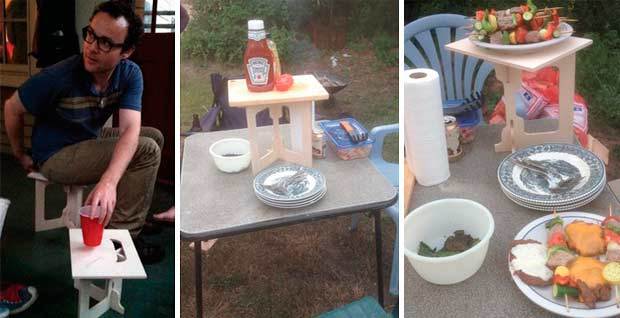 'Hi, I’d like to order a StandStand for my laptop. What’s that, sorry? Why don’t I just use my chair? You crazy.'

This is the StandStand’s ‘Rogue Trader’ caught-on-camera exposed moment. In the privacy of it’s own home it lets its guard down and reveals itself to be merely; a stool. In the other two photos, to be fair, it’s just helping out at a friend’s BBQ. That’s OK.

For the office-based creative stander-uppers we have this: The Stir Kinetic Desk M1.
Firstly, anyone that uses ‘unexpected’ when describing a desk’s aesthetics is probably papering over a lack of substance. It’s quite a cool desk, I suppose. I imagine they must mean it’s certainly ‘unexpected’ that is costs a whopping $3,000.00 for a desk that has basically been fitted with adjustable legs and has had a serious filing/sanding taken to its edges.

“The desk that changed everything,” they state. That’s true, and is in no way hyperbolic.

Whilst standing at your Hobbit-complex-inducing desk you could invest in one of these. A Back To The Future-esque hover board that does not actually hover, nor move (well it wobbles about a bit). I imagine if you were due to go on a cruise for your holidays, and you did not have your sea legs, and this concerned you, then you should probably have your last week in work stationed on one of these.

It seems that a lot of these products are currently only available in the States. I’m not sure if there is anything that can be read into that.

There are some cool creative tools out there, don’t get me wrong, like this mega useful portable conference call unit from Spracht, and I have no doubt that sitting for long periods of time is bad for you and negatively impacts your health.

But there is a fine line between vigorously pursuing an idea you believe is great and just trying too hard to be innovative; crow-barring out a niche need that maybe just isn’t there. That’s why we have got the rehashing of the foldable stool. But I could be wrong. The StandStand may fly off the shelves. It’s also part of a larger trend of there being too much of everything: too much data, too much content, too many average apps, and too many mediocre designs lavished with unwarranted praise.