A holiday from hell, designed for you (oh, and tell us how we did)

The Blogfather will certainly tell you how you did, Thomson. A quite staggering example of how a brand can get the customer experience so horribly wrong gets a proper retort.

...the (pregnant) woman stranded and left to fend for herself in foreign climes

Imagine if you will, a married couple travelling across Europe. Carrying a young daughter of just 20 months old, and burdened by three large cases. The woman is heavily pregnant. They are just trying to get home. And then, inexplicably and suddenly, they are sundered; the woman stranded and left to fend for herself in foreign climes. The man and young daughter travel on, with just a packet of free salted peanuts as compensation for being dramatically parted from wife and mother.

Salted peanuts aside, it sounds like the start of a Russian novel.

But no, this is the end of a Thomson/TUI holiday.

Usually the asking of your friends and colleagues how their holiday was results in just being given a brief overview of the weather, but on this occasion The Blogfather got told a quite shocking holiday from hell experience inflicted on the Gasp founders, Giles and Sophie. So here’s what happened.

Giles and Sophie recently went to Cyprus for a well-earned break. Sophie is expecting her second ickle Gasper in August, so naturally to say travelling is uncomfortable is an understatement, especially with a little ‘un to look after. All was good on the way over, not a bother, and not a question as to Sophie’s condition.

But just 10 days later, on the return home, it was a different story. On arriving at the airport check in desk they were told Sophie couldn’t fly without a letter from a doctor. Despite reminders that they’d flown to Cyprus with no problem, they were met with a blunt refusal and no willingness to discuss. Err, Duty of care? Somewhat stressed and knackered, they grabbed a Thomson rep, and explained the problem to a chap called Jamie. He was great, to give him his dues. He got on the phone and spoke to the powers that be, and stated they would merely have to identify themselves to cabin crew so they could help and keep eye on Sophie.

And why check them in and make them queue for ages to get through security, just to then deny her access to the plane?

Panic over, seemingly. So luggage got checked in, and they proceeded to go through the very busy airport security, during a Cypriot heatwave, with hand luggage, toddler, and buggy. Exhausting.

Fast forward 45 mins and the boarding alert came up. As they got to the gate there is an announcement asking for Mr Giles Edwards to identify his party – seemingly Thomson had gone that little bit further for their customers and arranged to help Sophie on the plane first.

Oh no. Far from it. The abrupt woman from the check in desk, A. Socratous, was back with a vengeance, and had a posse of colleagues in tow. She announced in front of a small space packed with all the plane’s passengers that Sophie was not allowed to board. Shocking. Unbelievable. Needless to say the next 5 mins were insanely embarrassing, stressful, and emotional. Giles and Sophie acted in disbelief and questioned what to do. You’d flown her here? You can’t just leave her? You need to see a doctor and get a fit to fly letter was the curt reply. But how do you find a doctor on a Sunday evening in a foreign country with bags already in the hold, knackered and with a stressed toddler? And why check them in and make them queue for ages to get through security, just to then deny her access to the plane?

Giles rang an emergency number for Thomson, told them the situation, and requested to speak to the plane’s captain, but all to no avail. What’s more, the fact that two of the bags were in Sophie’s name meant they’d had to get them off the plane to leave with her! This was ultimately over-ruled and Giles was able to fly with all luggage checked in. Giles was left on his own with the little one on a 5-hour flight, and then had to negotiate passport control, baggage reclaim etc. with toddler, buggy, hand luggage and 3 big suitcases at the other end (Thomson had offered help when landing in the UK, but it never materialised). The word stress doesn’t come close to capturing it.

What happened to Sophie, you are thinking. No, she is not still in Cyprus, thankfully. She ended up getting a taxi to an emergency hospital (arranged by Thomson to their credit), saw a doctor, got a note immediately, then back to the airport and on the next plane, which landed at 1am UK time and was full of late night Ayia Napa teens stinking of booze and coughing their guts out. How, in any way, was this the best course of action?

A word of note must go to the very good head of cabin crew, a gentleman called Anthony, who ultimately wouldn’t let Sophie on plane, but was kind and reassuring. He (along with the other passengers) was personally disgusted with what happened, and insisted that Giles make a formal complaint on his return.

Somehow the logic of leaving a heavily pregnant woman alone in a foreign country was more logical than letting her fly, despite the fact they’d flown her out to Cyprus a mere 10 days prior without hesitating, and there had been no complications to date.

This is indicative of what happens when humans feel they have to follow procedure at all costs, and utterly lose sight of the fact they are dealing with human beings. This caused so much friction and distress, it defies common sense. There’s an argument for saying it defies medical sense too. If you are genuinely considerate of a pregnant woman’s welfare, do you really cause her severe distress by parting her dramatically from her husband and child and leave her go back into a foreign city in 40-degree heat on a late Sunday evening in search of a doctor’s note?

If you are genuinely considerate of a pregnant woman’s welfare, do you really cause her severe distress?

Here’s a pertinent quote from a recent blog by Colin Lewis:

“Let’s be clear about a bigger point. Nobody cares about your rules or your reasons for introducing friction. That’s your problem. What people care about is themselves, and what they are trying to do. Friction is toxic for brands.”

How often do you hear about what a great experience friends and family had with a brand? It is more the stories of frustration that get attention and are memorable.

Thomson should ask themselves what stories their customers are hearing, and telling, about their brand. There is a broad choice of holiday from hell content on Thomson on the internet, and this is the latest piece.

We believe in being constructive and solving problems here at Gasp, so what could Thomson do? A Gasp hero, Rory Sutherland, is a big fan of board level Customer Experience Directors, something that British Airways appointed in recent years. A quick Google didn’t reveal Thomson had one, so if they don’t, maybe it’s something they should consider.

But as of now something has broken down at Thomson. The Thomson brand name is currently being phased out, and is being replaced by TUI. Maybe this is part of the problem. It sounds like an accounting software company. There is certainly a disconnect with the physical customer experience.

The last communication with Thomson, as you can probably tell from the start of the blog, was an automated email of perfectly awful timing that invited Giles to ‘tell them how they did’; merely fanning the flames of anger to create a highly memorable denouement to the whole saga. 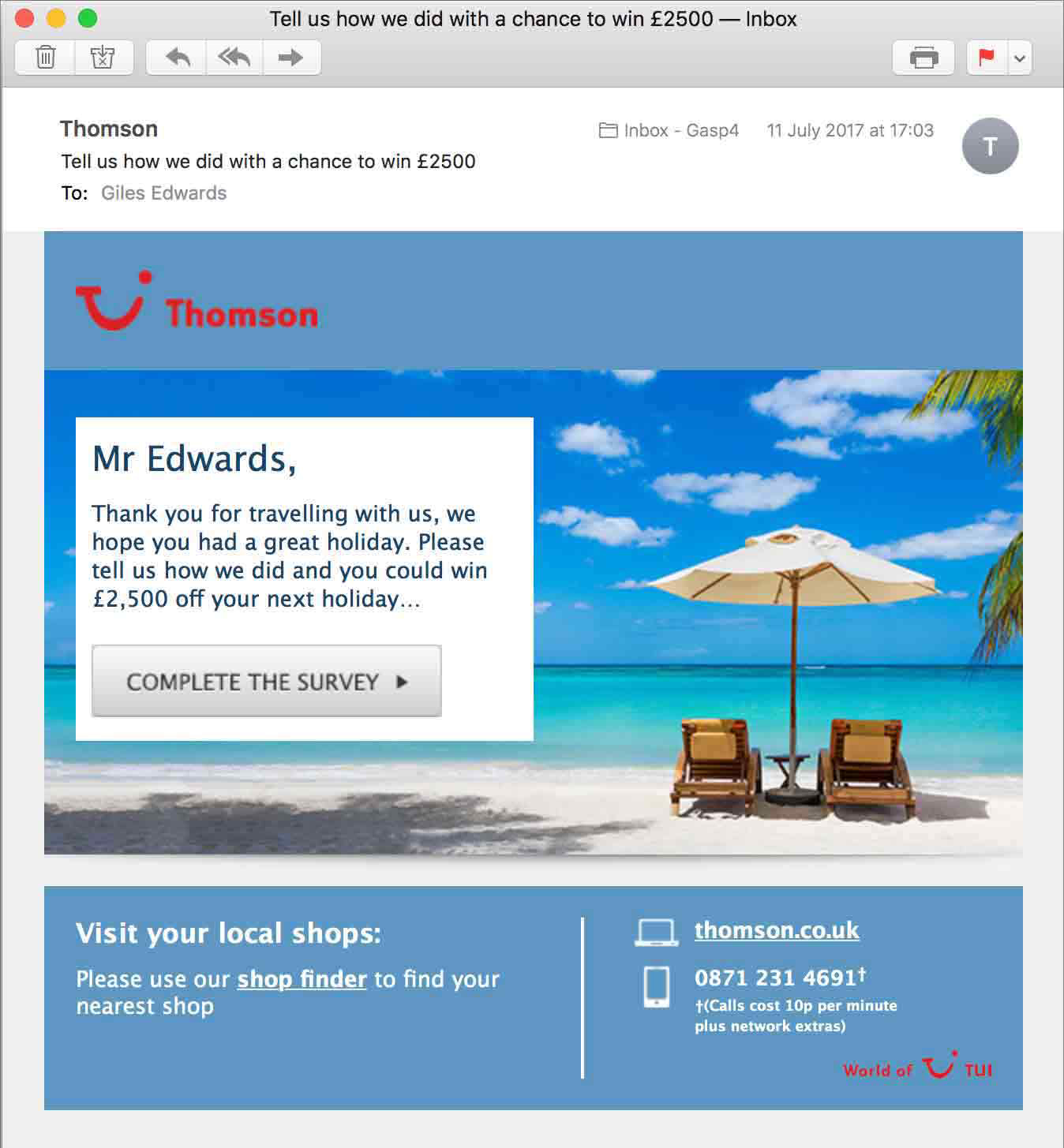 Thomson would have done well to have considered Behavioural Economics, specifically the Von Restorff effect. Quite simply, things that are distinct from the norm stand out, and become memorable, etched on the brain, be it good or bad. A great example of this is the Virgin Airlines salt and pepper shakers, covered in this blog. A negative example would be the email Thomson sent out. Thomson are also victims of the Peak-end rule; where people judge an experience based primarily on how they felt at its peak of intensity and at its end. Both of which were shocking in this case.

So, Thomson, consider this blog telling you how you did, and also consider it an official complaint in writing (Booking Ref: 3823291). We invite you to reply.

The Blogfather defends marketing and goes after the Thomas Cook top brass who creamed off profits as they sailed the company into the rocks.

The Blogfather has left many an irate online review in his time (especially for outlets of Millets). Here he dives into and dissects the subject, for your reading pleasure.