Just when we were thinking it was old, over-saturated news, a very different use of the phenom-furore caused by ‘The Dress’ caught my eye this weekend, an advert from the Salvation Army.

Straight away we ran our own social media campaign off the back of it on both Twitter and Facebook. We made sure that we updated all of the creative to reflect this opportunity. Onsite we changed the homepage to promote the dress added ‘#TheDress’ to the product title and ran a competition to win #TheDress to increase subscribers.

Just to fill in people that may have missed it. A girl posted a photo of a dress to her Tumblr account at the end of February, which went viral. Seemingly at the end of her tether she exclaimed: what is the colour of the dress? It divided opinion as to whether it was white and gold or blue and black. The massive schism of millions of people into two camps was basically put down to an optical illusion.

Naturally, the brand whose dress it actually was, Roman Originals, jumped all over it, quickly and astutely. As their head of ecommerce, Adrian Addison, told Marketing Magazine:

"Straight away we ran our own social media campaign off the back of it on both Twitter and Facebook. We made sure that we updated all of the creative to reflect this opportunity. Onsite we changed the homepage to promote the dress added ‘#TheDress’ to the product title and ran a competition to win #TheDress to increase subscribers."

Yet other brands also reacted fast. There was no surprise to see Lego, the subject of our blog two weeks ago move with swift social media dexterity to get in the mix. Unsurprisingly, they were amongst the best brands to ride the viral wave.

But back to the Salvation Army advert that certainly arrested my attention. It works as it immediately evokes intrigue into its ambiguous nature. You could just glimpse it and think it a real fashion advert. On a quick, closer inspection, it is clearly not. With the strap of: ‘why is it so hard to see black and blue’, this is a powerful message on raising awareness of the abuse of women. All the other content in relation to the dress is of a jovial, humourous nature and is truly saturated. So to take it in the opposite direction is a very well conceived piece of reactive marketing.

In fact reactive marketing, the close relation of real-time, has seen some great outdoor advertising. You can still appear witty, even with a good few days of time lapse. A great example here is Newcastle Brown Ale owning Stella for using the word ‘chalice’. 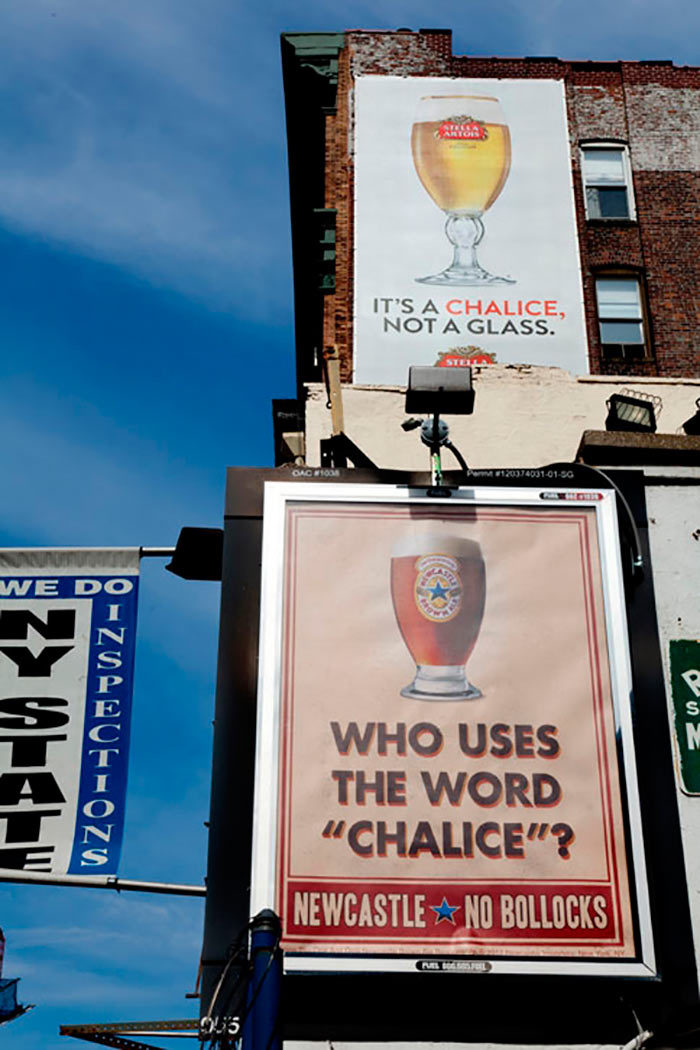 Real-time marketing is almost a form of improvisational comedy: Whose Vine is it Anyway? It can be a perfect opportunity to engage with your audience by showing character, wit and humour, something which the graphic designer Alan Fletcher said is “the shortest distance between two people."

Yet despite that, often a lot of planning goes into what seems to be the off-the-cuff. Although this is no guarantee of success. Arguably one of the largest fails in real-time marketing came from furniture store made.com who, in relation to the imminent announcement of the result of the Scottish vote on independence, prepared two self-promotion responses, (neither of which really added anything to the brand anyway) but ended up going live with the wrong one, saying they had “launched into a new country.” Contrived stupidity is never a good thing.

Literally minutes after Madonna fell on stage at the Brits recently I saw a tweet, which I will have to paraphrase somewhat, along the lines of:

Can literally hear all the real-time marketers screaming: just tweet something about Madonna now!

This succinctly conveys a problem with real-time marketing: just posting something for the sake of it. Our creative director Giles attended a Drum live event last year where a key question that Barclays head of marketing, Sara Bennison, said was always important to ask was; “what’s the point in doing this?” You can actually watch Giles talk into a camera on this link, if you like. It’s not as good as his random, impromptu appearance on Countryfile, where he alienated an entire community of farmers, but it's still a good watch.

Pizza brands seem to be particularly shite at real-time. In relation to ‘The Dress,’ Dominoes inflicted us with an awfully half-baked idea. The mass pizza-clone purveyors tweeted: “This is awkward, it’s actually red and white”, accompanied with a picture of one of their pizzas. Cheers for that.

In the past, Pizza Express tweeted “may we humbly suggest calling the #RoyalBaby ‘Pizza’?” Although, it’s worth making the point that more people were probably talking about Pizza Express for being so unimaginative, than if they had actually gone all Oscar Wilde on their social media.

You have to be sure you are contributing appropriate, relevant posts, as in the same way that new media/digital allowed everyone to become a photographer and journalist (via smartphones), the world will become littered with poor real-time marketing in the way we’ve become drenched in rubbish content.

The real challenge remains the same. It always will.