There’ve been plenty of laughs in the Gasp office today, partly due to the fact it’s Friday no doubt, but also because we’ve all watched this new ad from Durex several times.

Thank you to Durex for proving to us that there’s still few things funnier that a man getting hit in the bollocks.

You could argue that condoms are no laughing matter, preventing unwanted pregnancy and the spread of STIs. But sex is joked about so ubiquitously that when trying to sell them I think a humourous ad campaign is more or less mandatory.

This is an effective polemic against fatherhood which is apparently in complete defiance of the zeitgeist; currently, England faces the biggest baby boom in 40 years with up to 20,000 more babies born this year than last. No doubt the newest addition to the House of Windsor and the hysterical media coverage thereof will have contributed to this. Plenty of brands attempted to ‘newsjack’ the royal birth and reflect a bit of the goodwill onto themselves, some did it better than others, this is an especially pathetic example; 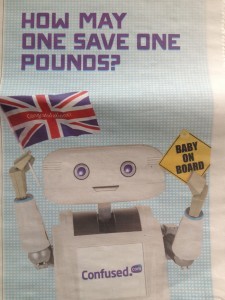 So it’s nice to see a gesture against the times from Durex, reminding potential parents that it’s not all familial bliss!

Particular highlights for me here are the father’s fake smile as he turns away from the mother towards the BBQ, and of course the slow motion ending, the melancholia of Beethoven’s Moonlight Sonata works brilliantly as a soundtrack as well.

Thank you to Durex for proving to us that there’s still few things funnier that a man getting hit in the bollocks.