Apparently nipples are simply beyond the pale in good old Middle Earth.

the ads have proven efficacy, apparently they precipitated a 50% increase in Scottish women contacting their GP to get themselves checked.

The New Zealand Breast Cancer Foundation (NZBCF) had hoped to use images lifted from a T.V campaign by NHS Scotland that encouraged women to get tested by showing naked breasts with possible signs of cancer.

However, the Commercial Approval Bureau (CAB) in New Zealand has upheld in this instance, the principle that images of nipples are not permitted in T.V ads.

It seems like a harsh ruling, especially since the ads have proven efficacy, apparently, they precipitated a 50% increase in Scottish women contacting their GP to get themselves checked. We’ve previously blogged about the value of ‘shockvertising’ in public service ads and indeed some women have even claimed that this campaign saved their lives; by showing possible cancer indicators of which they were previously were unaware. 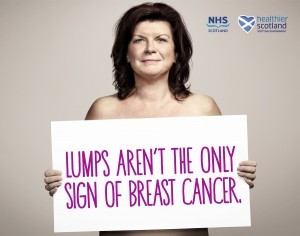 No doubt CAB is thinking of the slippery slope argument here, that if they make an exception in this case regardless of the public service element, they’ll have to continue making exceptions and the ‘no nipples’ principle will become meaningless. And to some extent I have sympathy with this position, after all, they cant open the door to brands using titillating ads willy nilly. But since the NZBCF ads would be shown after the watershed anyhow, like HMRC has with charities, why can't CAB have separate standards for NFP organizations that demonstrate public benefit?