How not to write a case study, and be wary of a change in brand tone of voice

A piece of seemingly unlabelled sponsored content, and a beer giant with the duplicity of a politician, annoy The Blogfather this week.

I don’t think I would have noticed it was, in effect, a sponsored piece, if it wasn’t for the fact that is was so faakcing boring

We often have these moments, certainly these days when there is so much crap stuck up on the internet. It’s those moments that leave us thinking; I’ll never get those 5 minutes back. Or in this case, those 6-9 minutes back, as per the estimated length gauge for the Campaign Magazine ‘article’ I read.

I clicked on it as it seemed to be the most prevalent news piece on the Campaign home page, entitled; ‘How ‘helpful banking’ translated into digital transformation for RBS’. Granted, not the most captivating of headlines, but I assumed Campaign had selected a journalistic pearler for my mind to digest.

They hadn’t. What they’d done, I assume, was to take a few quid off SapientRazorfish to stick said agency’s case study of them banging on about their work with NatWest front of house, although this wasn’t immediately apparent.

Now, I’m a fan of native advertising and articles when it’s done well. Up until this week I thought I didn’t care if it was not marked as sponsored, but now I can see why people feel affronted by being duped. I don’t think I would have noticed it was, in effect, a sponsored piece, if it wasn’t for the fact that is was so faacking boring. I think I actually prefer the kind of sponsored content shown here. So shockingly shite it’s humourous and endearing. I collect these adverts like cherished things. 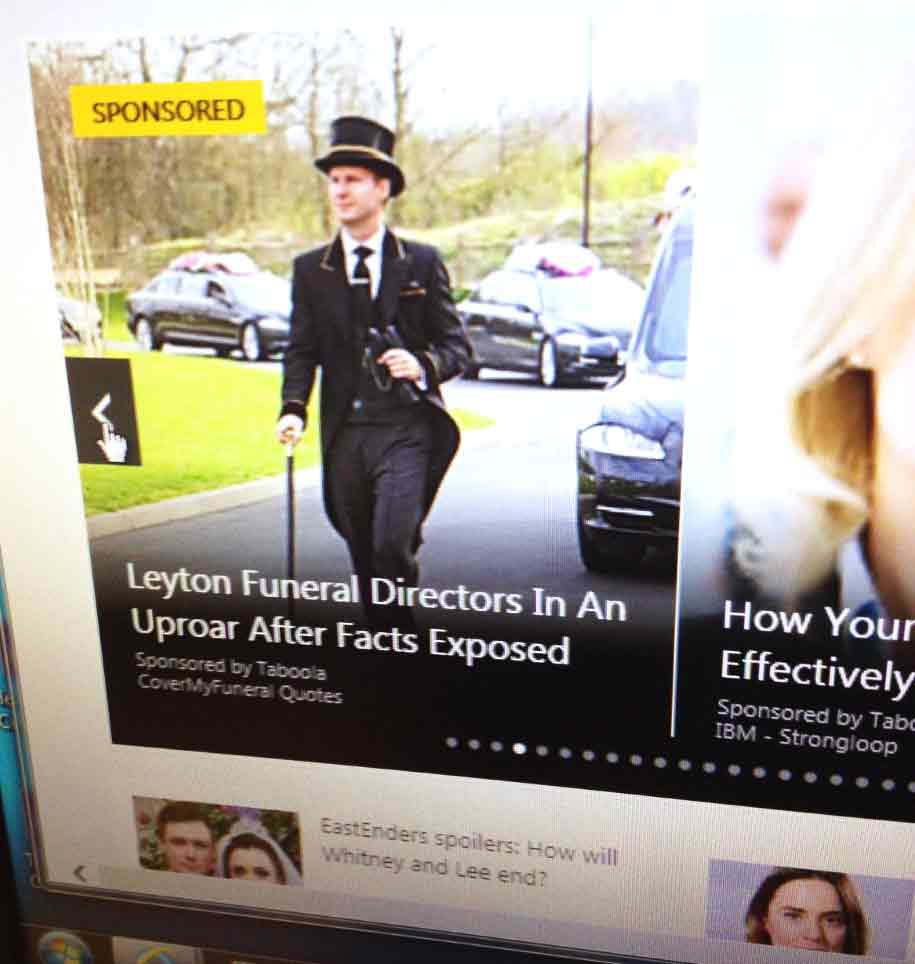 And there’s another point here. If you are going to write a case study make sure it’s at least vaguely interesting. Ok, we all have to write case studies that arguably aren’t within the most sexy of sectors, but we can always jazz it up a bit, or make it ‘Gaspy’, as we try to do with our comms here. Especially if it is going to appear in a place where so many people are going to read it.

Assumingly SalientSwordfish put all their imaginative copywriting into the agency’s quirky post-merger name, and left none over for the writing of case studies. And it is stupidly over-long. About halfway through it states; “Here are the six key services they launched in order to transform the business.” Surely it can’t go into detail on each one? Oh, it can, and it makes each one into a case study of its own, with a ‘Challenge-Solution-Results’ structure. At least they were on to something here. That three-punch structure works well in terms of communicating what a great job you’ve done whilst realising that people probably don’t want to read for longer than two minutes about what you did. If you want an idea on how to write a succinct case study, here’s one we wrote recently, for an impactful DM piece we did for Epson. Keep it simple and to the point.

The premise for re-branding the banking industry is actually quite simple: no one trusts banks to look after and process money, so banks are all pretending they don’t actually look after your money. Barclays is now a careers advisor to young people, Lloyds have…seemingly been breeding Warhorse-calibre work horses for 150 years, and the Halifax is now a retirement home for classic cartoon characters. The Halifax have a piece of video content entitled ‘Find out what happened when Top Cat visited the Halifax’. It’s worth a look, as he walks out in frustration halfway through his consultation, porns Officer Dibble’s watch at the Money Shop, then goes and gets pissed on a tenner at the Wetherspoons.

Talking of going down to the pub brings us neatly onto my second cause of annoyance this week. The advertising showcase that is the Super Bowl took place on the weekend. Oh what a difference a year makes. Last year I wrote about a Super Bowl ad from Budweiser with an irksome nationalistic tone that seemed to forget the brands international, immigrant beginnings. A cynic would say that Budweiser has, a bit like a politician, changed its beliefs and views for the sake of maximising the impact of an advert by capitalising on the current political climate in the U.S. But maybe Trump’s antics have led to Budweiser carrying out some soul-searching. Either way, here’s the ad below.

But you need to be careful not to crack your brand pillars with duplicity, or even by simply losing focus of who your customer is.

At a time where Trump is looking to ban immigrants from entire states purely because of their nationality, it is a rather poignant advert, if we leave cynicism aside. Maybe it doesn’t really matter what you did last year. Most people probably won’t even notice the hypocrisy. But you need to be careful not to crack your brand pillars with duplicity, or even by simply losing focus of who your customer is. Those same beer drinking, blue collar workers that Budweiser got whoopin’ and a hollarin’ with their advert last year are now vociferously lambasting them on the murky bottom half of the internet in the comments sections for their latest advert. No brand wants to alienate their key audience and majority consumer.

A Super Bowl ad from Budweiser stokes the fire of annoyance in The Blogfather’s real ale loving gut.

The Blogfather looks at the advertising phenomenon that is the Super Bowl: ambushes, adverts and all.

They say never work with children and animals in Entertainment, but the opposite appears to be the case in Advertising. A couple of new, high profile adverts have been released in the last few days which encapsulate a lot of what I have found to be disappointing in ads this past year.