You need this type of insurance because this problem is so common, that it's even been been caught on Street View

I like the fact that the video immediately addresses what’s probably the most difficult issue to crack when marketing an insurance provider – people just don't get excited about it – it is insurance after all.

What they’ve come up with is actually ‘well good'.

Big words I know, but surely everyone’s seen at least one funny or unusual picture from Google Street View, and the idea to collect them to build an insurance brochure is a real creative flourish.

Using images captured from real life, gives the brochure a feeling of validity that must be pretty unique. Psychologically it says to the prospect; "You need this type of insurance because this problem is so common, that it's even been been caught on Street View."

Perhaps my favourite thing about it though is the social media element. Because Ogilvy could have just got a hungover intern to sift through BuzzFeed and various blogs to find the best images to use. And it would have taken a day.

But instead, they've crowd-sourced them through Facebook, which clearly garnered great results in terms of publicising the brochure, driving brand engagement all that other clever stuff.

The only other thing that leaped to mind when I first saw this, was the need to rigorously curate the images on Facebook. When Ogilvy pitched the idea to Allianz, someone at the insurance firm must have known that the funniest and most shared images from Google Street View, are generally those where there’s a degree of illicit activity involved.

Allianz has a brand to protect, and how would it look if it was running a Facebook group with images like this one plastered all over it? 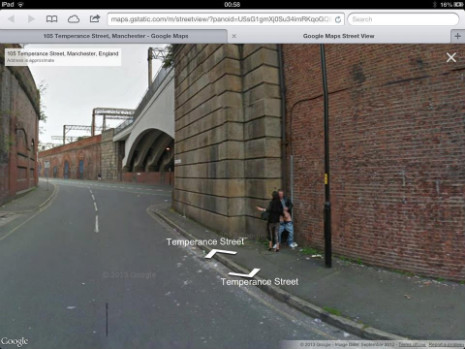 I wonder if there’s a kind of insurance available for when that sort of thing goes awry?