Here’s a fun ad from the McMillan agency in Ottawa, produced as a piece of self-promotion. 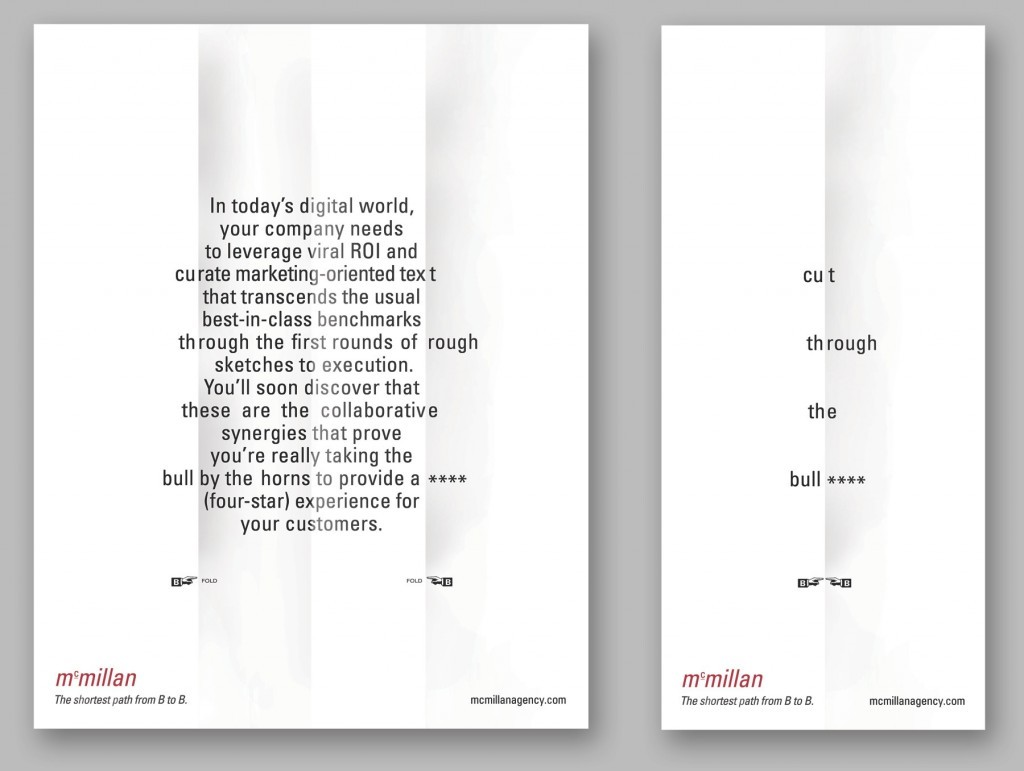 In a recent anonymous survey 26% of executives admitted to using expressions they don't understand in meetings.

Anything claiming to cut through the marketing ‘bull****’ instantly gets my attention because I get particularly dumbfounded by it.

My boss Giles told me a story recently about a meeting he was present at, having just started his career at a big agency. He was sat in a meeting with a client who was splashing about great buckets of marketing jargon and acronyms. Giles had always been told that it was better to ask if he wasn’t sure of something, rather than nod along and get truly lost, so he politely interjected and explained that he was new and asked her to clarify some of the terms she’d used. At that, the client began to shuffle in her chair and garbled that she didn’t know exactly what the acronyms stood for but reassured him that they ‘meant something…’ Wise words.

I don’t think this embarrassed client was unique though, in a recent anonymous survey 26% of executives admitted to using expressions they don't understand in meetings.

One of my favourite people writing about marketing today is Dave Trott. I absolutely devoured his most recent book ‘Predatory Thinking’. In this book he makes the very good point that people generally do the opposite of what Giles did in his meeting years ago. They simply nod along because they don’t want to look stupid, and are crippled with the fear that they should understand what is being talked about. They simply say ‘yes’ believing that they’re agreeing to the right thing because it sounds complicated.

Having a jargon-fuelled workplace is fine if you’re a surgeon or a scientist, what they do is complicated by definition. I’d feel quite nervous if I heard a surgeon talking about my upcoming operation and I understood every word he said. But if you work in advertising or marketing, you’re naturally in the business of understanding and communicating with ordinary people. So wouldn’t it be a good idea to ‘begin at home’ so to speak, by talking to each other in the simplest possible way, and refrain from trying to make simple things sound complicated. That way there’s a good chance you’ll do the same when speaking to your customers…meaning they might actually listen.

Another favourite writer of mine is Drayton Bird. He made the same point in one of his recent ‘AskDrayton’ articles (of which I’m a devotee) quoting Winston Churchill; ‘"Use simple words everyone knows, then everyone will understand" - surely good advice if you work in advertising.

In the same article he also shared this absolute treat.

Sound familiar to you?In a recent anonymous survey 26% of executives admitted to using expressions they don't understand in meetings.